Do you have required Win32 Apps skipping Windows Autopilot ESP or not installing until after login ?

I saw an interesting tweet from @brucesaaaa where he talked about issues observed in multiple tenants during Windows Autopilot enrollment with required Win32 apps. 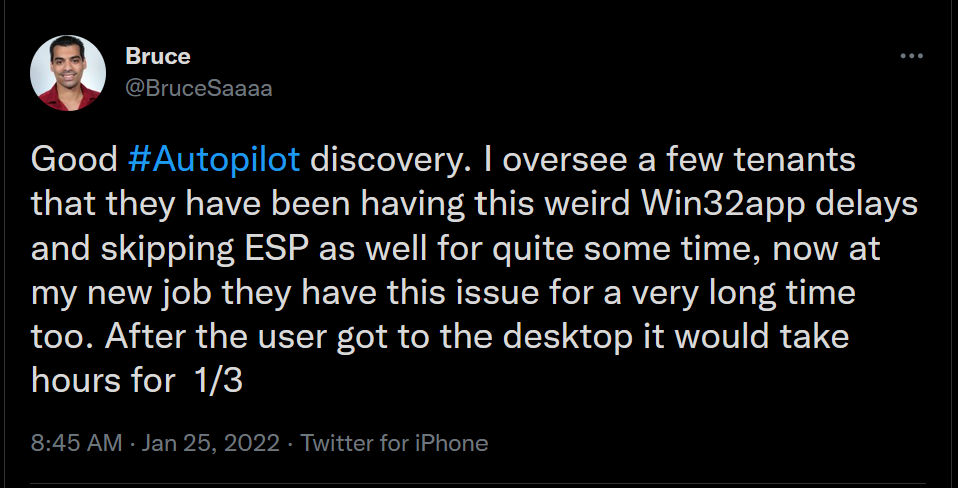 The following was seen for required deployments of Win32 apps during Windows Autopilot enrollment:

The problem was investigated and narrowed down to the version of Microsoft Win32 Content Prep Tool that the technicians were using to create the Win32 apps. The is very easy to understand as many admins simply download the tool and re-use it over and over. I’m guilty of that too !, the app I created below was created with 1.8.2.0 and the current version is 1.8.3.

I’m not sure what version of the app that caused their issues but as soon as they downloaded the latest version and repackaged their apps the problems went away.

I did some checking with a Win32 app I recently created. If you rename the app from it’s original filename.intunewin extension to filename.zip you can extract the contents. Open the detection.xml file in the metadata folder.

If you open the XML file in a suitable reader, you can see the version of the tool that it was made with by reviewing the ToolVersion property highlighted below in yellow.

If you start the Microsoft Win32 Content Prep Tool  (IntuneWinAppUtil.exe) and use a -v it’ll show the version info.

I guess that Microsoft could force that people use the latest and greatest version of their tool by scanning that detection.xml file prior to accepting the file. Or at the very least inform the user of possible problems if they choose to ignore the fact.

This should bypass any issues caused by using older versions of the tool to package the Win32 App.