using SCCM 2012 RC in a LAB – Part 13. using Role Based Administration to define permissions in the ConfigMgr Console

In Part 1 of this series we got our AD and SCCM servers ready, and then we installed System Center 2012 Configuration Manager as a standalone Primary site. In Part 2 we configured the SCCM server further by adding some Windows Server roles necessary for the following Configuration Manager 2012 functionality, Software Update Point (SUP) and Operating System Deployment. In Part 3 we configured the server further by Enabling Discovery methods and creating Boundary’s and Boundary Groups. In Part 4 we configured Client Settings, Added roles and Distributed the Configmgr Client to our Computers within the LAB, then in Part 5 we enabled the Endpoint Protection Role and configured Endpoint Protection settings and targeted a collection called All Windows 7 Computers with these settings and policies.

In Part 12 we demonstrated a new feature in ConfigMgr which allows us to Patch operating system WIM images using Offline Servicing. This means that you can apply Windows Updates by using Component-Based Servicing (CBS) to update the your previously captured WIM images. Now we will look at how Role Based Administration is used within ConfigMgr and we will create a new custom role
to allow a user (or users within a Security Group) to view Software
Update Reports. This is useful because you will probably want one team
to take care of configuring and deploying software updates, and to grant
another (Management etc) the capability of reviewing Compliance
Reports.

Note: From this point on, all parts in this series will be created using Configuration Manager 2012 Release Candidate 2 unless otherwise specified.

For more information about Role Based Administration and for best practise advice please review the following:-

In Configuration Manager 2007, administrative access to site resources is controlled by using class and instance security settings
that are verified by the SMS Provider computer to allow access to site
information and configuration settings. System Center 2012 Configuration
Manager introduces role-based administration to centrally define and manage hierarchy-wide security access settings for all sites and site settings.

What roles are included ?

The following 14 built in security roles are included:-

Step 2. Implementing a custom security role.
Perform the following on your Configuration Manager 2012 server as SMSadmin.

In the ConfigMgr console, click on Administration and expand Security, click on Security Roles. The 14 built-in roles appear. 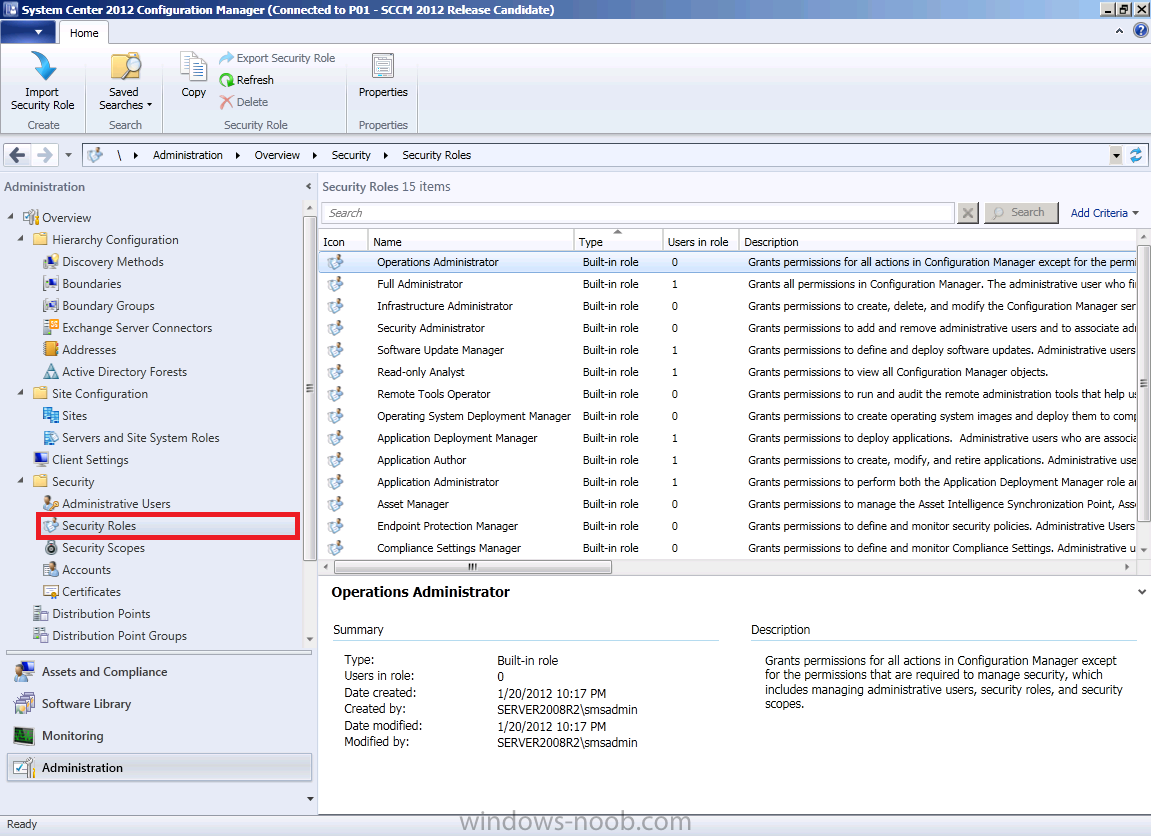 When the Copy Security Role wizard appears, give the new role a name based on the function, you can name the new role as follows:- SUM Reports Reader it’s also a good idea to fill in a Description of the role
as per the screenshot below, notice all the predefined permissions
assigned to the Software Updates Manager role appear selected in the
Permissions pane. We will edit these to only leave those permissions
that are required to run reports. 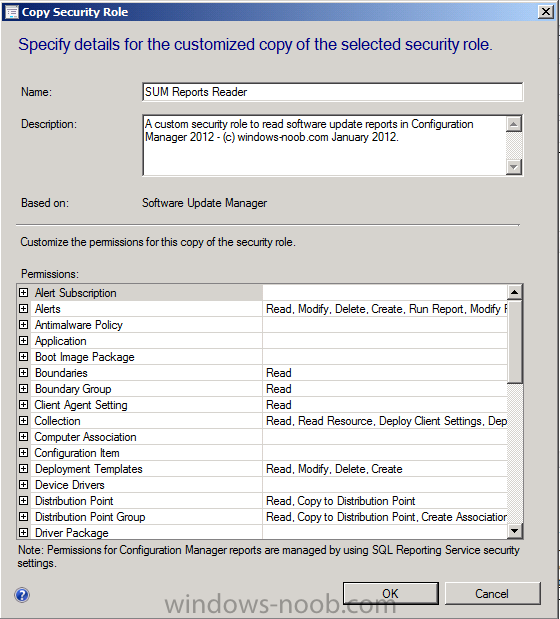 using the Customize the permissions for this copy of the security role, expand any permission not required and change it from YES to NO
(you can double click on each one to change). For example, expand the
Alerts permissions and set them all to NO as none of these permissions
is required to read reports. 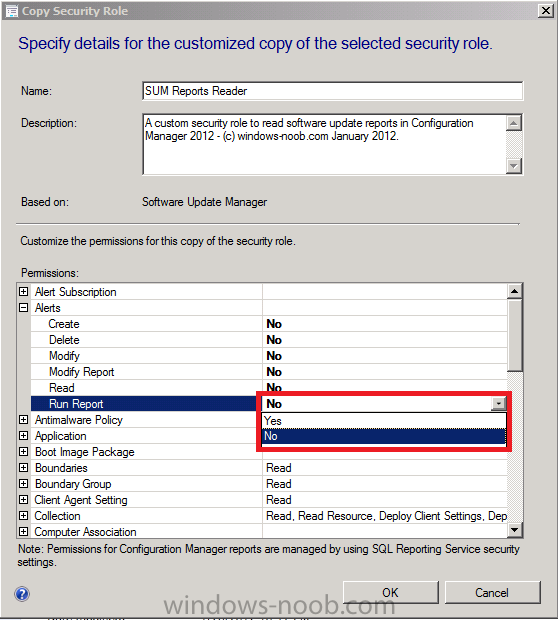 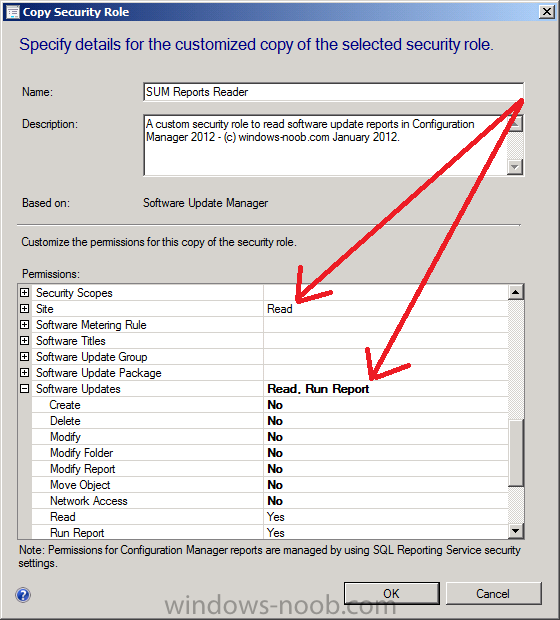 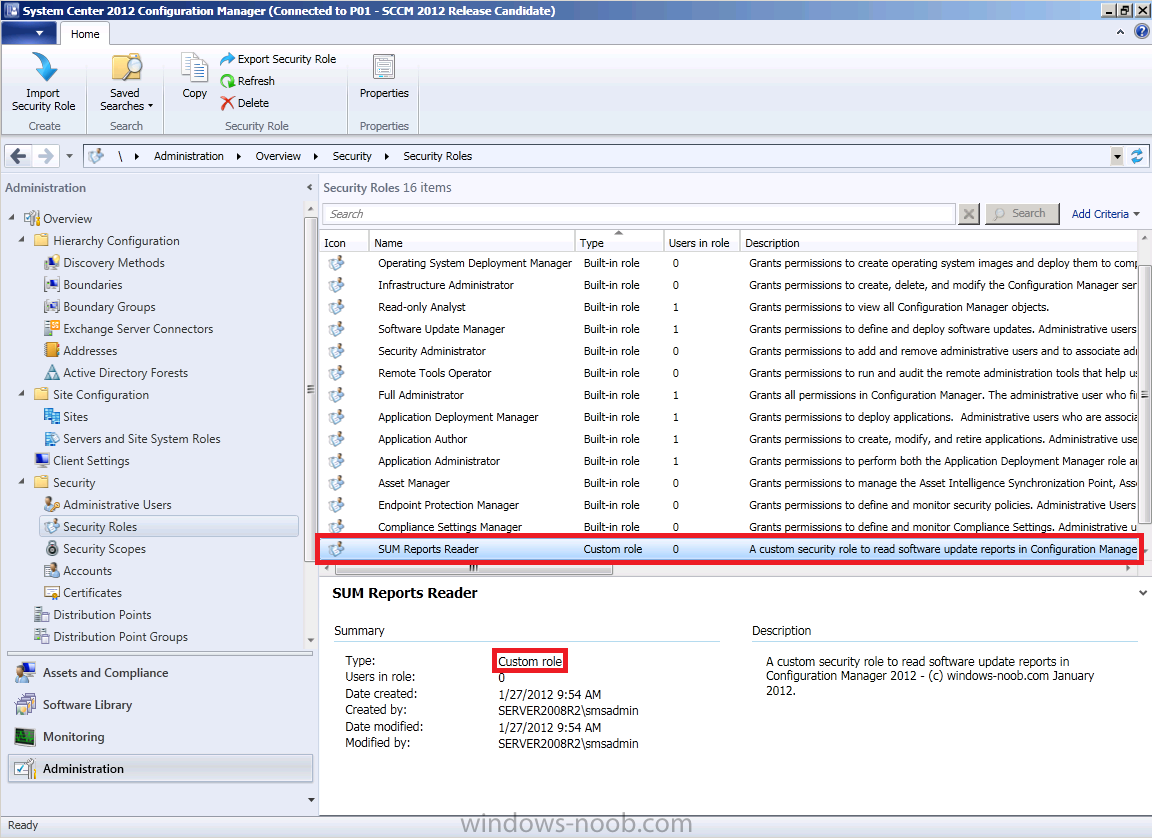 Now that we have created our custom security role, we want to assign users to that role. In Active Directory Users and Computers create a new Global Security Group called Software Updates Management Report Readers as per the screenshot below. 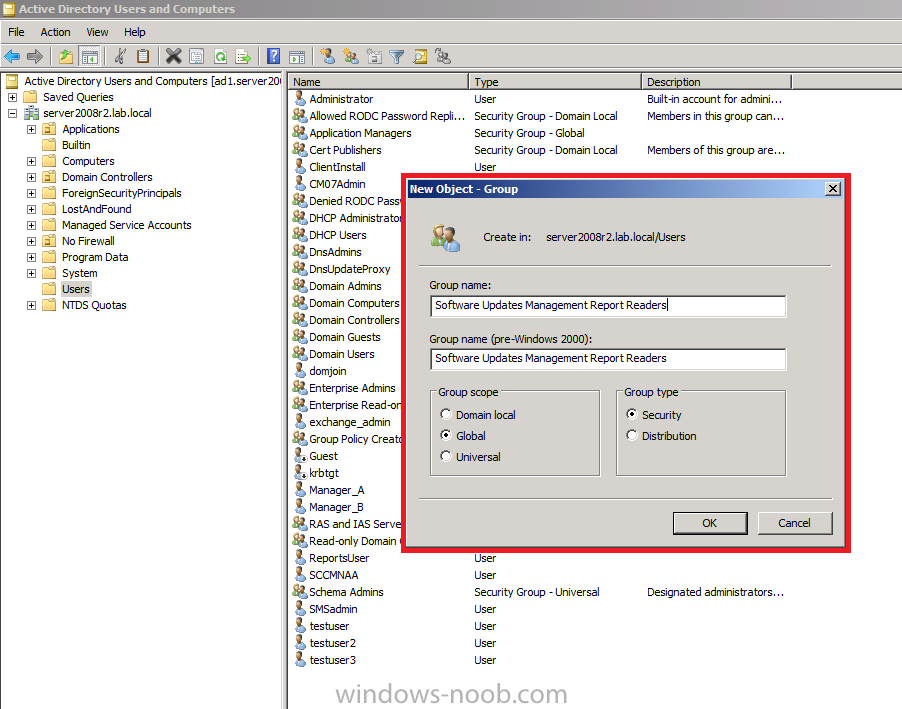 Add some users to that group by selecting those users and right-clicking, choose Add to a Group 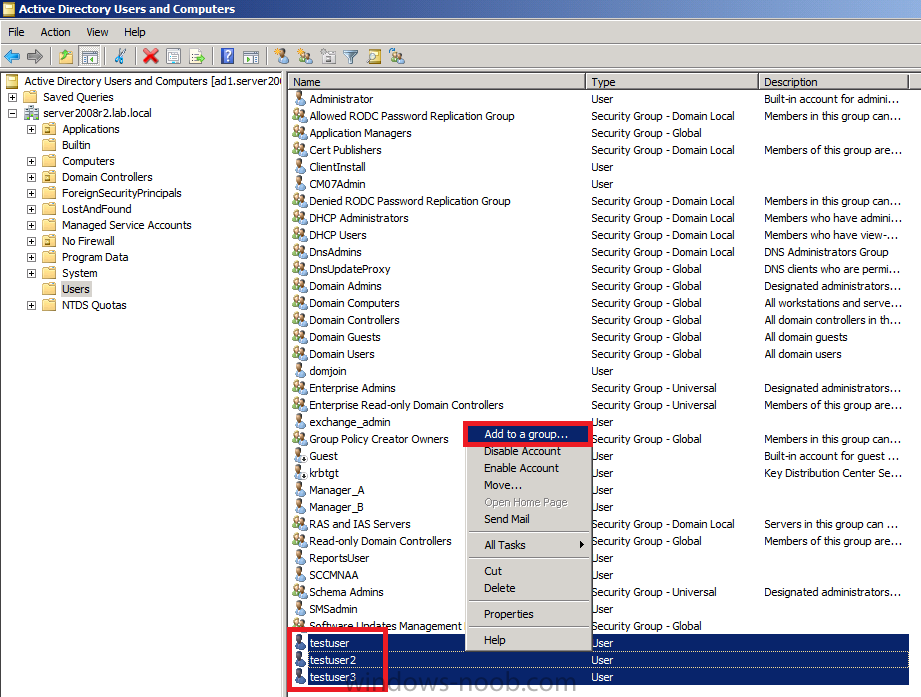 when the Select Groups wizard appears, type in the name of our security group and click on Check Names, click ok when done. 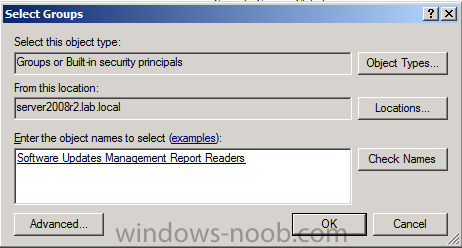 Step 4. Assign the Active Directory Security Group to our custom role
Perform the following on your Configuration Manager 2012 server as SMSadmin. 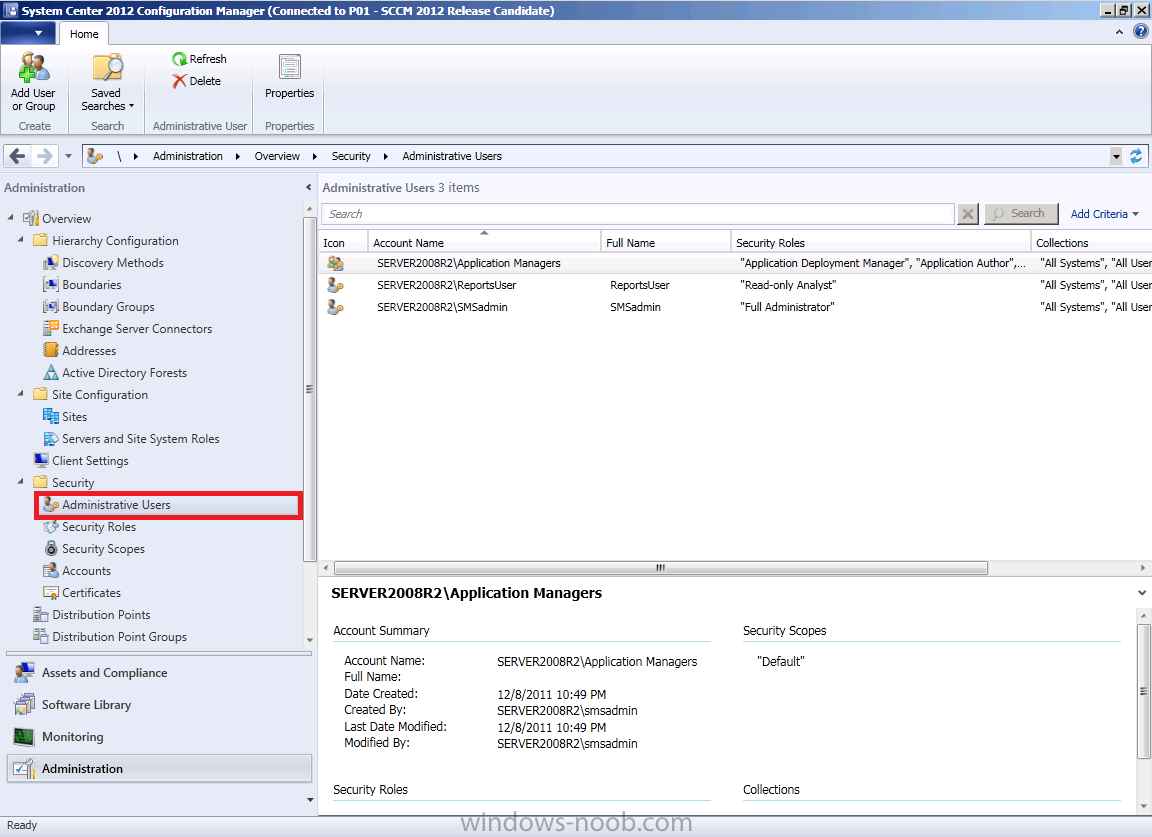 In the ribbon click on Add User or Group 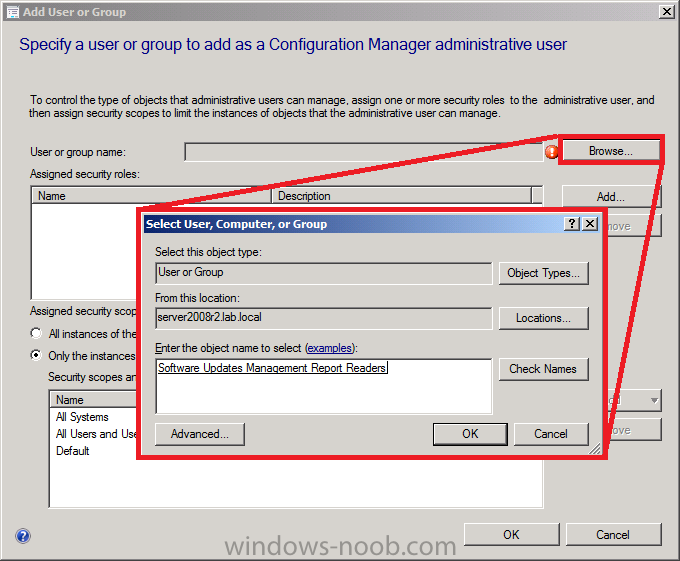 next we need to assign this group with our custom role, so select Add to add security roles, scroll through the list of roles and select our custom role: SUM Reports Reader as per the screenshot below 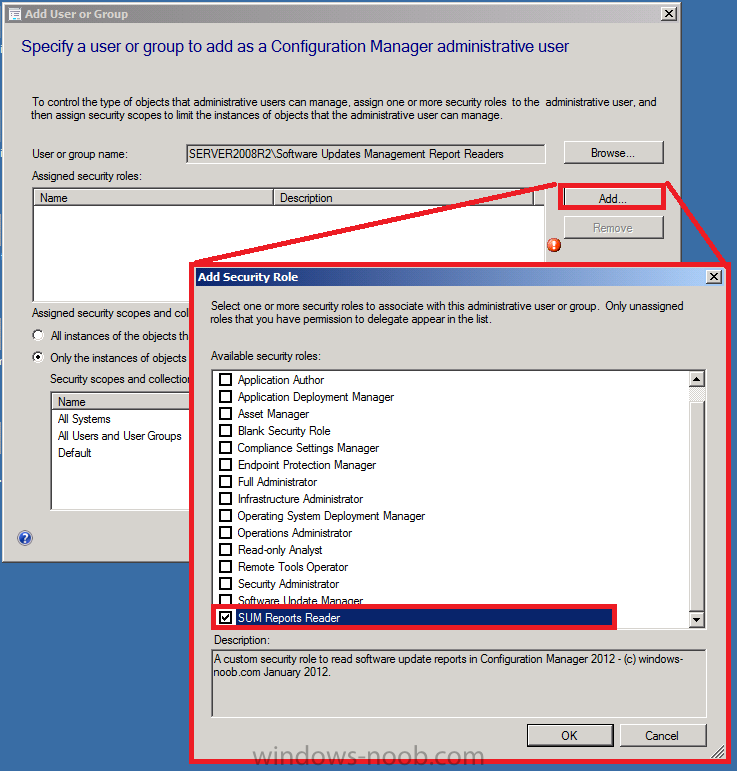 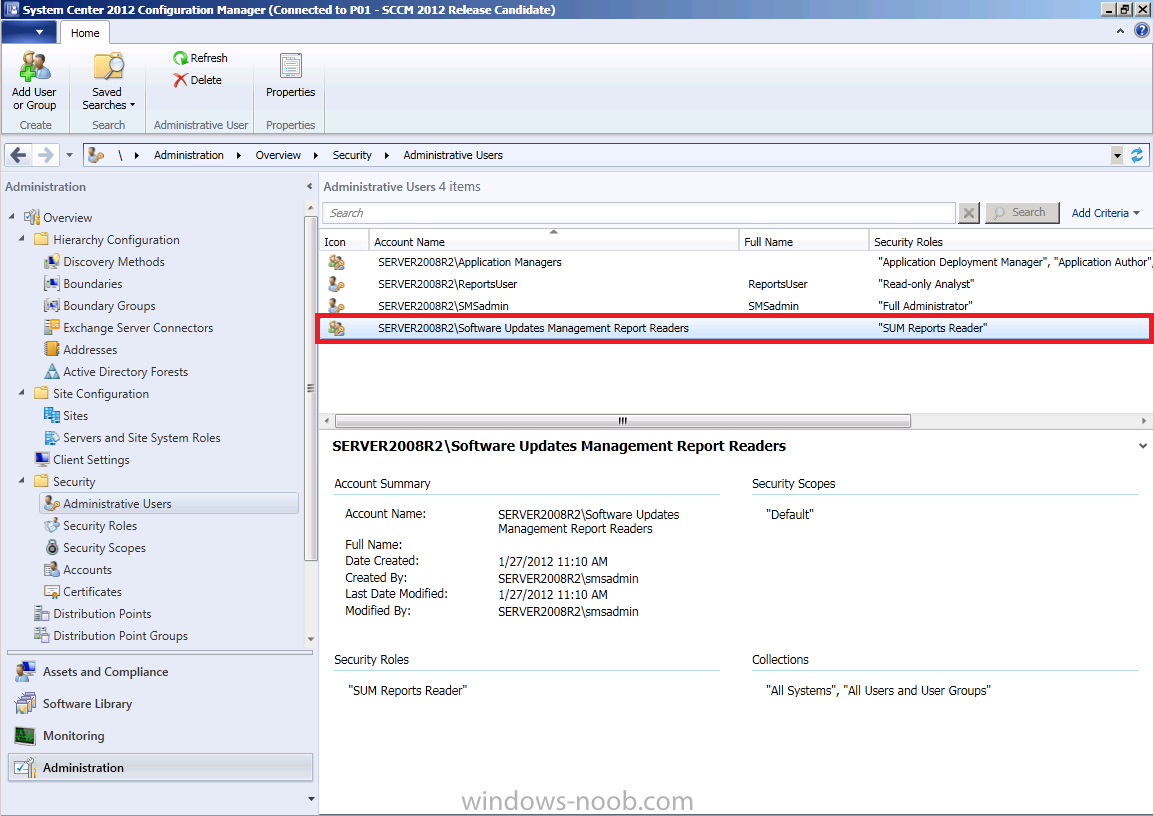 Step 5. Verify the custom role has the permissions we need
Perform
the following on your Configuration Manager 2012 server as a member of
the Software Updates Management Report Readers active directory security
group. 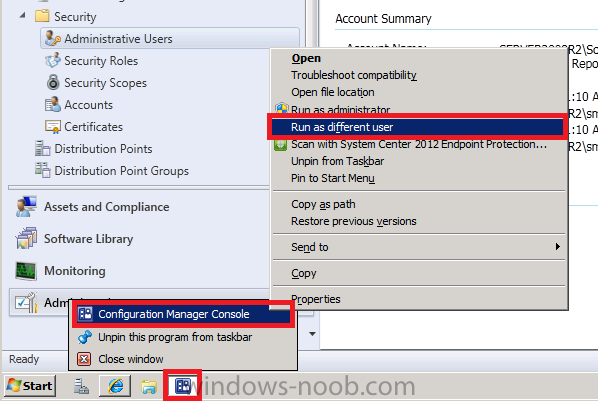 when the security credentials window appears, type in the credentials of a domain user that you have previously added to the Software Updates Management Report Readers active directory security group, click ok when done.

After a while, the Configuration Manager console will appear as it would
if started by that user and you can immediatly see that it looks
different, only the bits that are relevant to this user running Software
Update reports are displayed in the console. 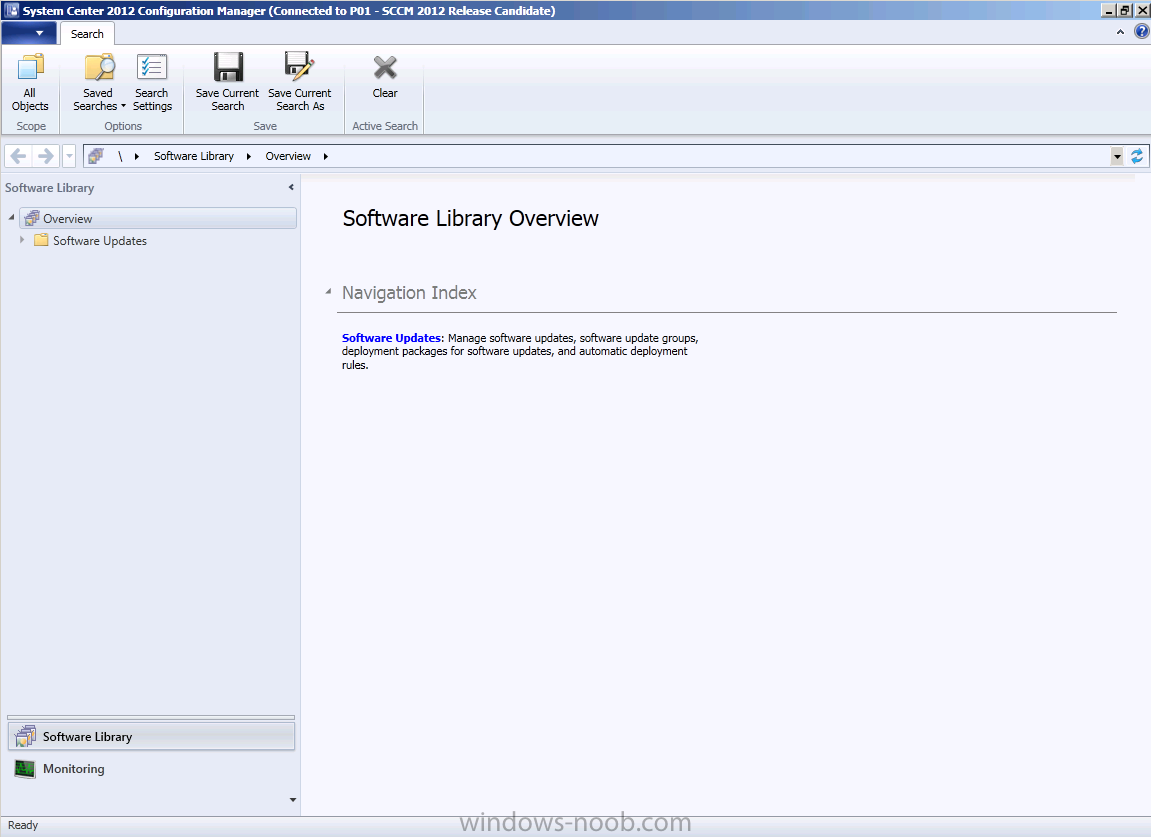 When you add (or remove) permissions from the role, this view will
change however you should close and re-open the console to see the new
view with the credentials of your desired user. We have already defined
our permissions so lets select Monitoring and expand Reporting and then select Reports. Notice how only 48 software update related reports appear (in comparison to the 445 or so reports that a member of the Full Administrator security role would be able to view). 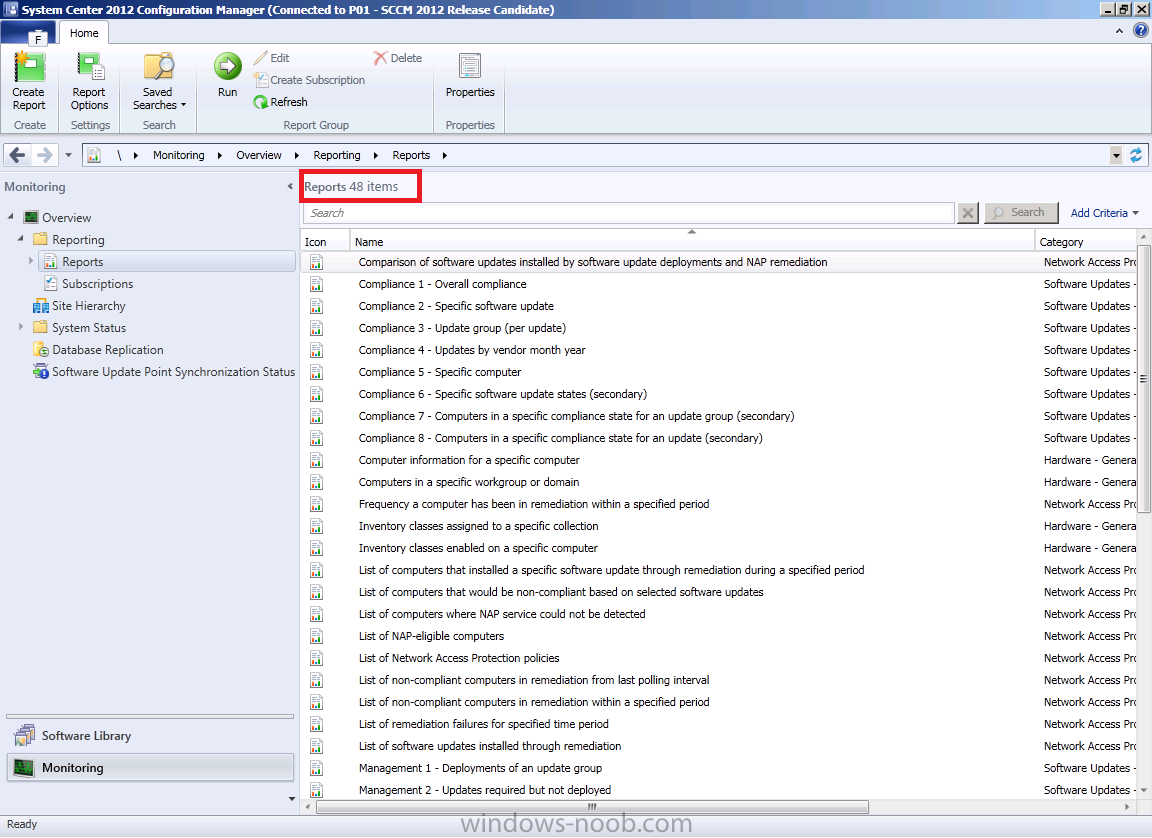 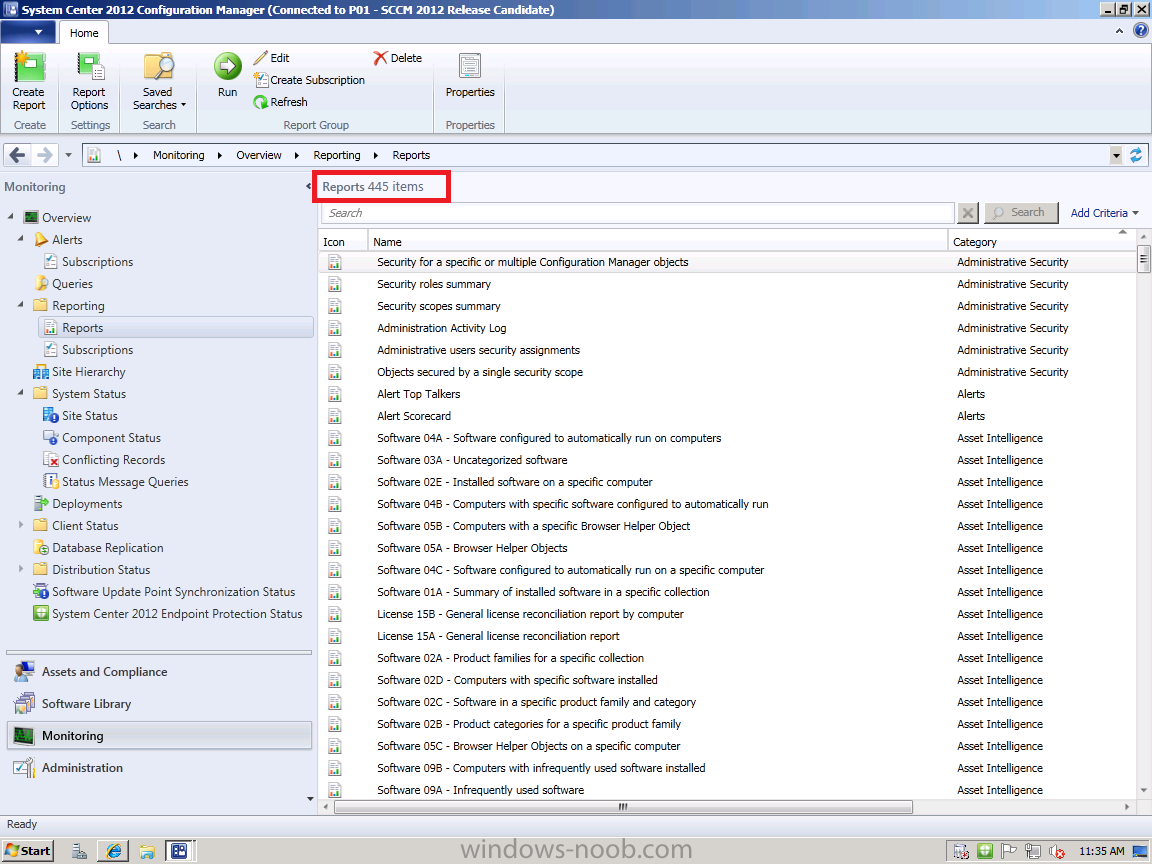 The difference in the number and type of reports available and what you
can do/see in the Configuration Manager console is governed by Role
Based Administration, cool huh ?

This entry was posted in ConfigMgr 2012, Uncategorized. Bookmark the permalink.