Posted on January 27, 2012 by ncbrady
In Part 1 of this series we got our AD and SCCM servers ready, and then we installed System Center 2012 Configuration Manager as a standalone Primary site. In Part 2 we configured the SCCM server further by adding some Windows Server roles necessary for the following Configuration Manager 2012 functionality, Software Update Point (SUP) and Operating System Deployment. In Part 3 we configured the server further by Enabling Discovery methods and creating Boundary’s and Boundary Groups. In Part 4 we configured Client Settings, Added roles and Distributed the Configmgr Client to our Computers within the LAB, then in Part 5 we enabled the Endpoint Protection Role and configured Endpoint Protection settings and targeted a collection called All Windows 7 Computers with these settings and policies.

In Part 12 we demonstrated a new feature in ConfigMgr which allows us to Patch operating system WIM images using Offline Servicing. This means that you can apply Windows Updates by using Component-Based Servicing (CBS) to update the your previously captured WIM images. In Part 13 we looked at how Role Based Administration is used within ConfigMgr and we created a new custom role
to allow a user (or users within a Security Group) to view Software
Update Reports. This is useful because you will probably want one team
to take care of configuring and deploying software updates, and to grant
another (Management etc) the capability of reviewing Compliance
Reports.

Now we will perform a side-by-side migration from Configuration Manager 2007.

For recommended reading about migrating to Configuration Manager 2012
and best practise advice, please refer to the following links from
Technet:-

Some key points about migration. 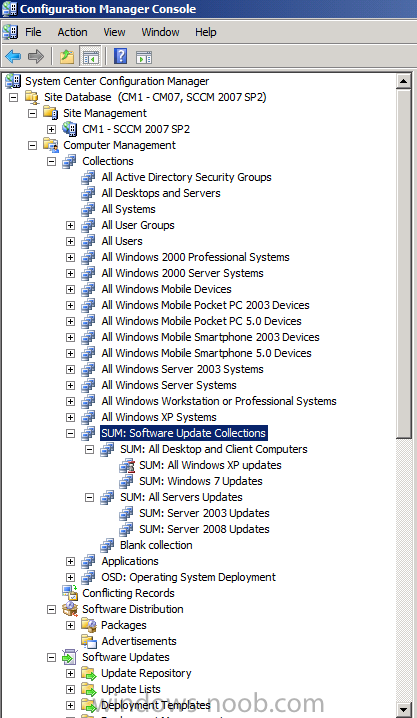 In the Administration workspace, expand Overview and select Migration, as we havn’t migrated anything yet it’s going to look pretty bland. 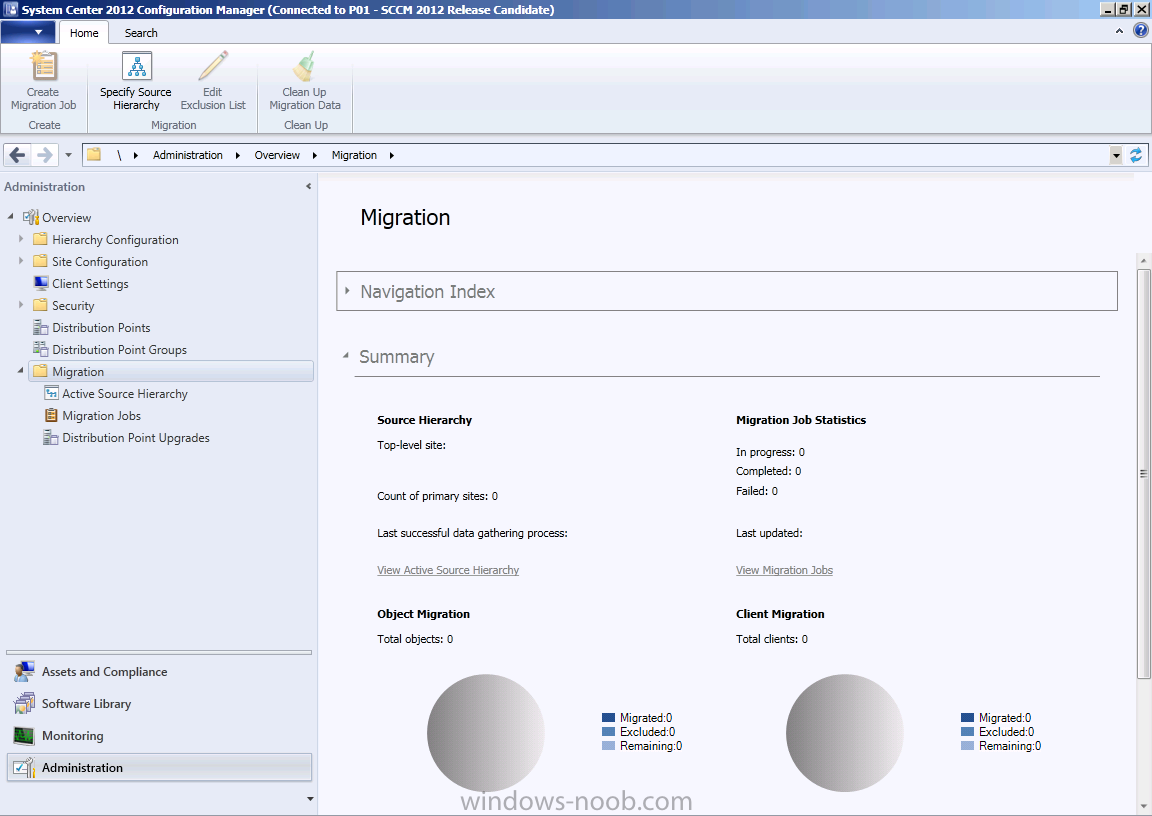 We need to specify the source hierarchy in order to establish a
connection between the source (CM07) and destination (CM12) servers, so
click on Specify Source Hierarchy in the ribbon. 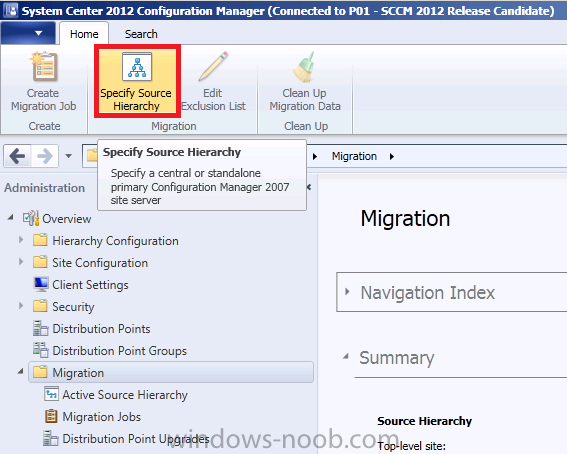 when the wizard appears we need to specify the Top-Level Configuration Manager 2007 site server. So fill in those details. 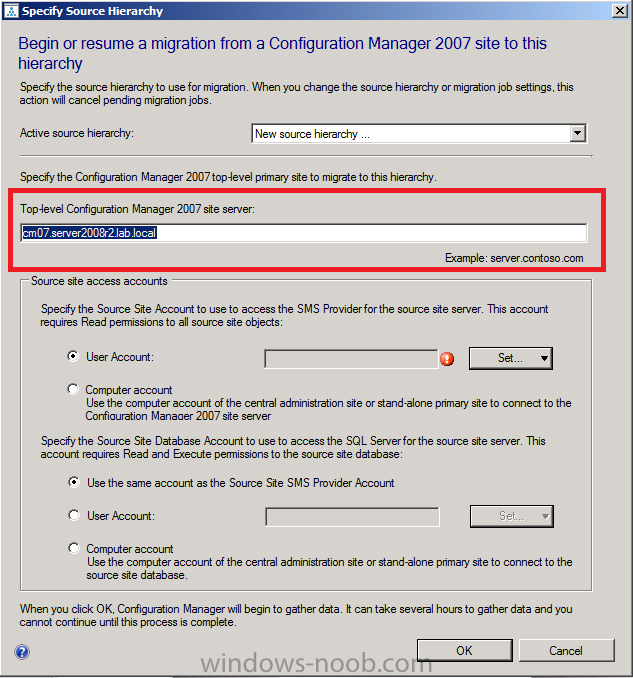 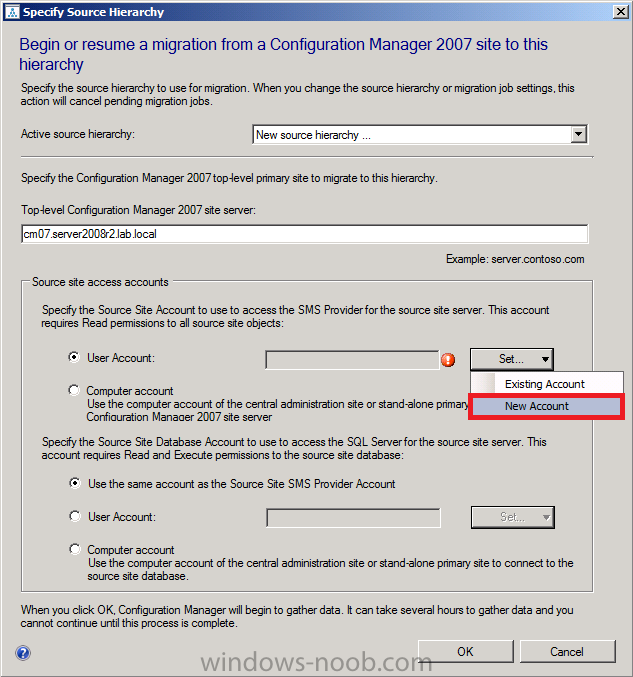 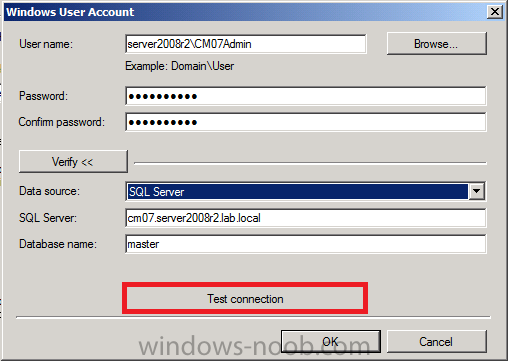 make sure you see a successful connection before proceeding. 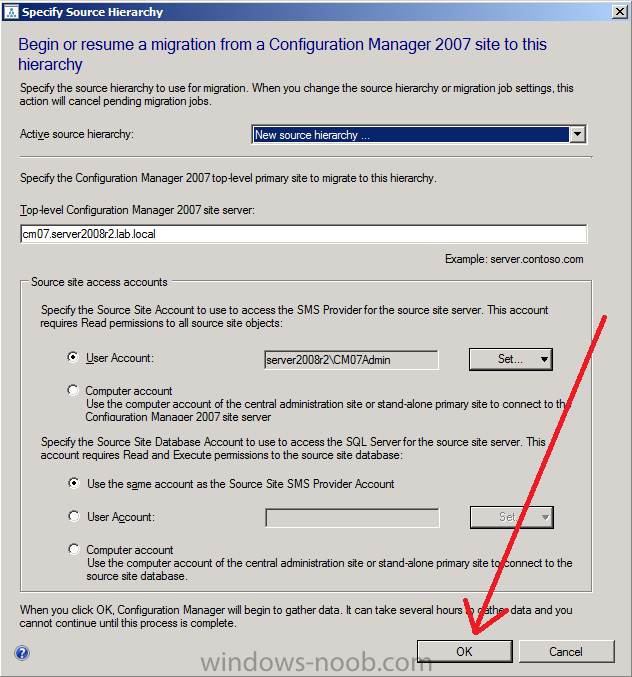 a few minutes later and it’s done, close that window.

at this point we can now see that our migration summary window has populated with some information. 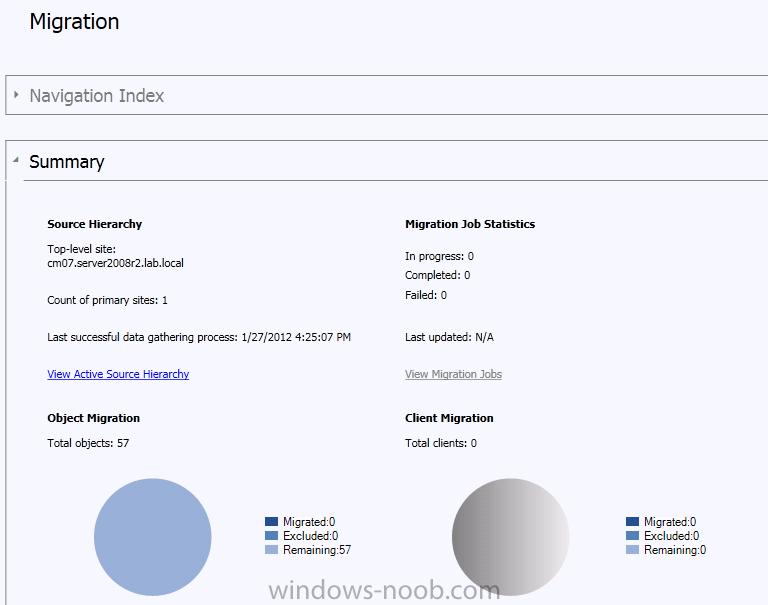 Note: You can start and
stop the data gathering process by using the Gather Data Now, and Stop
Gathering Data actions in the Configuration Manager console.

Step 2. Create a migration job
Perform the following on your Configuration Manager 2012 server as SMSadmin.

When the Migration Job wizard appears give it a name that is descriptive of what we are planning on migrating. Notice that in the drop down menu for Job Type we have three choices

In this case we are going to migrate collections, so we will name this migration job as follows:- Migrate Software Update Management Collections 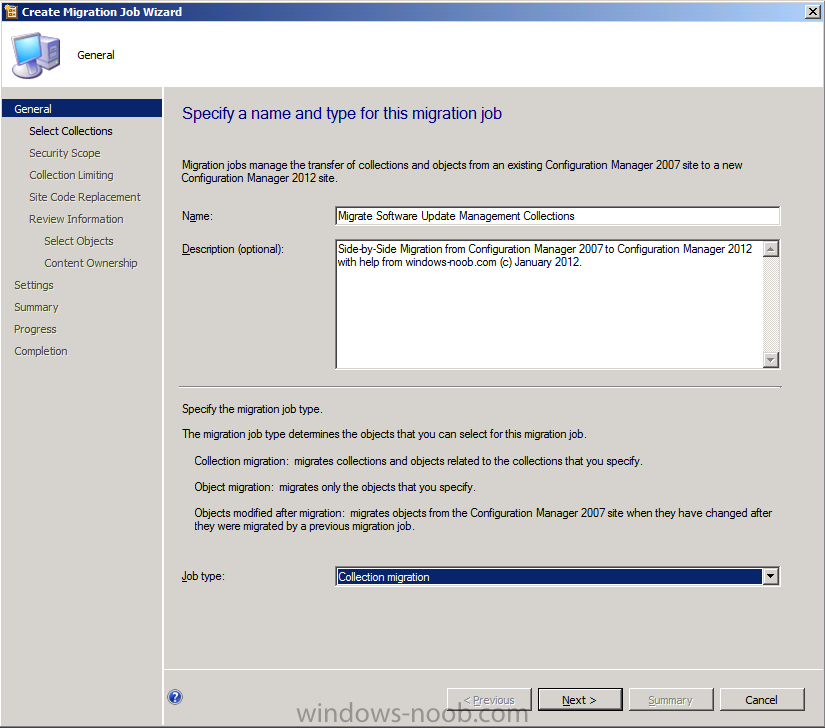 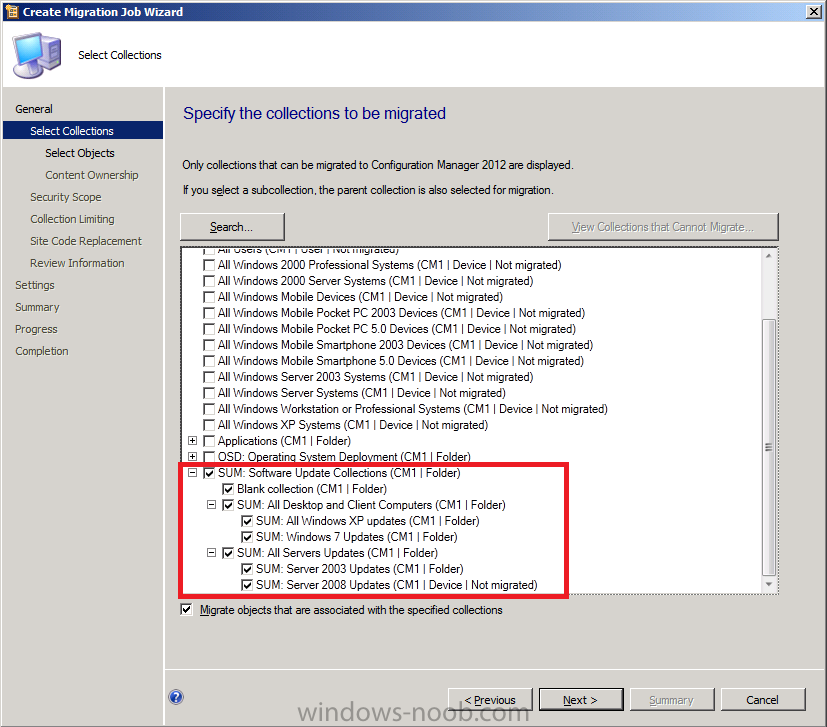 next we get to select objects that we want to migrate. Look through what
is highlighted and decide if you really want to migrate it or not, this
is a LAB so we’ll let everything stay selected. 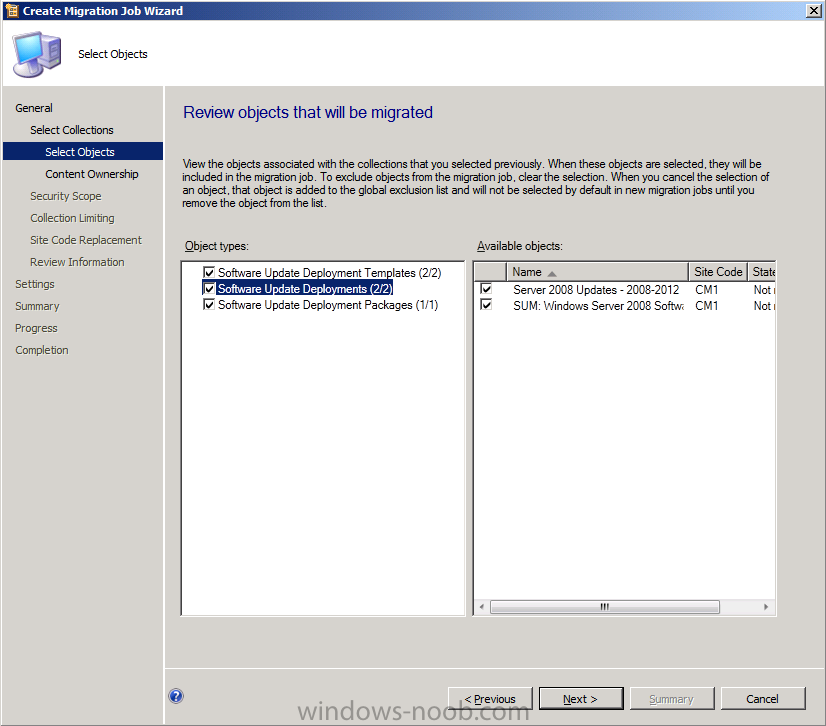 for Content ownership, specify which site
in your Configuration Manager 2012 hierarchy will be the designated
owner of the content, in our LAB we have standalone primaries so just
click next. 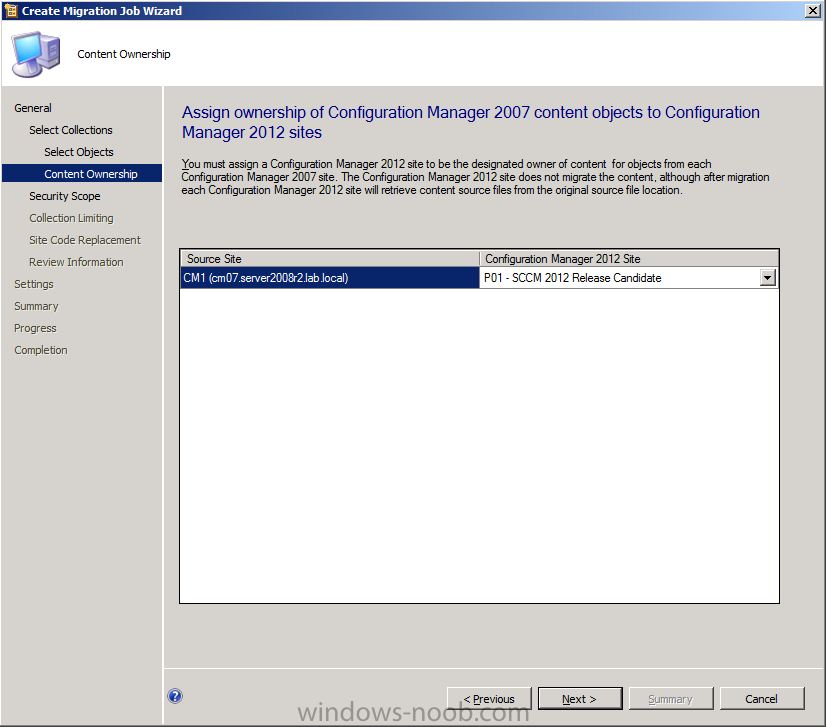 next you can specify the Security Scope to be applied to the migrated objects, select the Default option. (I will return to Security Scopes in a separate Part). 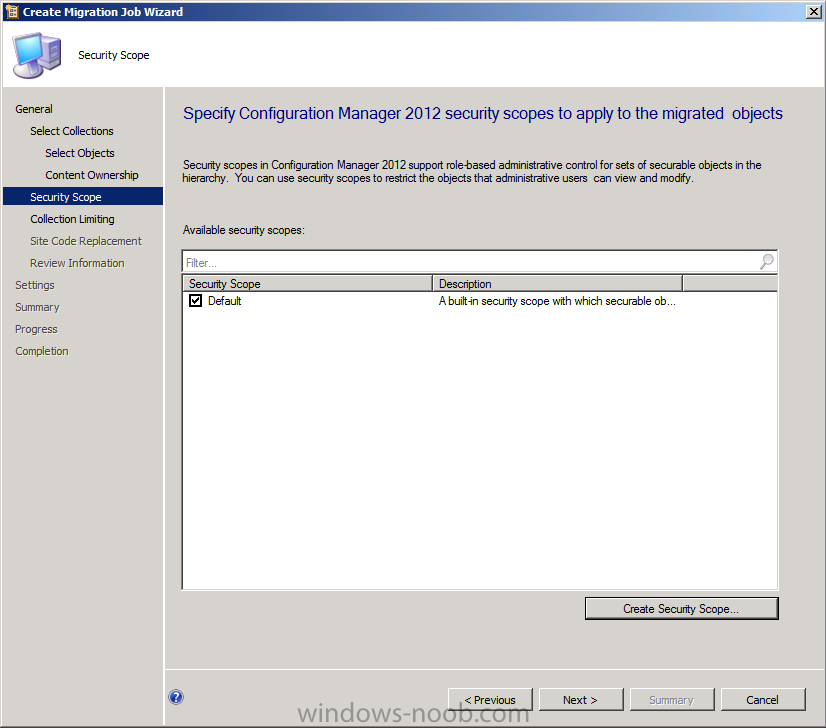 if any collections need to be limited to All Systems or All Users then they’ll appear here, we are ok so lets proceed. 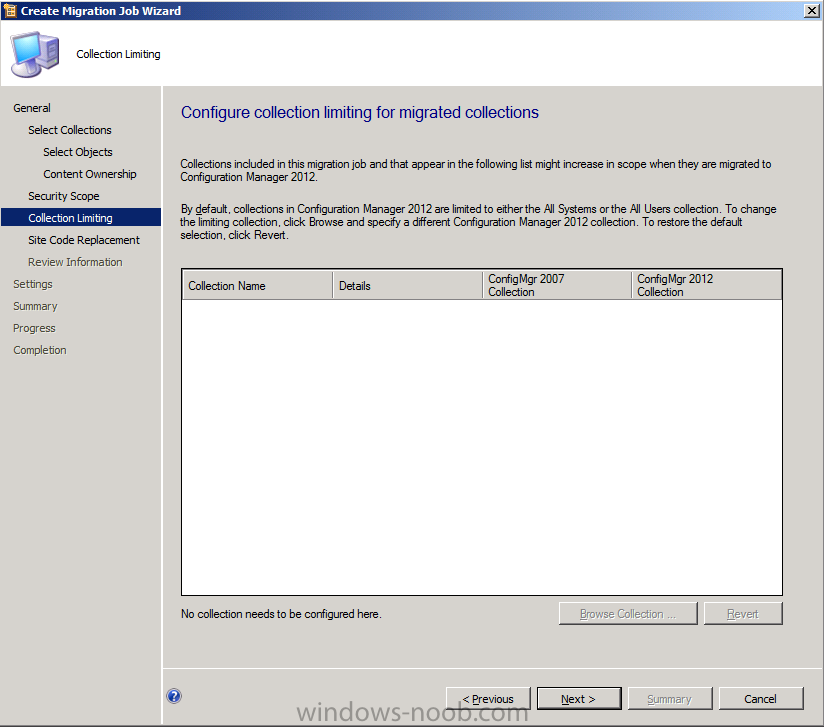 On the Site Code Replacement screen you may
see collections that are based on Queries that are limited to Site
codes, we don’t have any in this LAB so nothing appears, but if you have
any queries like this in your LAB then you’ll see those collections
listed here. What it’s telling you is that you’ll have to edit the
queries to point to the new site code. 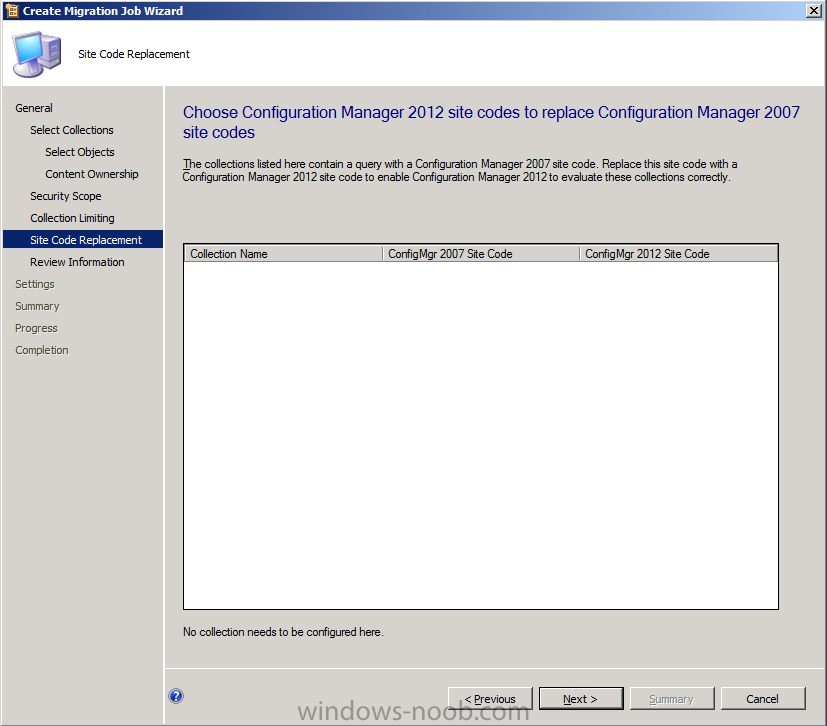 and now you get to review the information, you can save it to a file (recommended) which is a plain text file that lists things that you should be aware of. Save the file, read it. Action it. 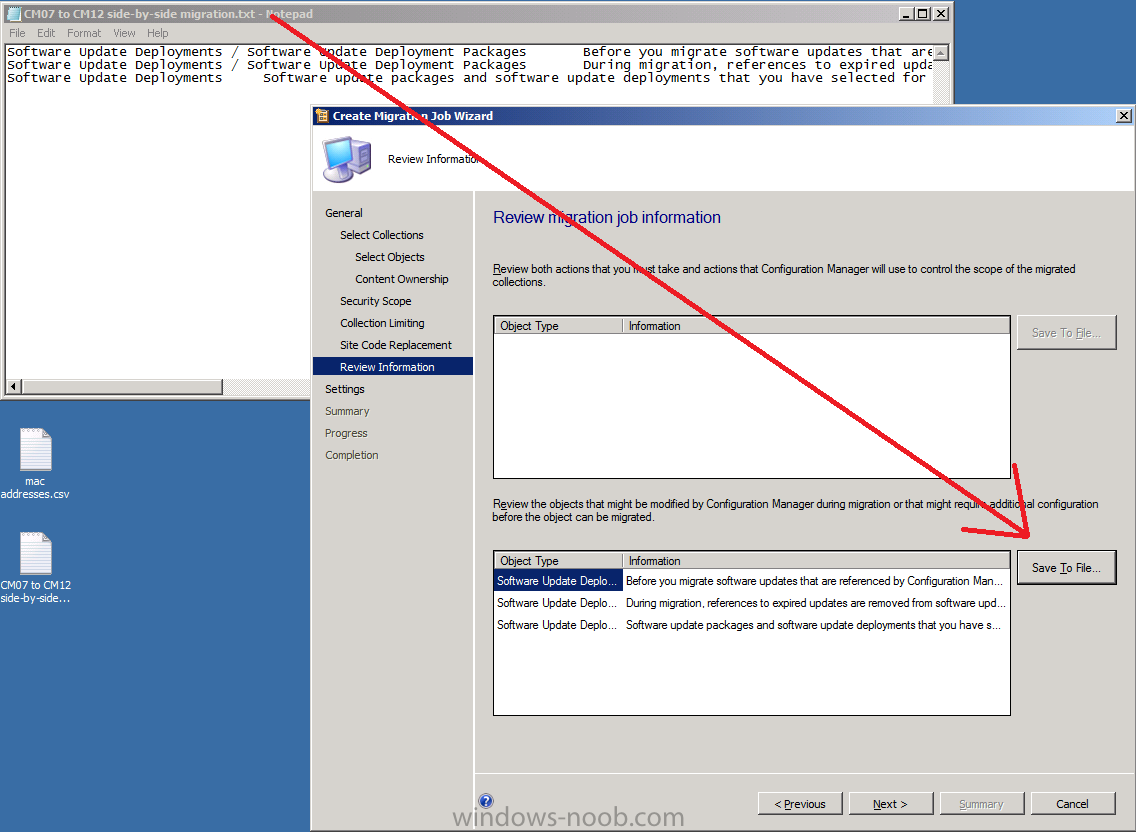 Next you can decide to run the migration job now (default) or schedule
it until later. We want to migrate now so let’s do that. Note that we don’t want
any new deployments being enabled after an advertisement is migrated so
verify that setting is not selected (by default it is not selected).
This will mean that you have to manually enable the deployments in
Configuration Manager 2012, but that’s ok isn’t it. 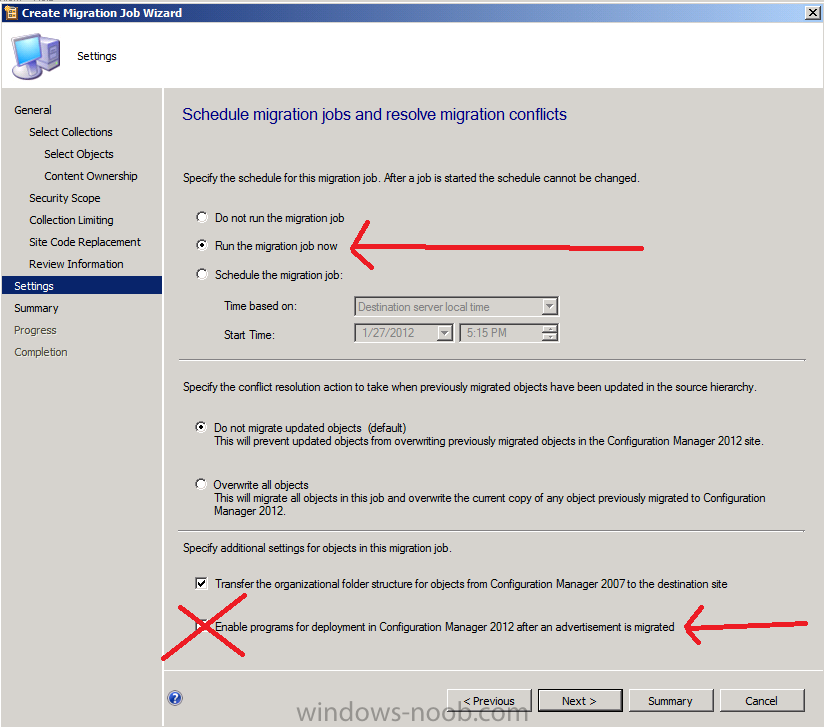 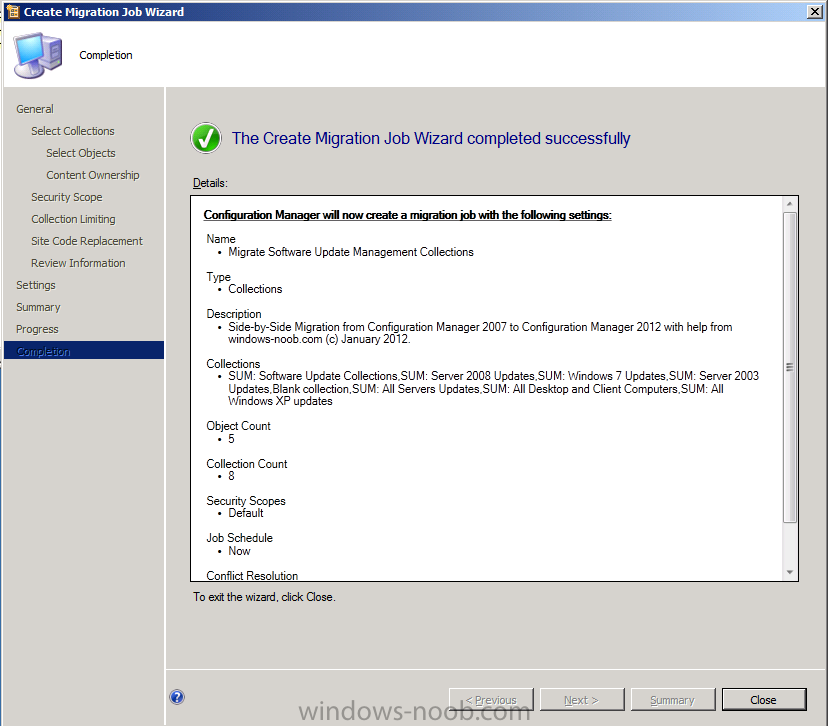 Step 3. Monitor your migration job and resolve issues found.
Perform the following on your Configuration Manager 2012 server as SMSadmin.

In the console click on Migration Jobs and you’ll see the status of our newly created migration job, in the screenshot below it is still running. 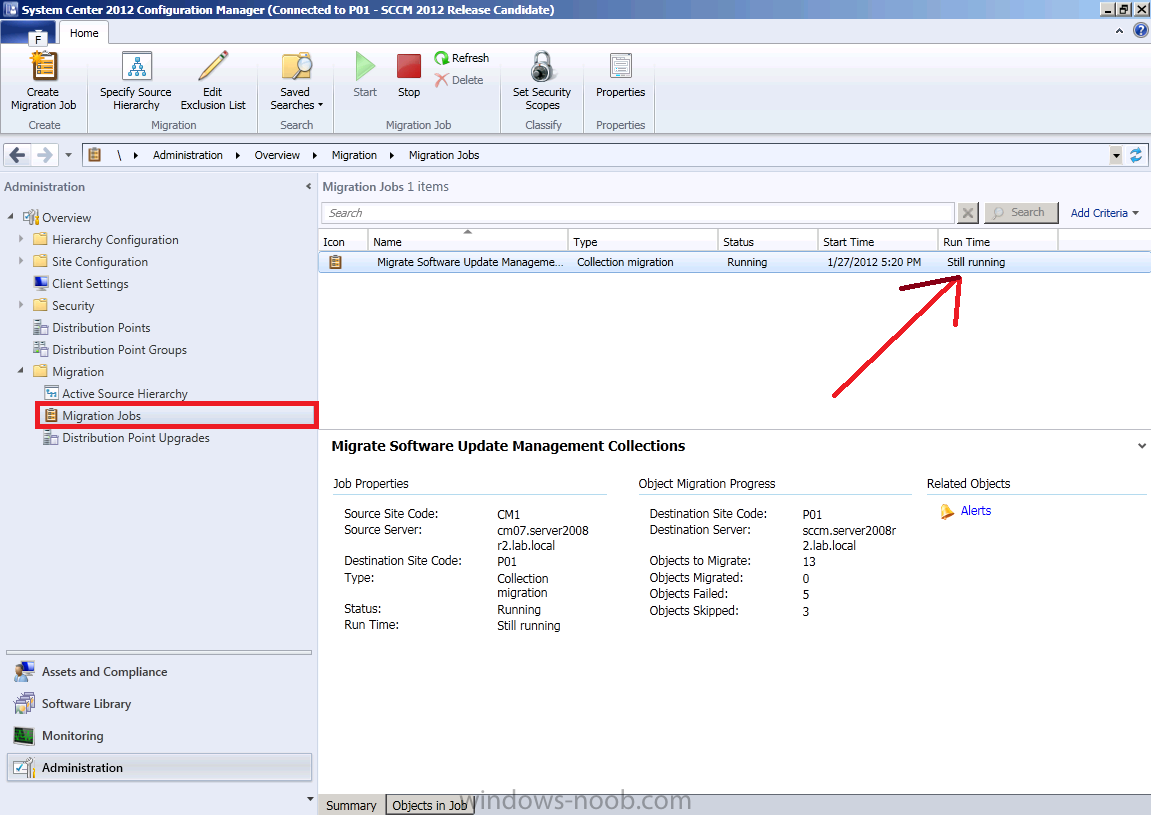 After a while it should complete, note that the status in our LAB says Failed. Before we find out why, let’s review the information that the job shows us in the summary,
in particular let’s review the Object Migration Progress. We can see
that it has migrated 2 objects, 7 failed and 3 were skipped. 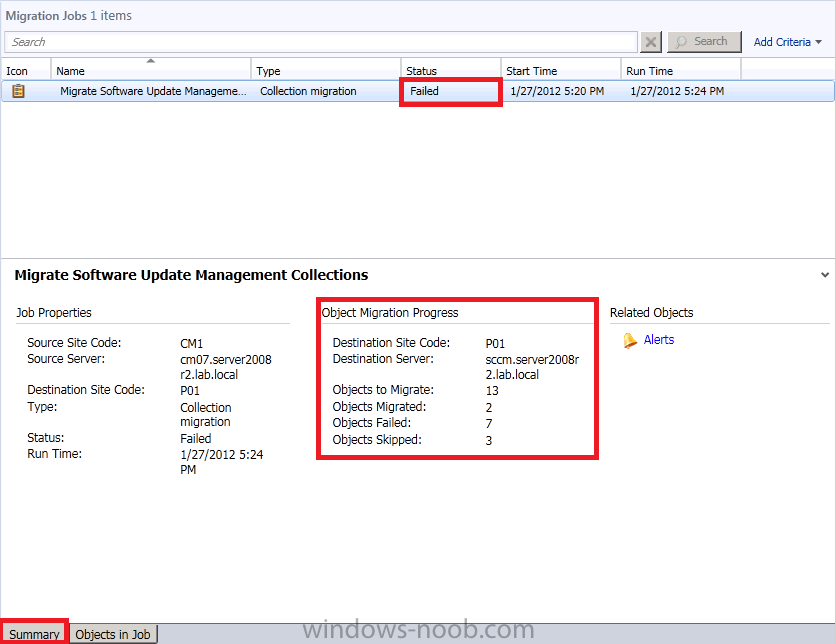 Click on the Objects in Job tab to get specific information about the status of migration. 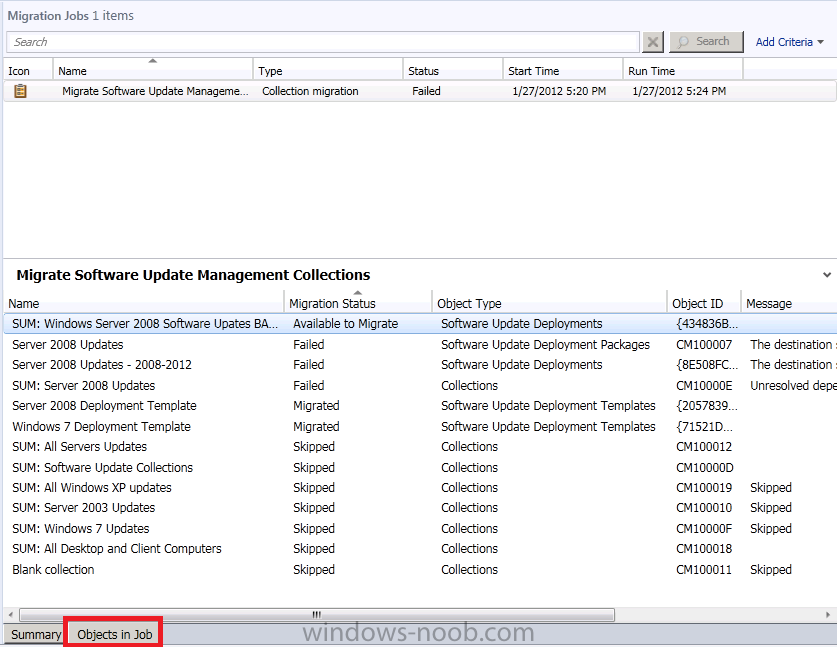 The objects that are skipped are empty collections
(empty collections are NOT migrated). The failed objects are more
interesting and you can select each object that has failed and read its
corresponding message (by scrolling to the right) to find out what you need to do to fix it.

for example, the following message appears on one of the objects:-

Great, now we know what’s wrong and how to fix it.

The message in this example is telling us that the products synched are
not matching on the destination (it doesn’t understand how to deal with
them) so let’s verify how our Products are configured on both sites, CM07 on the left, CM12 on the right, see the difference ? 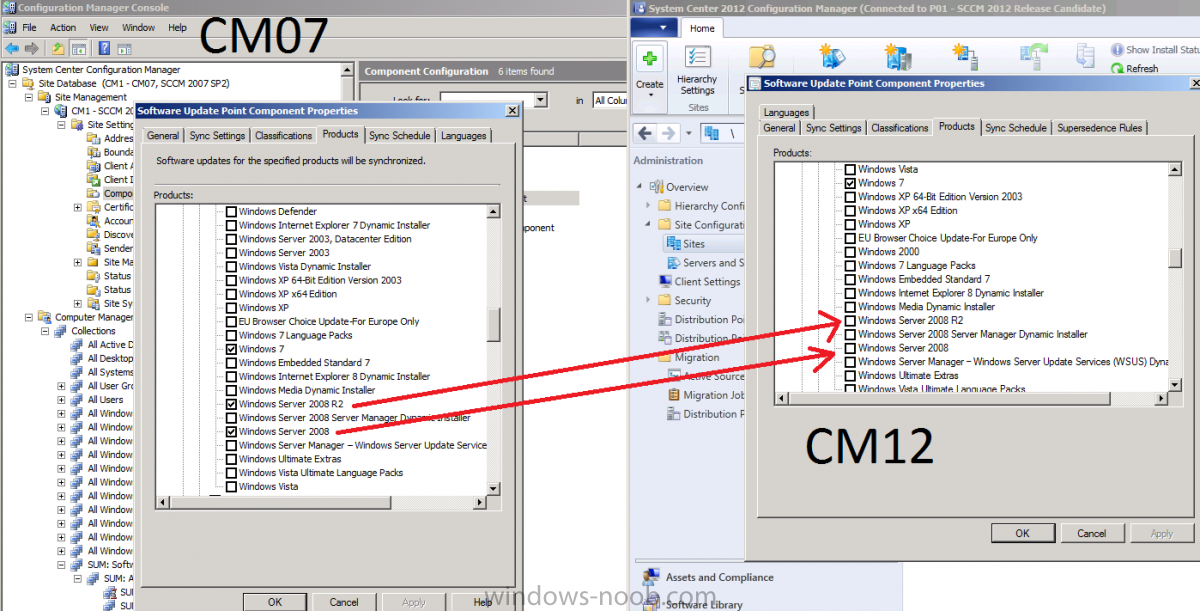 They should both be identical prior to running the Migration Job, this is an important lesson for you 🙂

So correct the problem, do a Software update sync on CM12 and run your migration job again. Repeat this process for each failed message
until all messages have been actioned upon. Note that you will most
likely have to go and Gather Data again particularly if the
logs/messages tell you to do so. But once you’ve resolved the problems
your migration should complete as per the screenshot below. 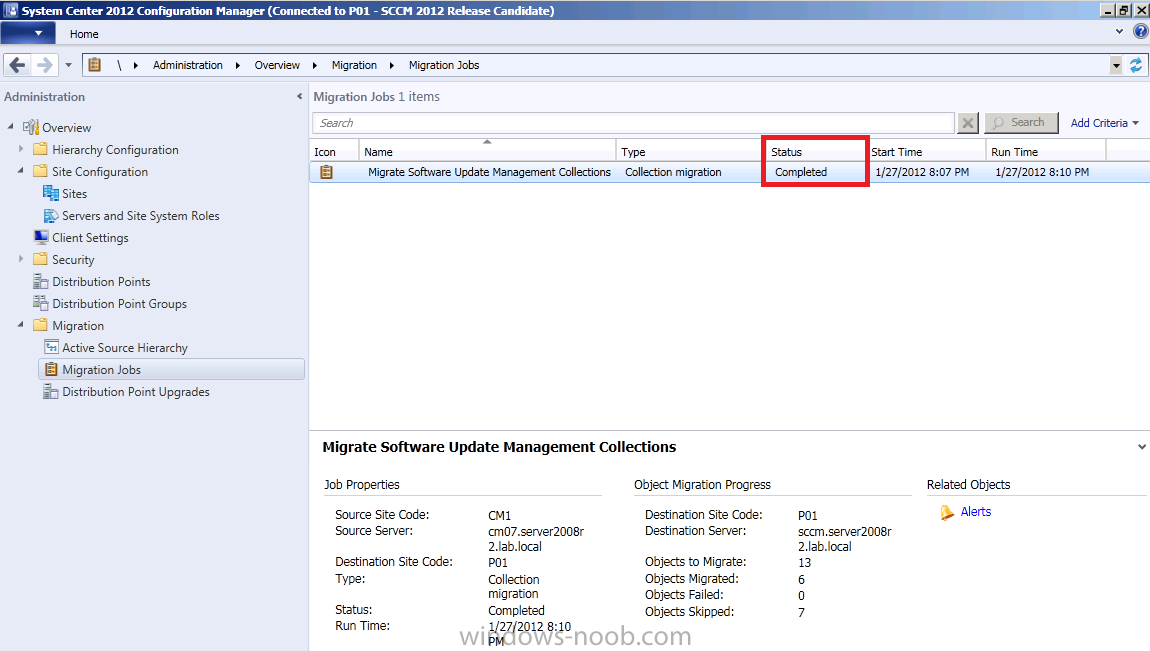 and here’s what did get migrated, I may go into further details about
migrations in a later post, notice the migrated Advertisments become
Deployments. 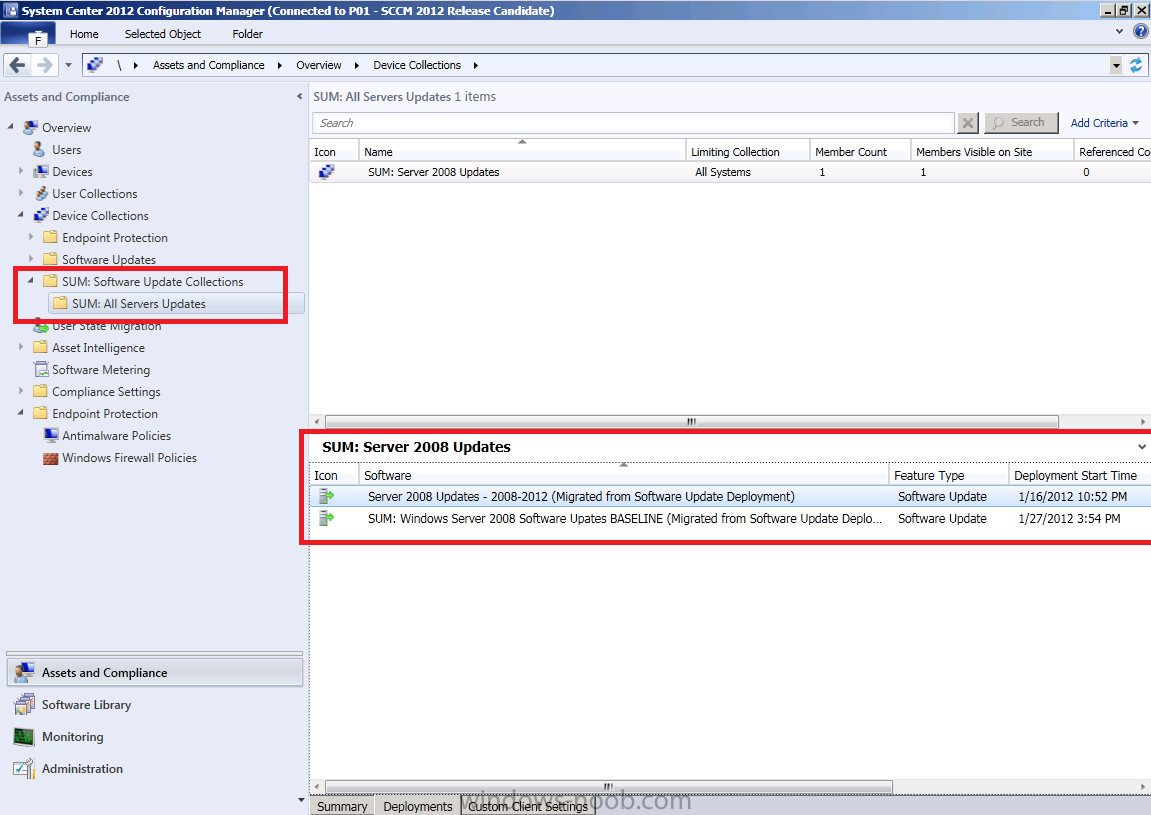 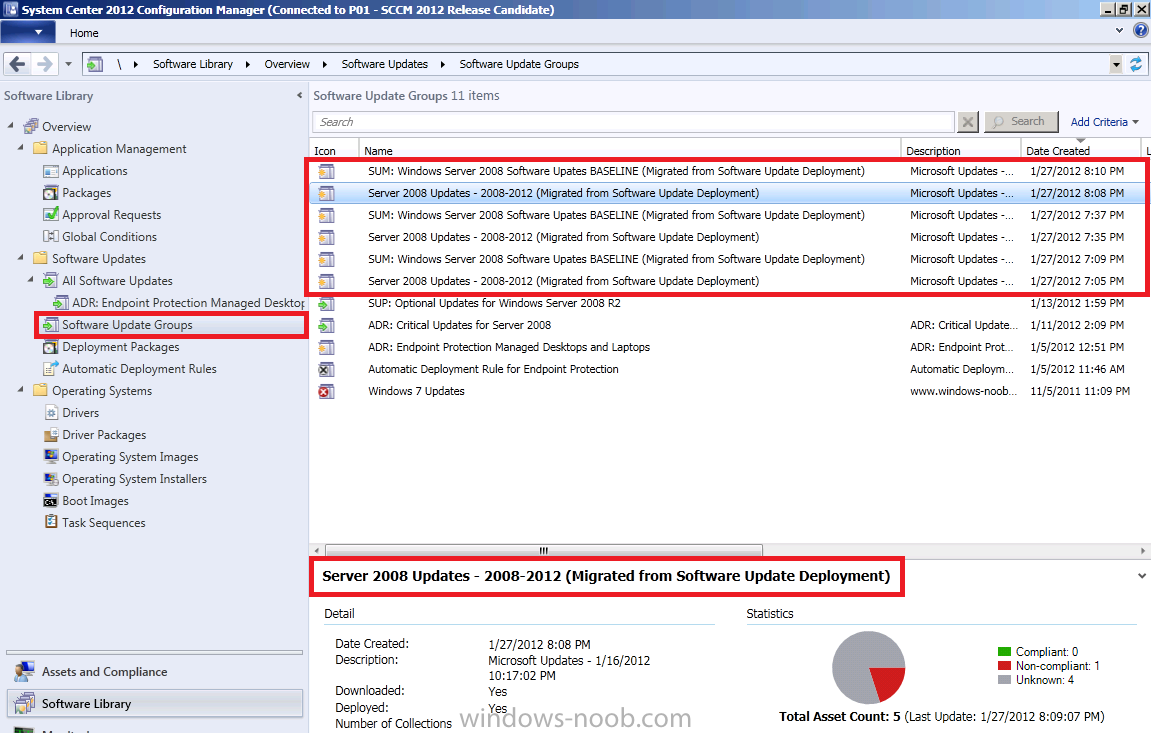 don’t forget to enable any Deployments that you want enabled

Finally, you can review the Migration Summary
screen to get an overview of your total Migration Progress (you’ll need
to create more migration jobs to get the other objects if you want them 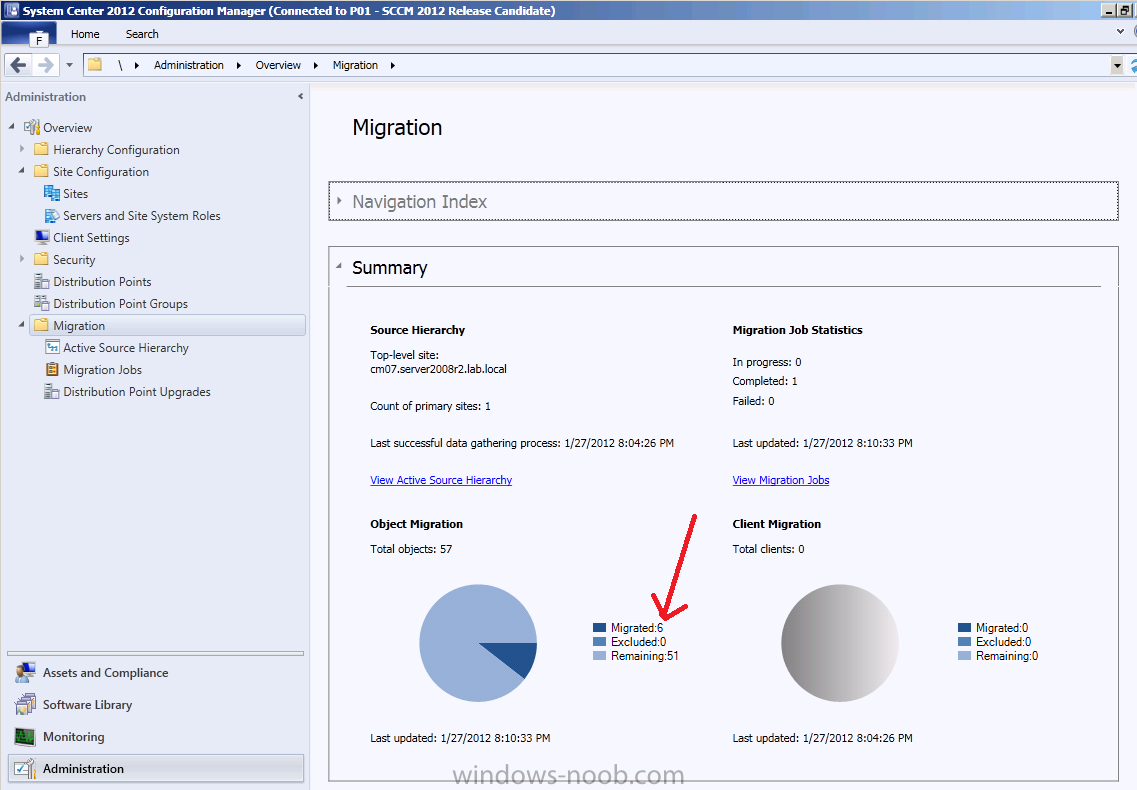 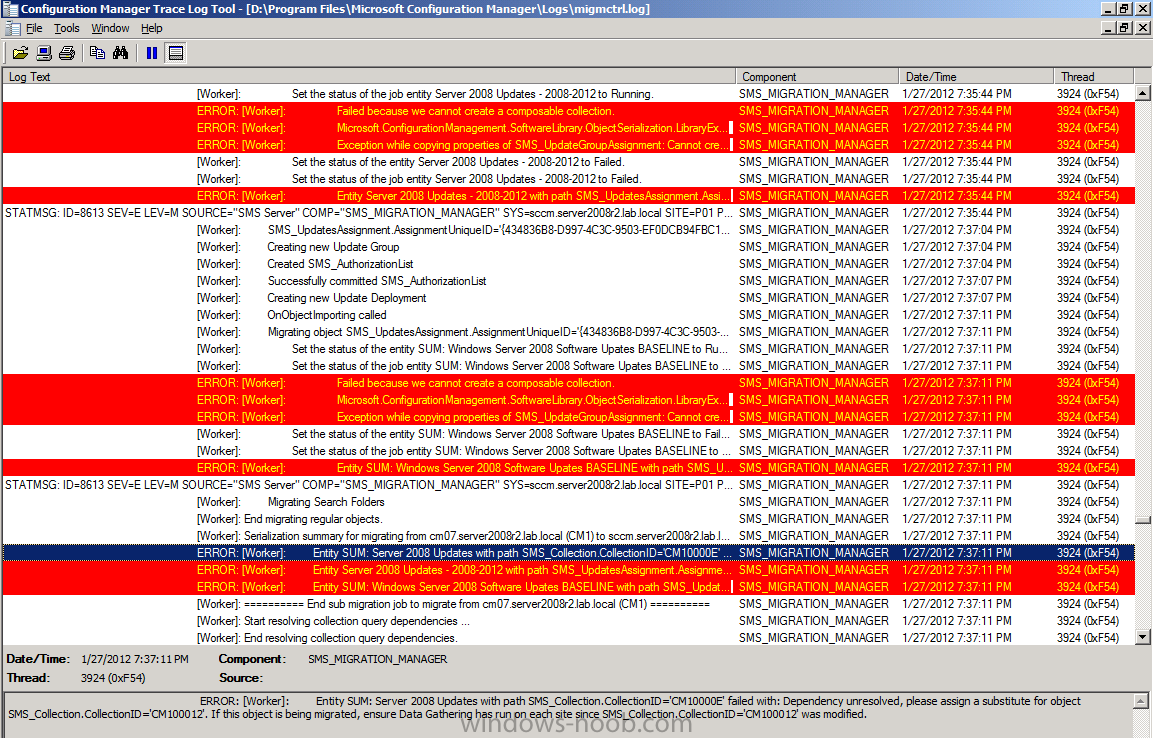 The original post is here on windows-noob.com.
This entry was posted in ConfigMgr 2012, Uncategorized. Bookmark the permalink.