Microsoft have been hard at work developing the next release of Configuration Manager, and you can test the 4th iteration of it now, called System Center Configuration Manager and Endpoint Protection Technical Preview 4. This post will guide you through installing it from scratch using some automation via scripts.

New features in this technical preview include:

Note that this evaluation is limited as described below:

In this guide I assume you have already installed two servers running Server 2012 R2 as listed below, I also assume you have some knowledge of PowerShell, if you don’t, start learning it now !

* CM01 the Configuration Manager server, joined to the domain.

Make sure you have a copy of SQL Server 2014 ready to install as that is the version used in this guide.

To allow SQL to replicate data, open the following TCP ports in the Configuration Manager firewall, 1433, 4022. You can do this by targetting  your ConfigMgr servers with a GPO. To create the GPO do as follows. Start the Group Policy Management tool (GPMC.MSC) and create a new GPO. 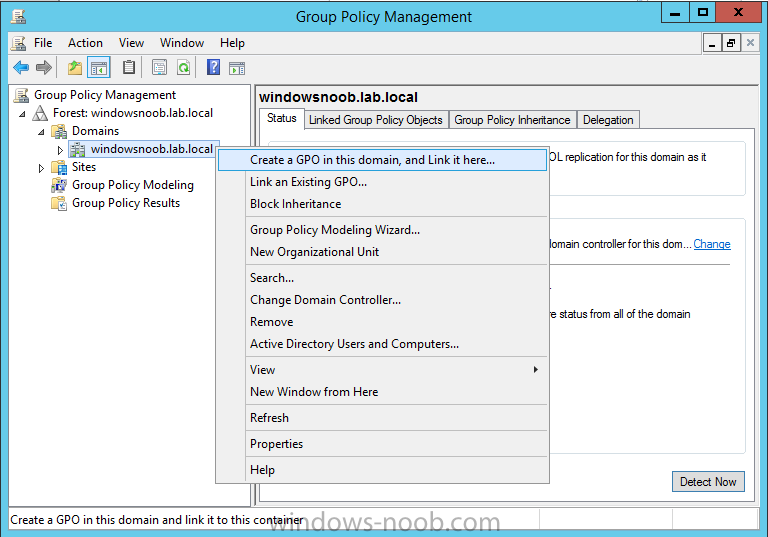 Give the GPO a name such as SQL Ports for System Center Configuration Manager.

When done, right click on the GPO and choose Edit. 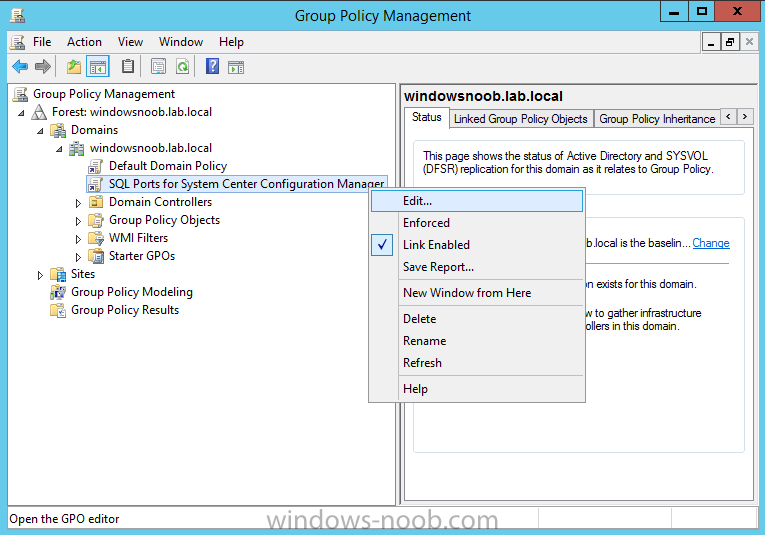 Select Computer Configuration, Policies, Windows Settings, Security Settings, Windows Firewall with Advanced Security and select Inbound Rules, choose New Rule and follow the wizard for opening up TCP port 1433 as per this guide on Technet. Once done, repeat the above for TCP Port 4022. 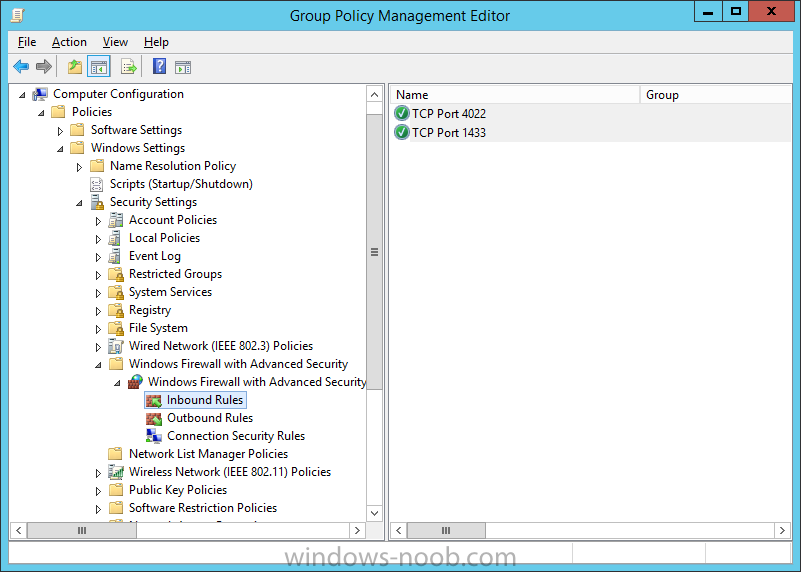 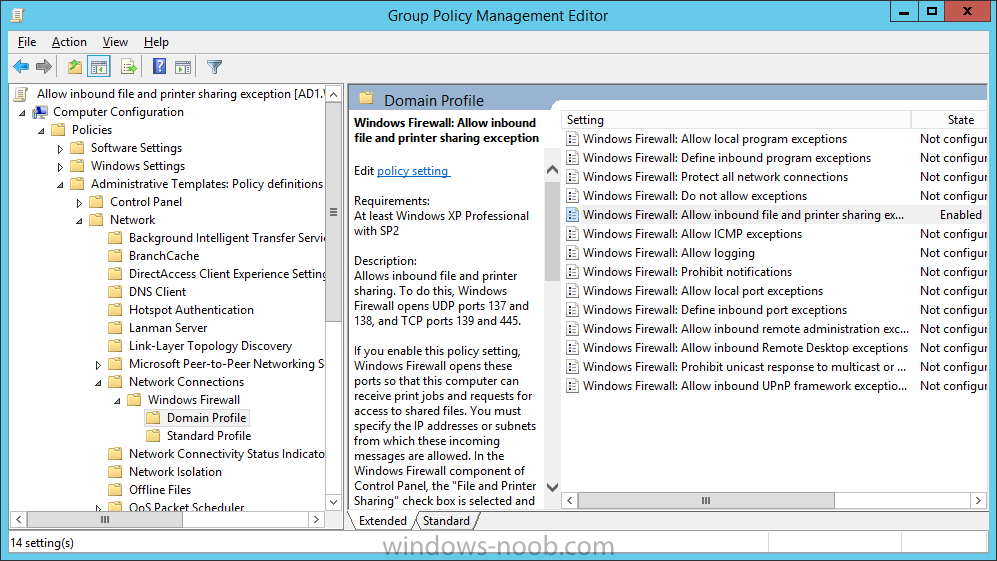 Once done, apply the GPO’s by running gpupdate /force on CM01. 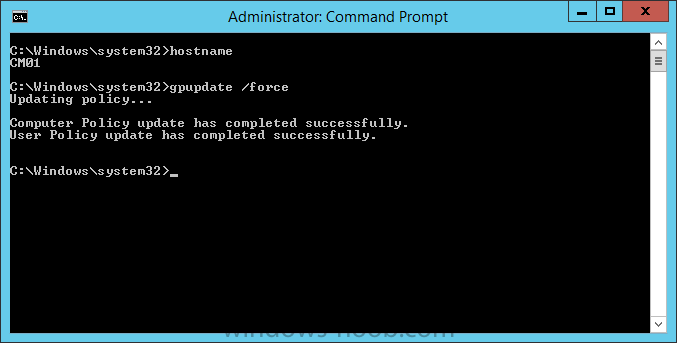 You can do this manually, or automated using the supplied PowerShell script.

* <your user name>, a domain user, this user will become a local administrator on CM01
* Testuser, a domain user
* CM_BA, used for building ConfigMgr created images

or use the supplied PowerShell script

Download and the unzip the script, run it by opening Windows PowerShell ISE as Administrator on AD1. You may need to edit the script and adjust the variables to your liking for example if you want to change the default password, you may also want to rem out the MDT and MBAM user/groups that are created and change some of the user names within.
After running the PowerShell script in Windows PowerShell ISE you’ll see something like the following. 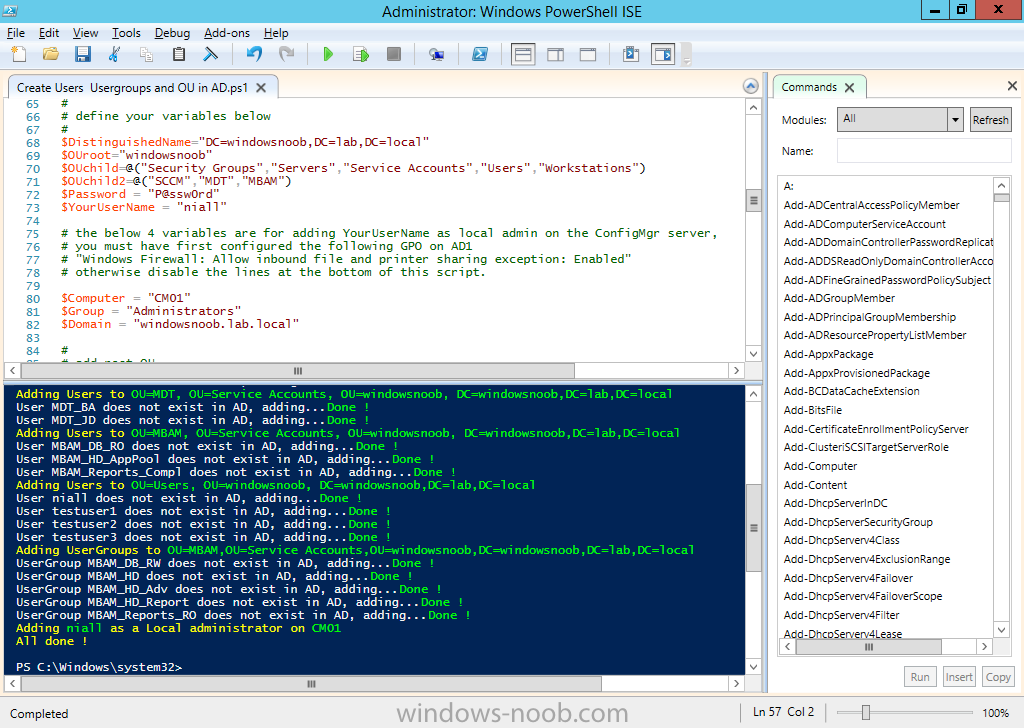 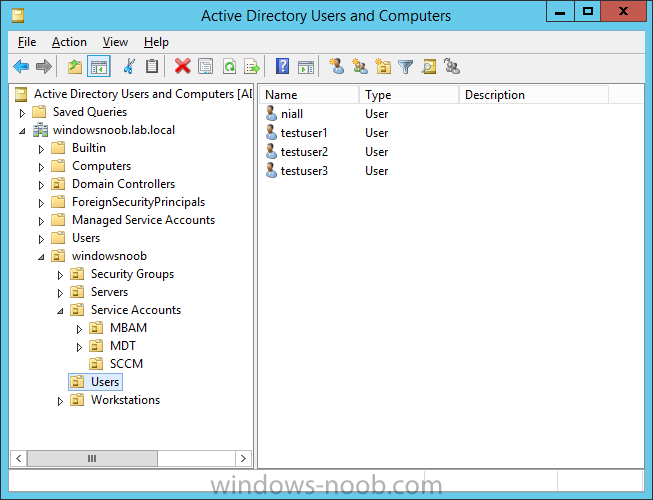 Right Click on CN=System and choose New, Object, choose Container from the options, click Next and enter System Management as the value as shown below 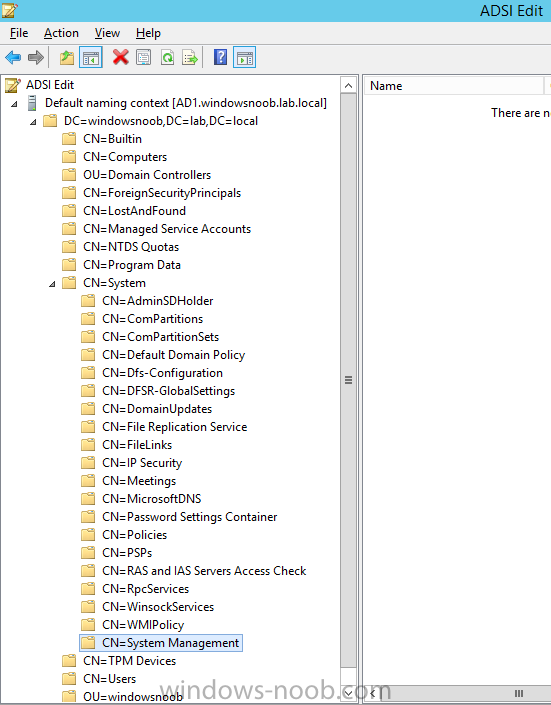 Type in your Configuration Manager server name  (CM01) and click on Check Names, it should resolve. 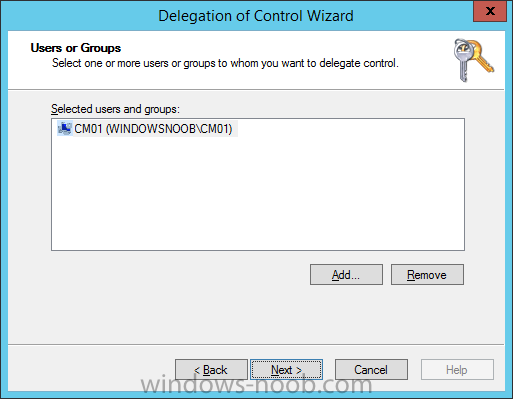 Click next, select the 3 permissions General, Property-Specific and Creation-deletion of specific child objects are selected then place a check mark in Full Control. 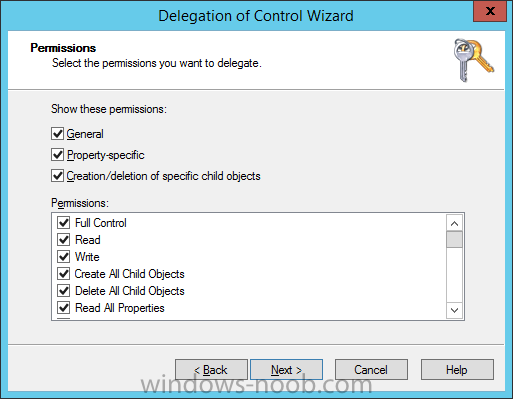 Tip: Repeat the above for each site server that you install in a Hierarchy.

To support the various features in System Center Configuration Manager, requires some Roles and Features pre-installed on CM01, so let’s go ahead and install them. On CM01, login as the username you added to the Local Administrators group and create a folder on C: called temp. Download the following zip file into C:\Temp, the XML file was created using the Export Configuration File option in Server Manager after manually installing roles and features and the accompanying PowerShell script simply installs it. Make sure your Server 2012R2 media is in the drive specified in the script. 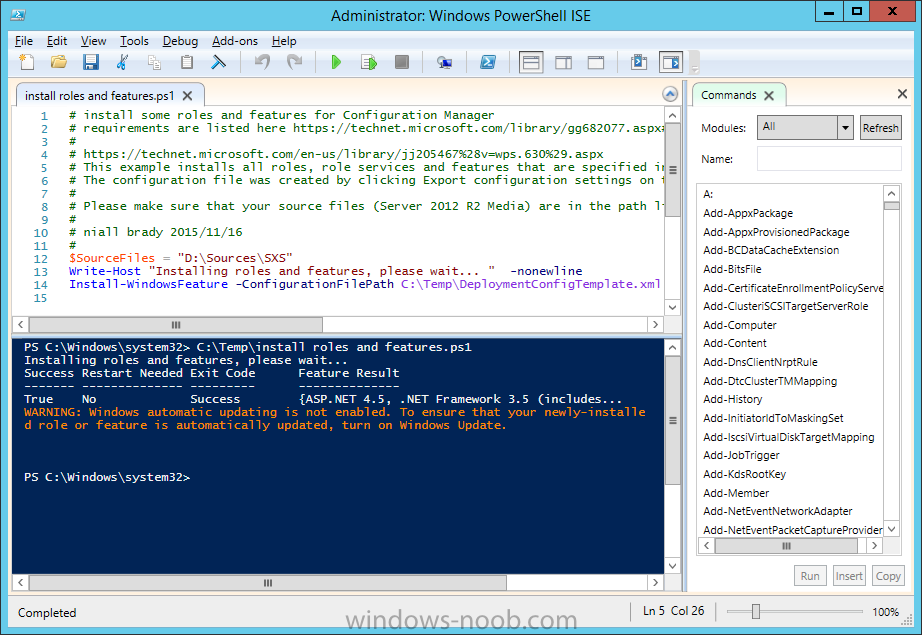 The Technical Preview prerequisite checker will check for various things, including ADK components such as USMT, Windows Preinstallation Environment, so install it on your server. To do so, either download ADKsetup from here.

Or run the following PowerShell script to download and install it for you (including installing Windows Deployment Services). 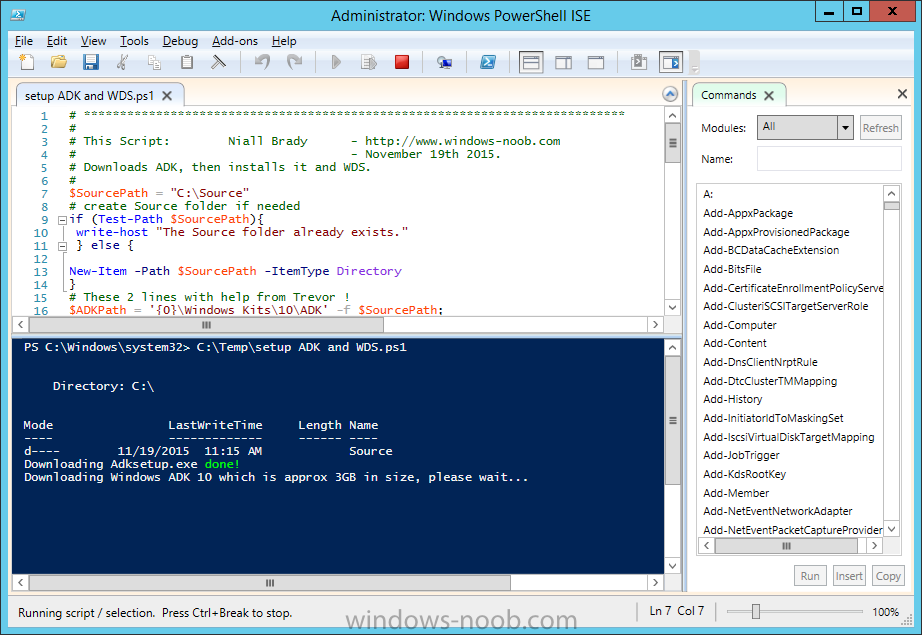 Before you install the Configuration Manager you need SQL installed, both SQL Server 2012 and SQL Server 2014 are supported however you will use the latest release, SQL 2014.

This line below will install SQL Server with the correct collation needed for ConfigMgr to C:\Program Files\Microsoft SQL Server.

If you don’t want to use that location you can change it by changing the /INSTANCEDIR in the line listed below in addition, make sure to place your SQL Server 2014 media in D:\ before running the script, if it’s on a different drive letter, modify D:\setup.exe accordingly. To start the install, open an administrative cmd prompt on CM01 and change “windowsnoob\niall” to match your domain\username, after you’ve made the edit, press enter to install SQL Server 2014.

For a list of options for installing SQL Server 2014, see this page on Technet: https://technet.micr…v=sql.120).aspx

Once installed, you should see success messages like below, if not, troubleshoot the error and/or review your command line for typos. 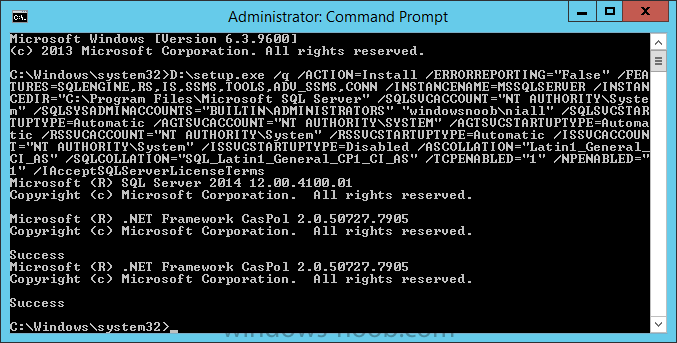 Depending on your memory configuration and server setup, you may also want to configure SQL memory limits as per the following guidance prior to installing ConfigMgr otherwise you’ll get warnings when you run the Server Readiness checks.

Based on the above recommendations i’ve configured the SQL Server memory for this standalone primary in my lab as follows: 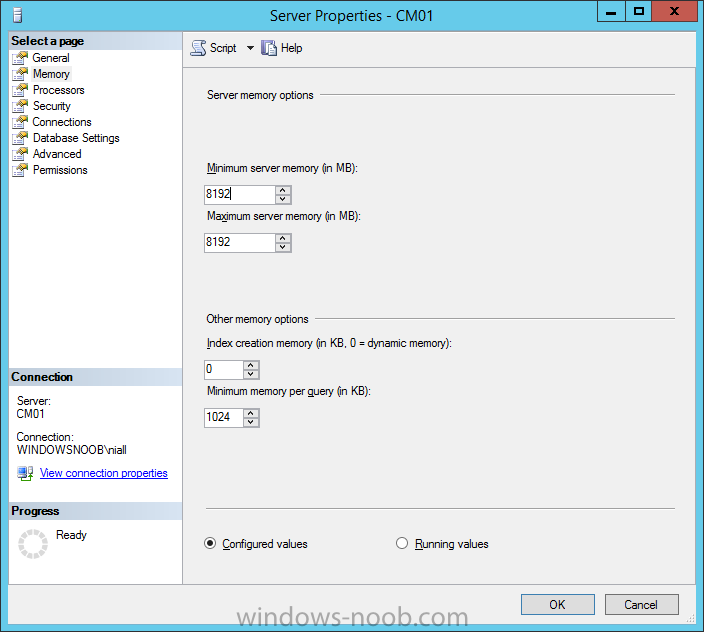 open an administrative command prompt and issue the following

Now that SQL server is installed, we can utilise that for the WSUS database. To install WSUS and configure it to use the database created above, do as follows:

browse to the location where you extracted the scripts, C:\Temp 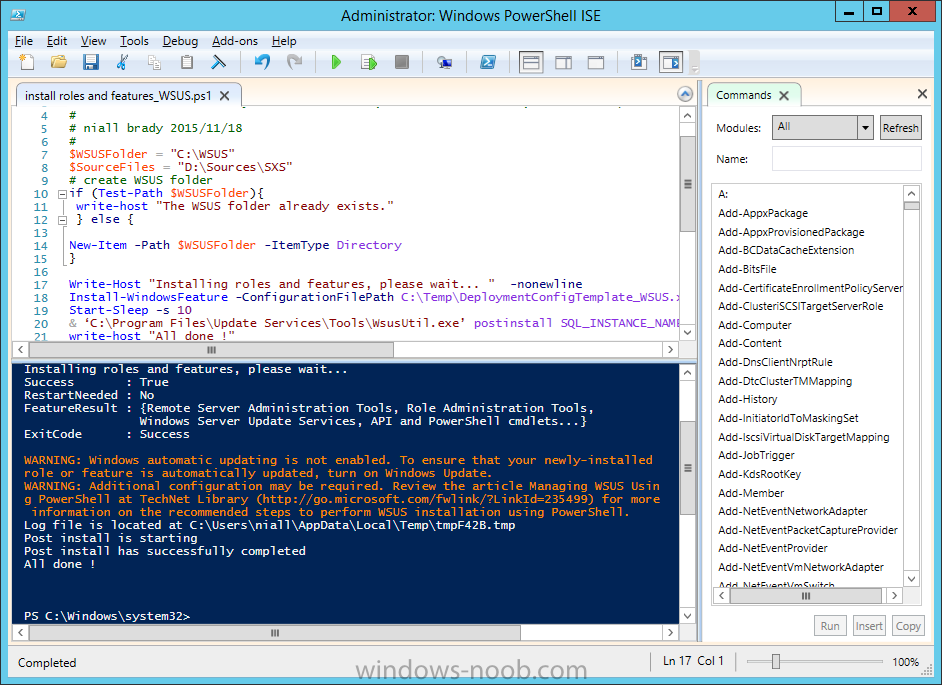 You’ll need the Technical Preview content in order to install ConfigMgr, and to get it you have to click this link and register (registration is required).

Open a command prompt with administrative permissions and Navigate to C:\SC_Configmgr_SCEP_TechPreview\smssetup\bin\X64

Note: Do not continue until the pre-requisites are downloaded.

Note: Perform the following on the Domain controller server (AD1) as Administrator

Using Windows File Explorer on the Domain Controller, browse to

A command prompt window will appear briefly as the schema is extended, check in C:\ for a log file called ExtADSch.log it should look similar to this 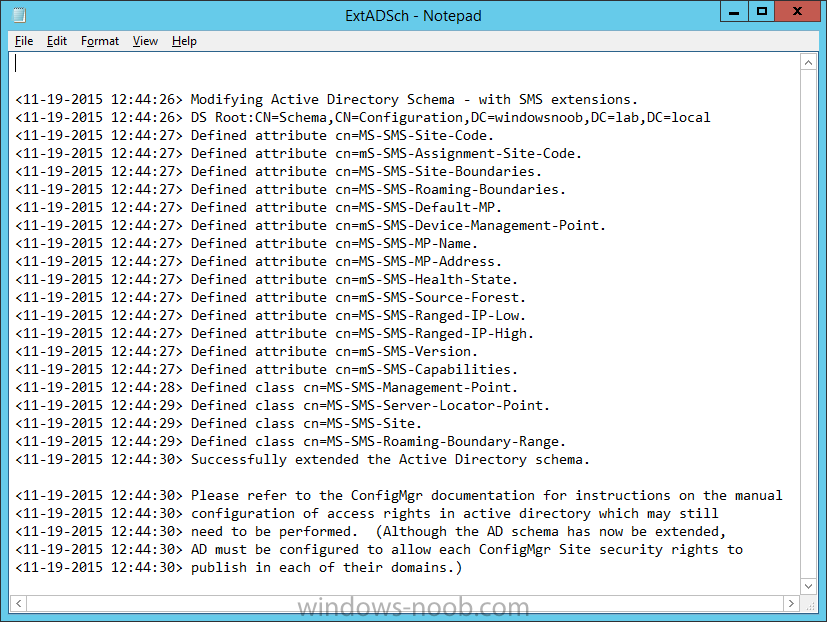 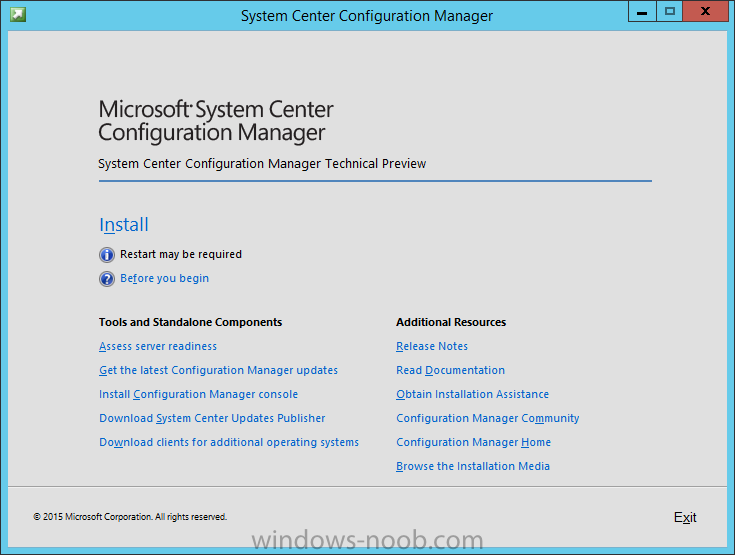 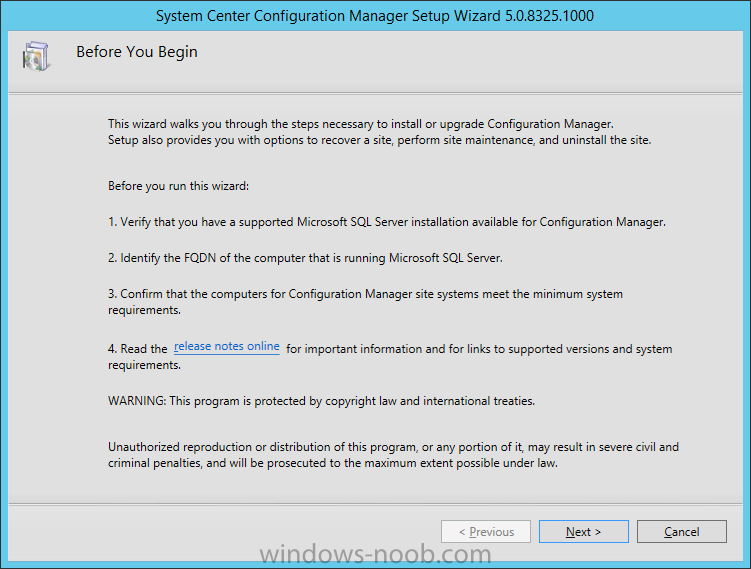 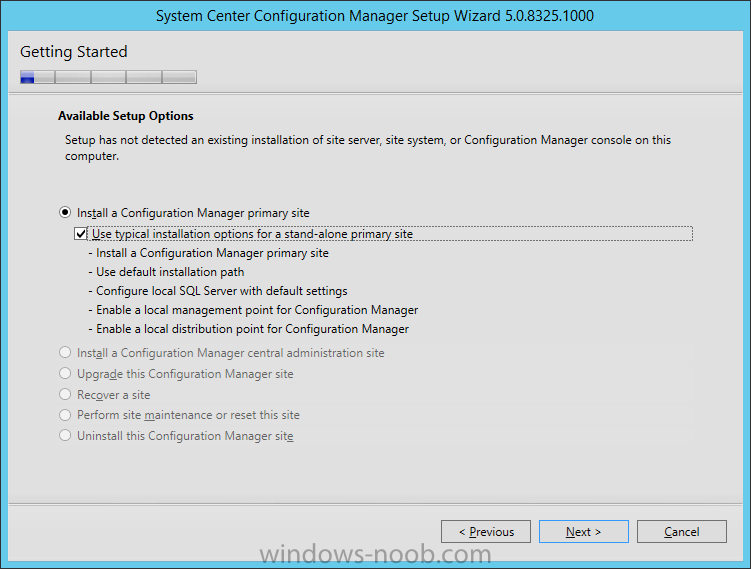 accept the two pages of EULAs 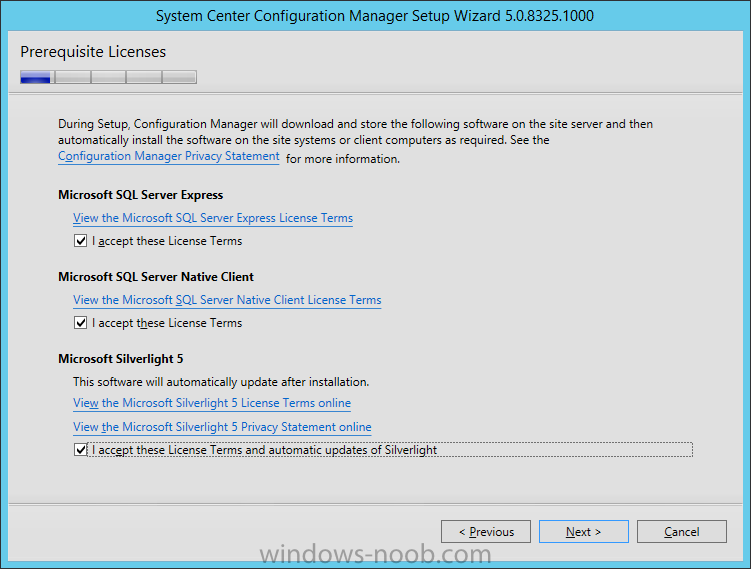 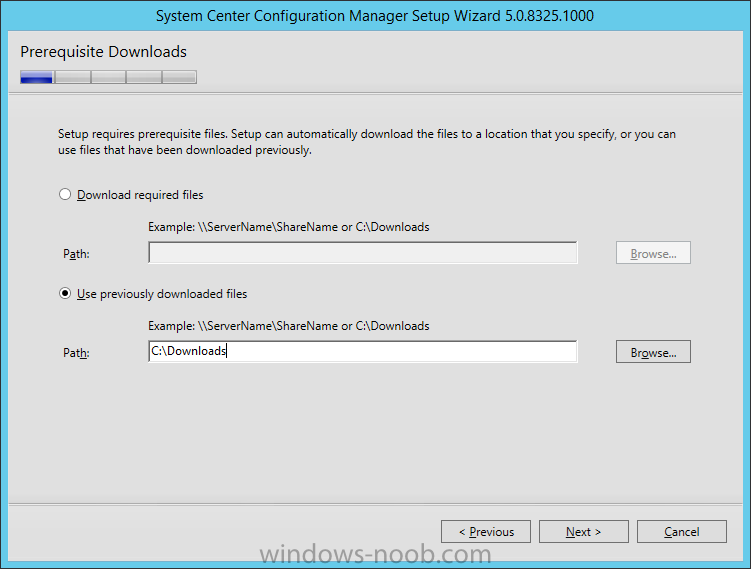 fill in your desired site code and name/path. 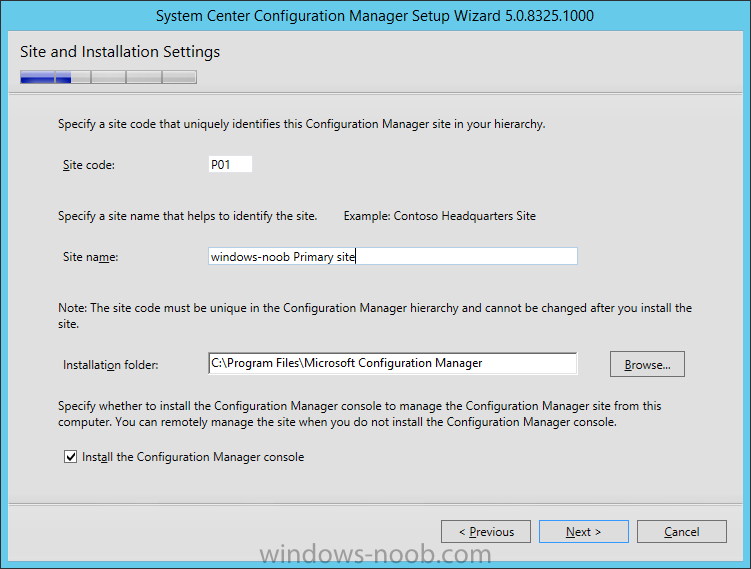 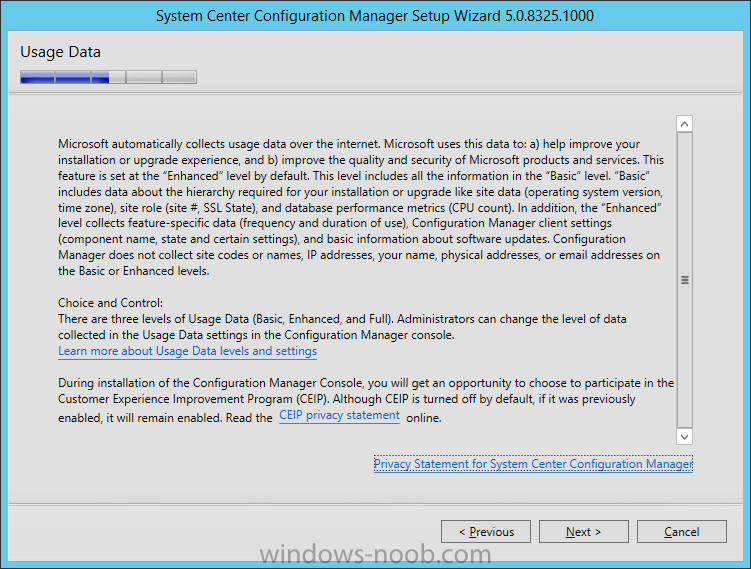 and select your Service Connection Point settings (hard coded for now), this is the setting which allows you to decide to keep up to date with Configmgr releases, by being notified about them, or not. You can change the choice later in the console. 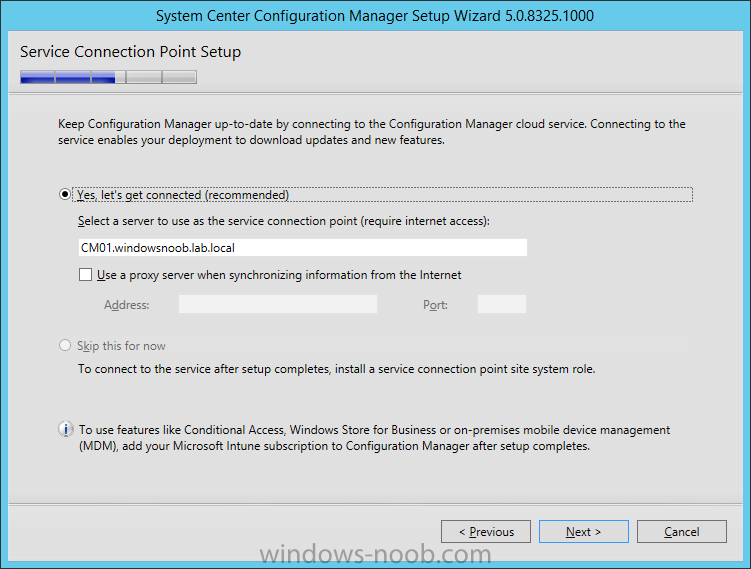 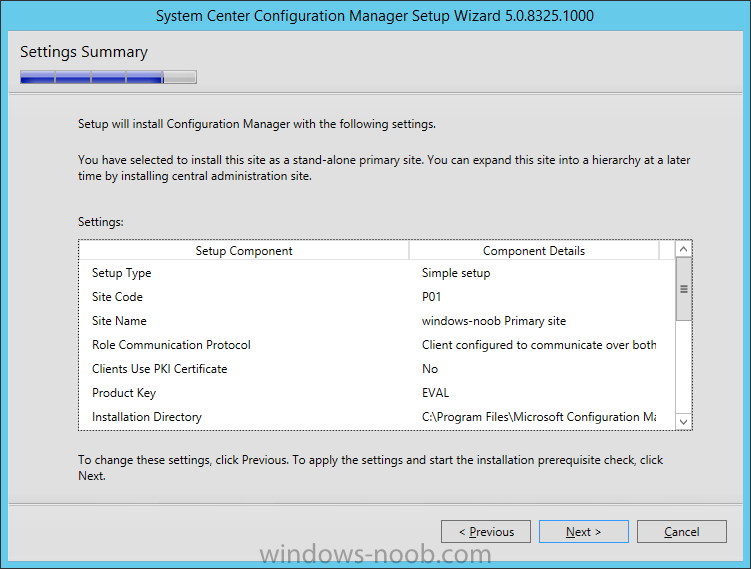 and enjoy the fact that you are following a windows-noob.com guide, so no errors or warnings are reported. 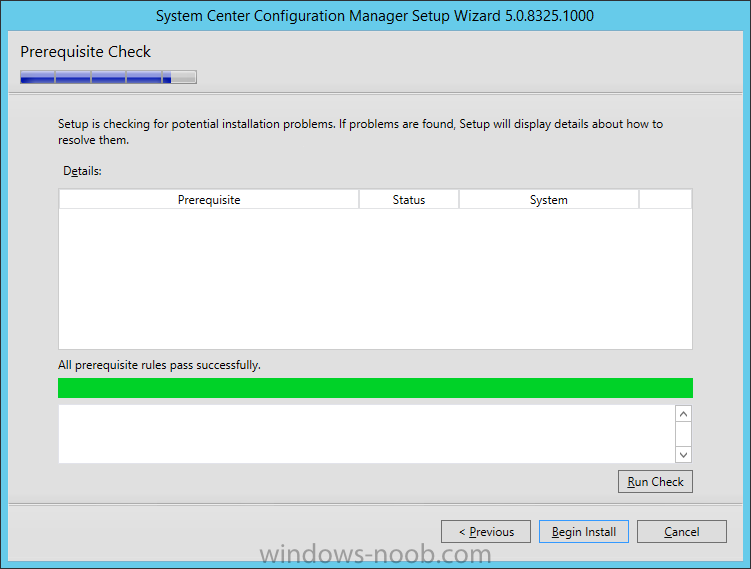 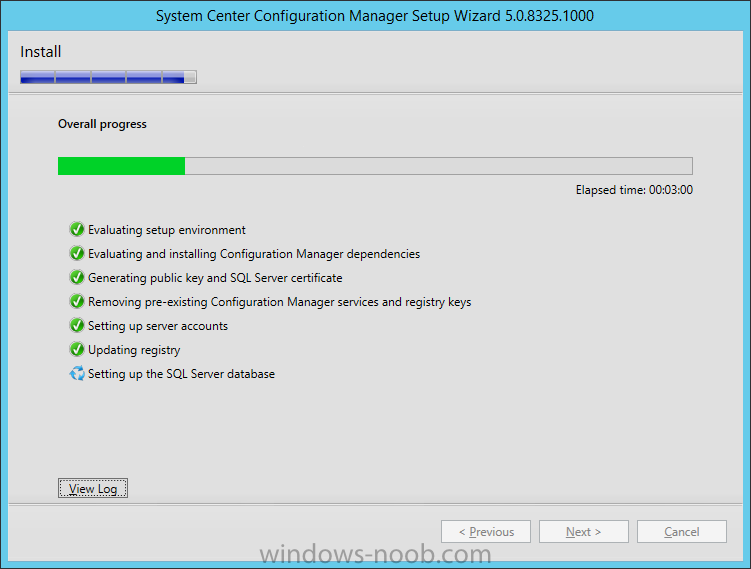 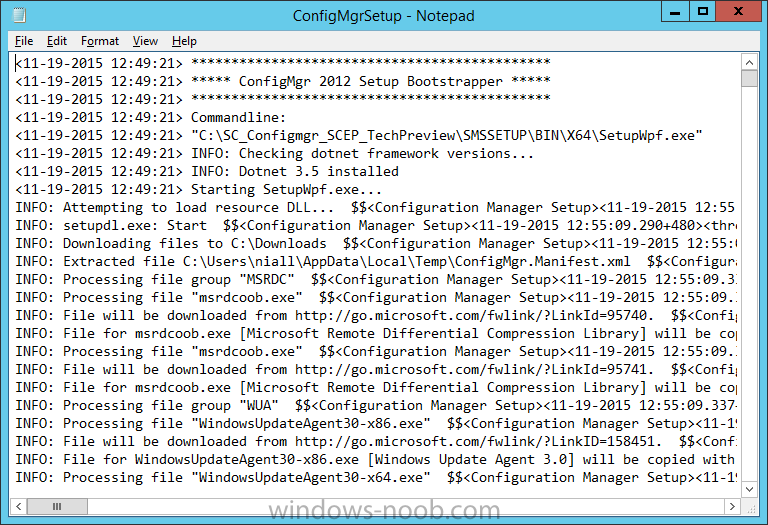 and after a certain period, you are done ! 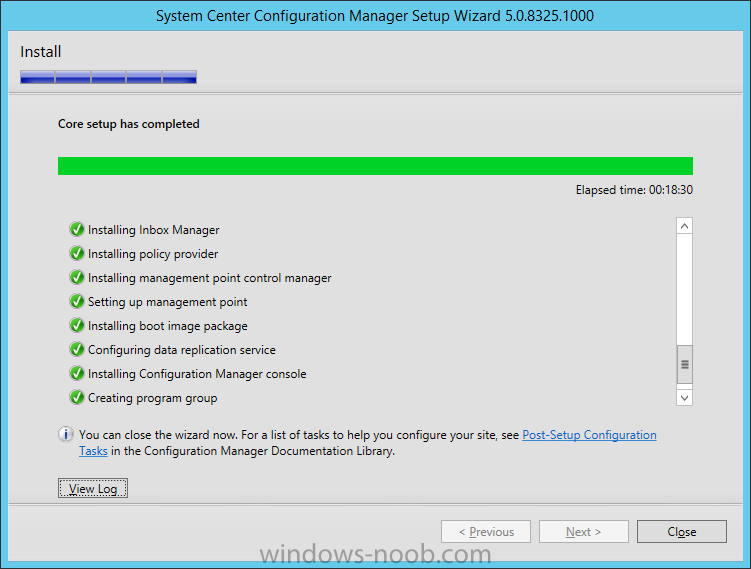 open an administrative command prompt and issue the following

Now that everything is installed, open the Configuration Manager console, click on Help, About, here’s the version. 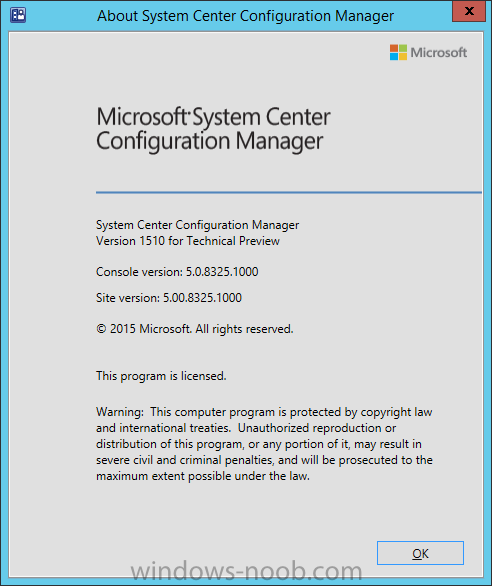