More and more touch enabled Windows 8 hardware is becoming available, which is great news for us but it also poses some technical challenges. I recently had to image some Lenovo ThinkPad 10’s with Windows 8.1 using UEFI network boot via System Center 2012 R2 Configuration Manager. 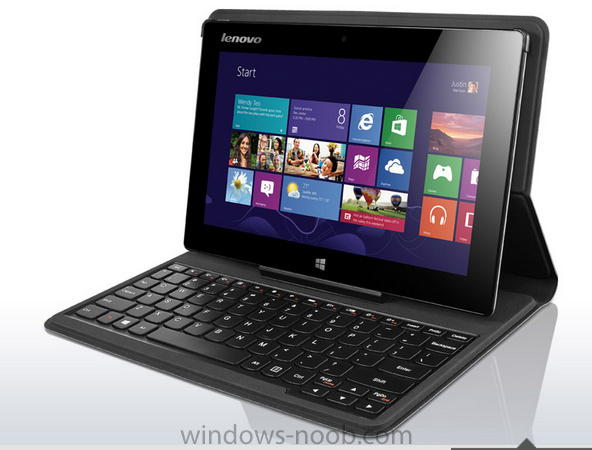 Imaging the Lenovo ThinkPad 10 using USB Bootable media posed no issue even though the same boot wim was used for UEFI Network boot. When booting this device using UEFI network boot all was fine until just after the nbp (network boot protocol) part of the process started, this was even before the PXE password was presented. The problem was that the video resolution was set to something like 800×600 which means displaying any sort of Frontend HTA or UDI wizard to end users will look terrible.

A colleague of mine (thanks Magnus) started testing with unattend.xml, wpeinit and drvload and got some good results so I set about putting a working solution together in a task sequence.

We will use drvload to load the video driver while still in WinPE as one of the first steps in the task sequence, normally you do not need to do this however in this case it’s required as the video resolution is unusable.

Download the Chipset driver for the Lenovo ThinkPad 10 from Lenovo’s website here. Once done, extract it somewhere by double clicking on the EXE file. By default it wants to extract the drivers to C:\Drivers. Browse to the path of the extracted drivers and locate the GFX folder as shown below

Copy the GFX folder and all files and folders within in to your Configuration Manager package sources share, for example \\sccm\sources\os\drivers\Lenovo\ThinkPad10\Video\GFX as shown below

In the Configuration Manager console, create a new Package in Software Library, 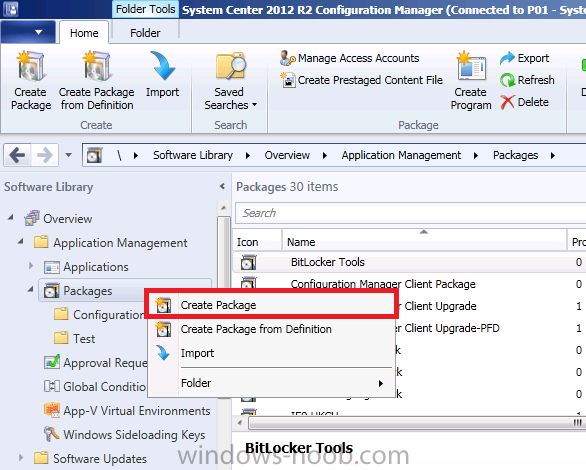 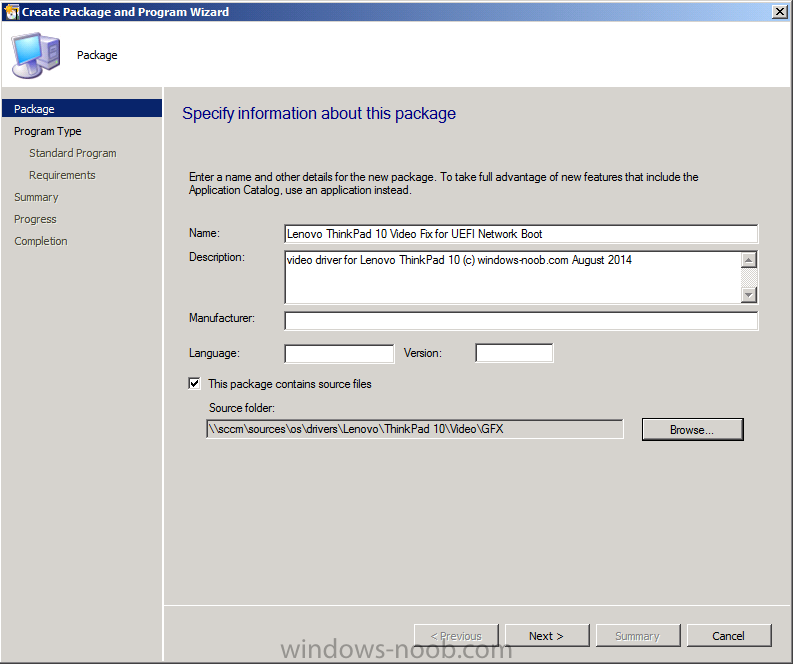 with no Program as shown below 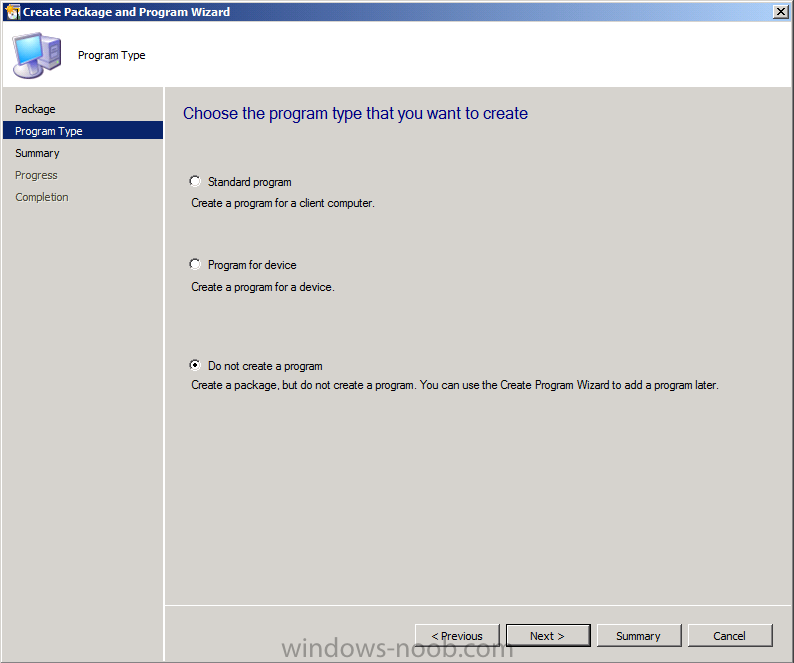 continue through that wizard until completion 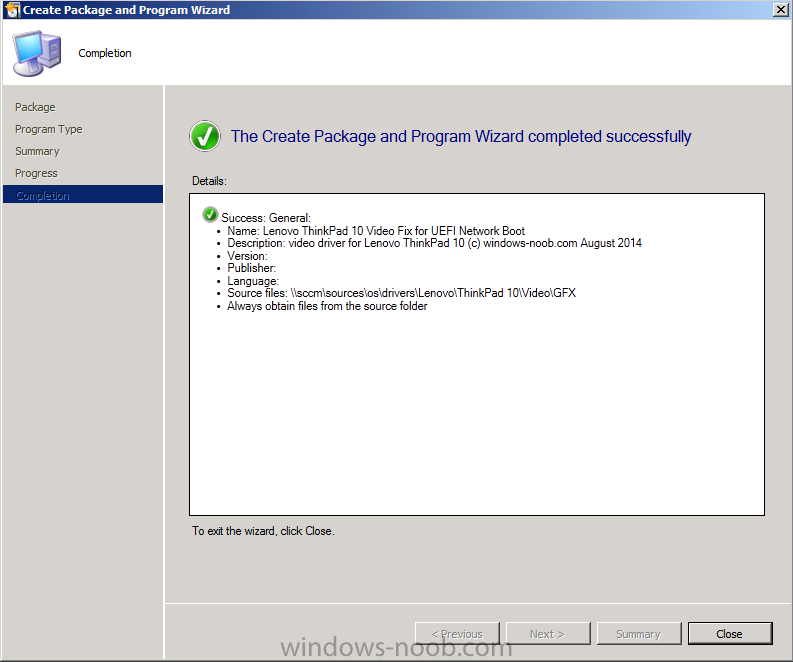 Step 3. Distribute the package to your distribution points 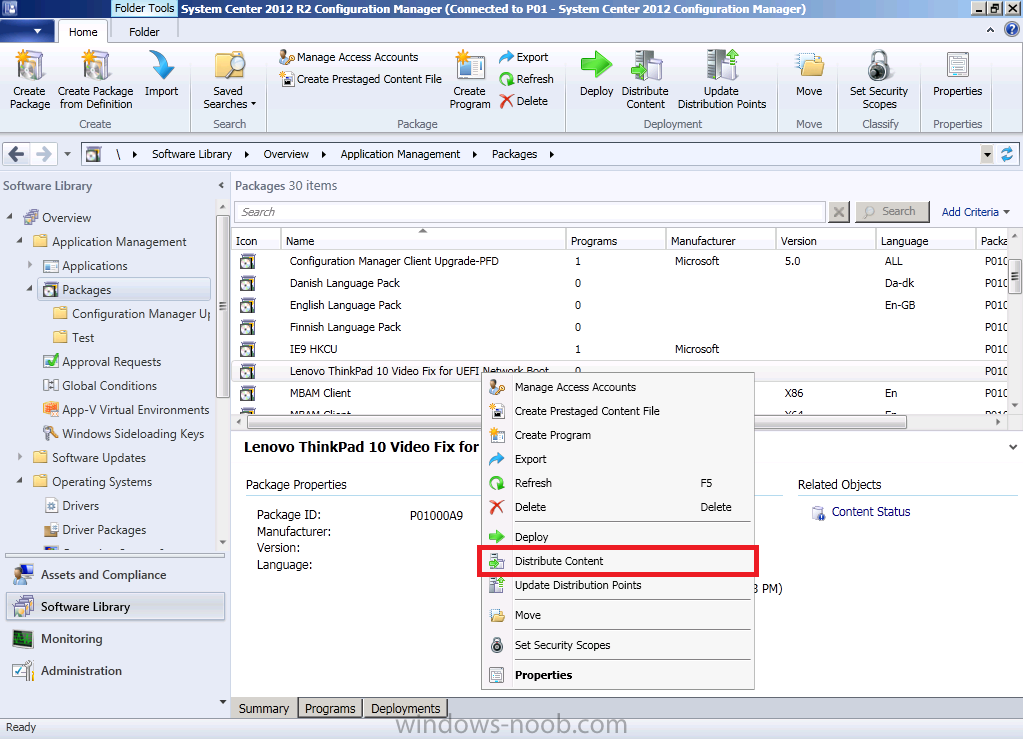 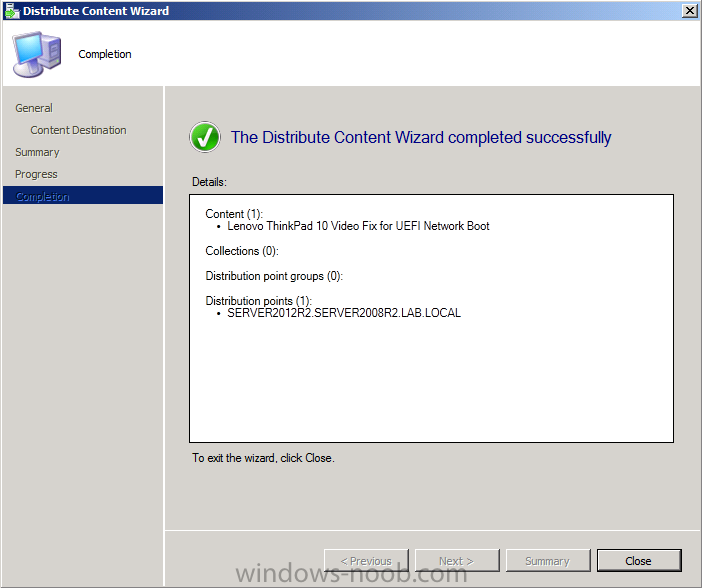 Step 4. Edit your task sequence and create a new Group

Open up your deployment task sequence (I used the CM12 BitLocker Frontend HTA available here) and create a new group called Lenovo ThinkPad 10 UEFI Video fix. Next, on the options tab create a new If statement, where ALL the conditions are true. The conditions to check for are: 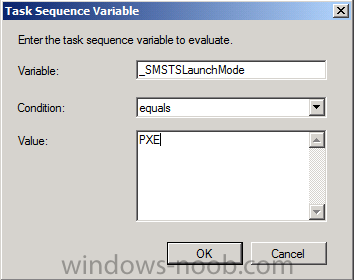 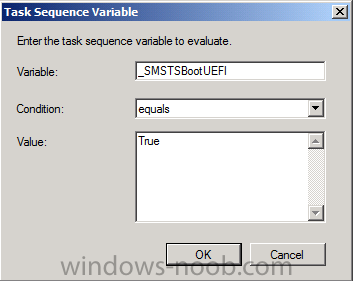 add a new wmi query as the one shown below

so that the finished options tab look exactly like below 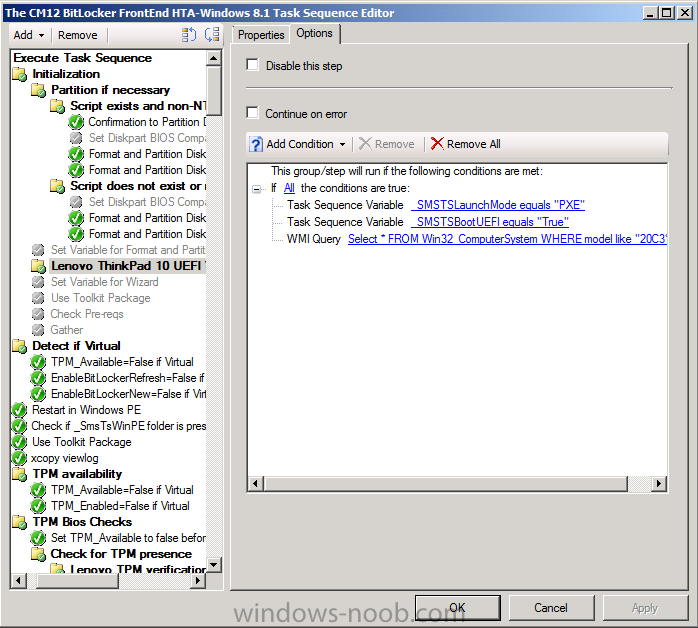 Next within the new group, create a Run Command Line step, make sure that the step occurs somewhere at the start of the task sequence before any HTA, Frontend or UDI wizard is displayed such as in the example below. This step will work fine whether or not you have an MDT Integrated task sequence as it uses the _SMSTSMDataPath variable. 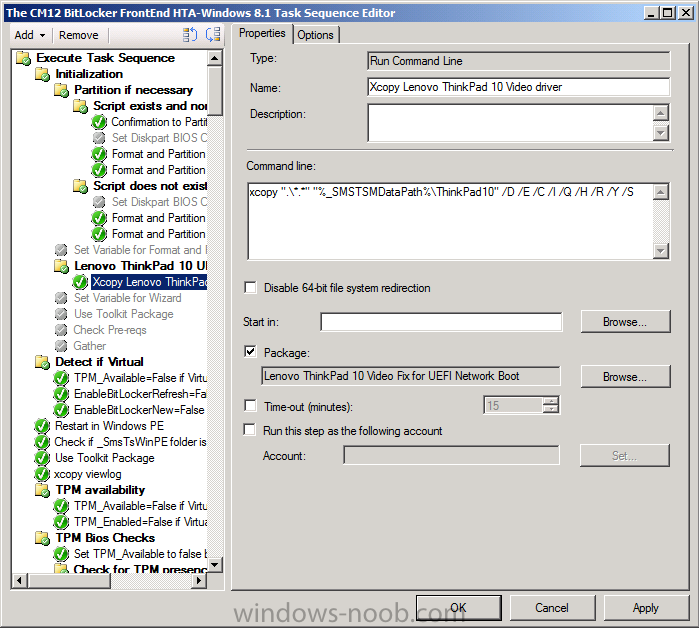 the command line of the xcopy is

make sure that you point to the package created in Step 2 above.

Next, create another new Run Command Line, and use the following command line 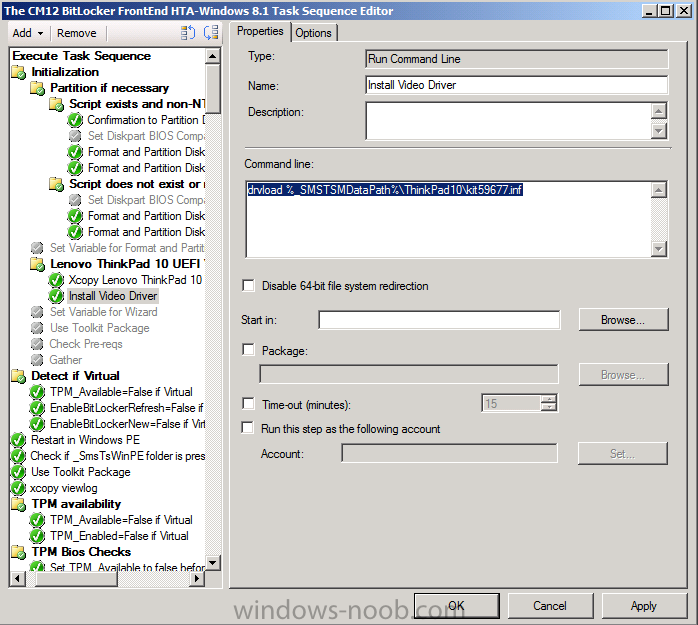 Create a text file called unattend.xml and copy it to your Video driver package created in step 2 above, redistributed that package to your distribution points, the contents of the file should be as below 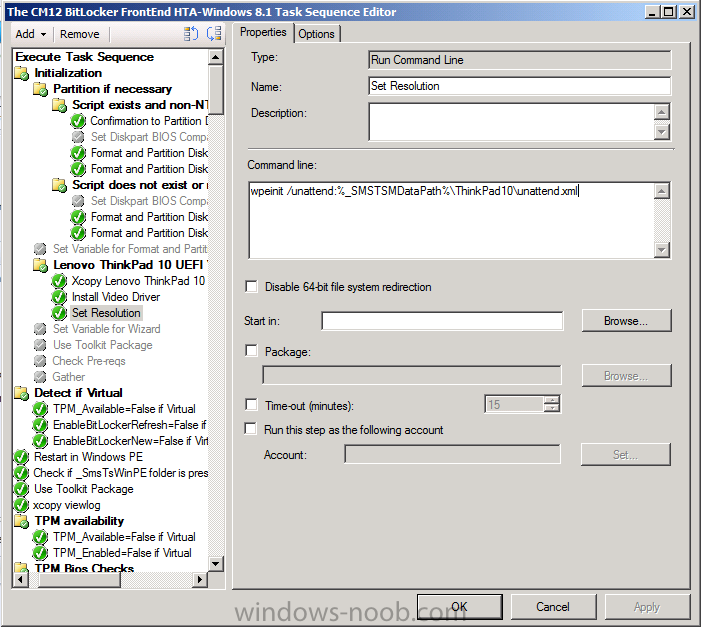 Note that the unattend.xml file will not work unless the video driver above is loaded first.

Make sure the unit is shutdown first. Then initiate a UEFI network boot (PXE boot) by holding the volume down key (right side) and Power button (top side). I used a USB 3 ethernet dongle attached to a USB hub and a USB keyboard. 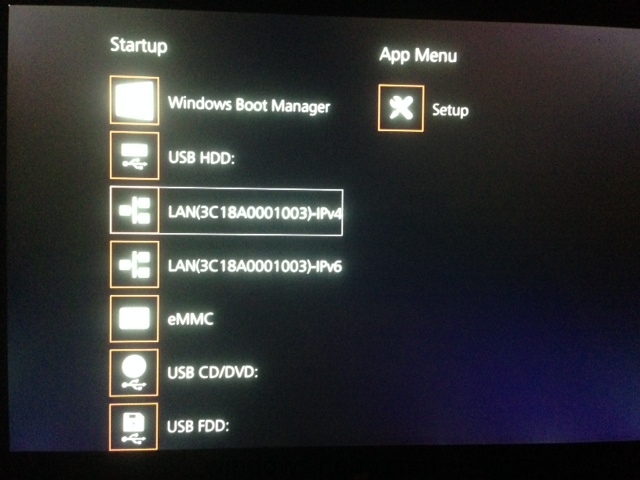 then the UEFI network boot process starts, press enter or it won’t boot 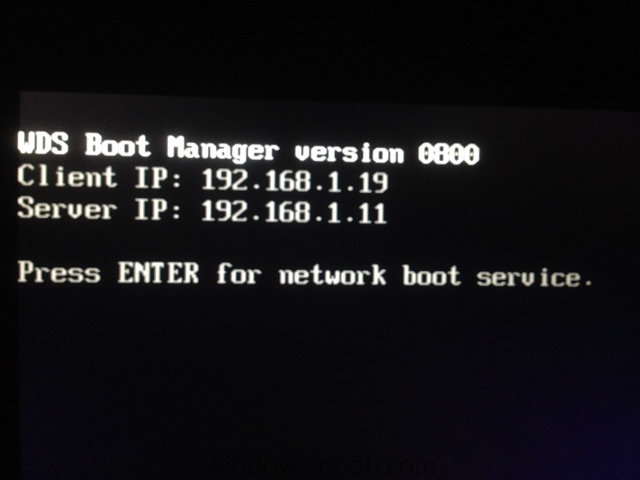