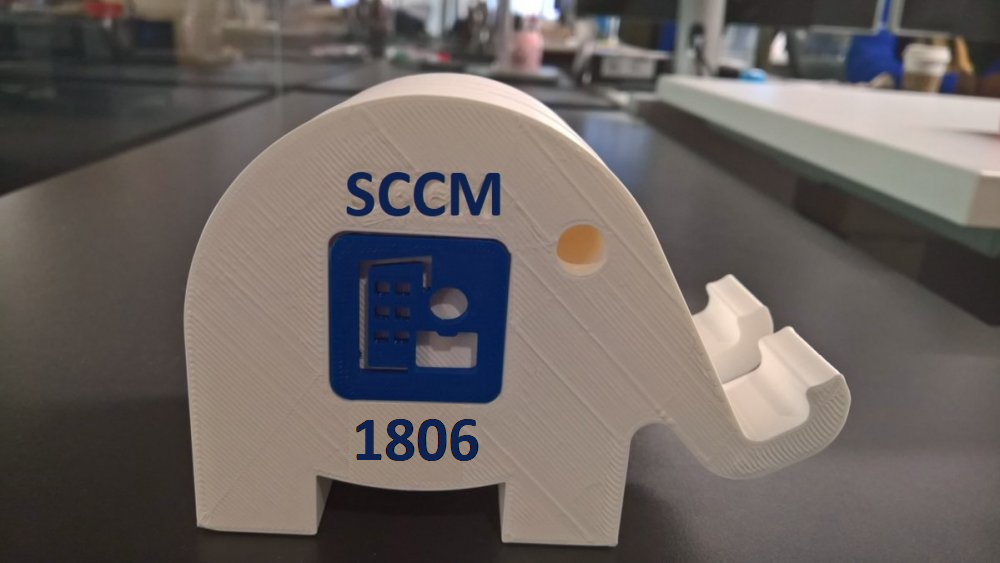 The white elephant above is based upon an original graphic which I found here, thanks Djam !

This is no less than the 9th release of the Current Branch series and that’s a great achievement by @djammmer and his team.

System Center Configuration Manager (Technical Preview) is for lab testing environments only and is limited to a small number of clients. Technical Preview releases are released monthly, and contain the latest and greatest features that are being trialed in the product, and usually these new features are the result of feedback from uservoice.

Note: You cannot upgrade from a Current Branch to Technical Preview or vice versa, they are two distinct different branches.

I’ve created the this text file showing the 9 Current Branches versions which have been previously released since Microsoft moved to the Current Branch release cadence for Configuration Manager.

You can download it by clicking on this link: System Center Configuration Manager Current Branch releases

A note about Baseline releases

In a previous post you used PowerShell scripts to install System Center Configuration Manager (Current Branch) version 1702. This post will focus on upgrading from one current branch version to version 1802. This post assumes you are running a minimum version of 1702 (or later) of System Center Configuration Manager (Current Branch).

Note: Before upgrading, please review the following checklist to verify you are ready for the update.

Do you want it now or later ? When new Current Branch releases are made available to the public, you have the choice of getting the release immediately  or waiting a few weeks until after it has released to all the general public.

The fast ring method only works for the first 2 weeks or so after an update has been announced, after that 2 week period, it becomes available to the slow ring and shows up in the console without the need for running any PowerShell script. The Fast Ring are for the early adopters, those living on the edge.

If however you decide to wait a couple of weeks after the release is publicly available, then the upgrade will be released to the slow ring and at that point it will show up in the ConfigMgr console for all Current Branch hierarchies.

Slow Ring users know that any issues detected in the Fast Ring, should be resolved by the time it releases to the Slow Ring.

To use the fast ring PowerShell script, download it, and run it to self-extract to FastRingScript_XXXX (where XXXX is the ConfigMgr release number).

Once extracted, start an Administrative PowerShell command prompt in that folder and from there use the following command (where CM01 is the <SiteServer_Name | SiteServer_IP> of your CAS or standalone Primary site server). 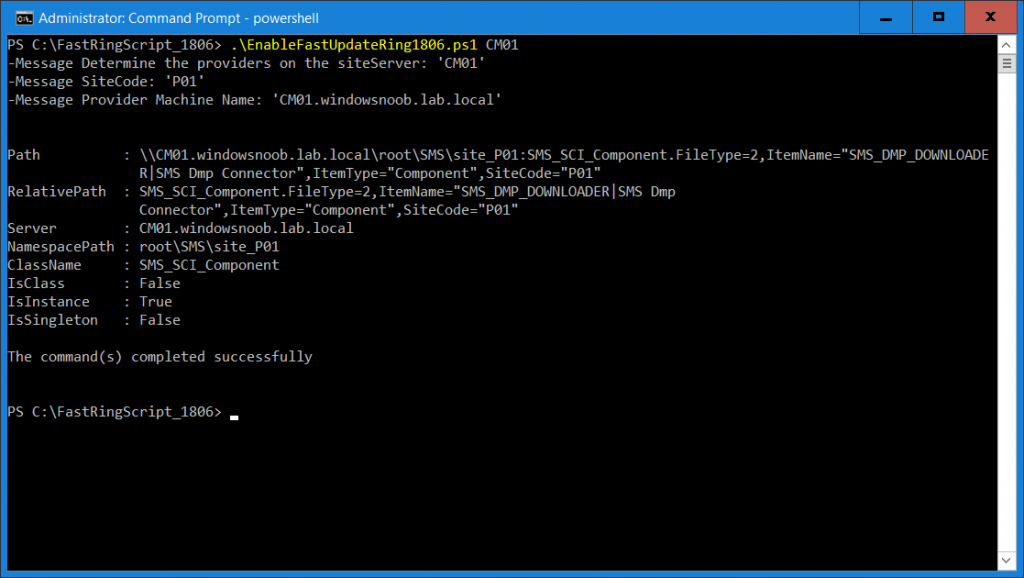 Next, open the ConfigMgr console and find Updates and servicing in the Administration node. Click on Check for Updates in the ribbon, followed by Refresh. After a few minutes you should see that Configuration Manager 1806 is listed with a state of Available to download.

After some time the update will automatically start downloading at which point you can open the dmpdownloader.log using CMTrace to keep track of things. 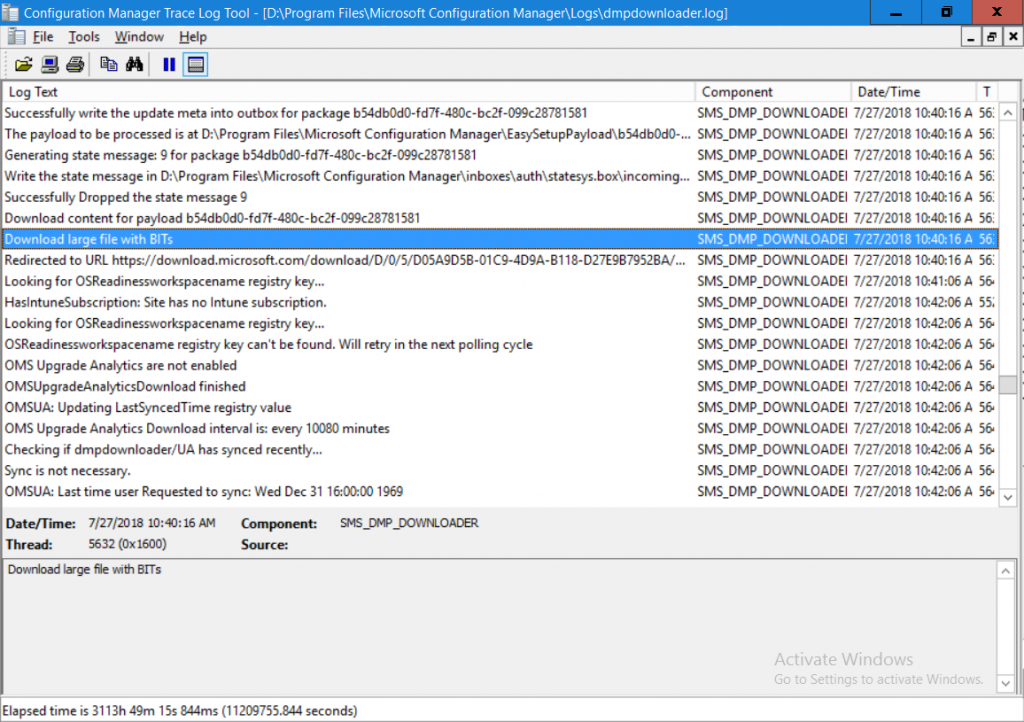 Right click on the update and choose Install Update Pack. When the Wizard appears, make your choice for pre-requisites and click Next.

Review the features included in this update pack , and make selections if you wish, you can always add them later in the Console.

Note: You’ll also notice lots of Pre-Release features that are greyed out, to turn them on see the steps after upgrading the console the bottom of this guide.

In the console, the update pack state will change to Installing (refresh the console view to see this).

Clicking on Show Status will give you detailed info about the state the Installation is in, there are 5 distinct phases in the top pane: 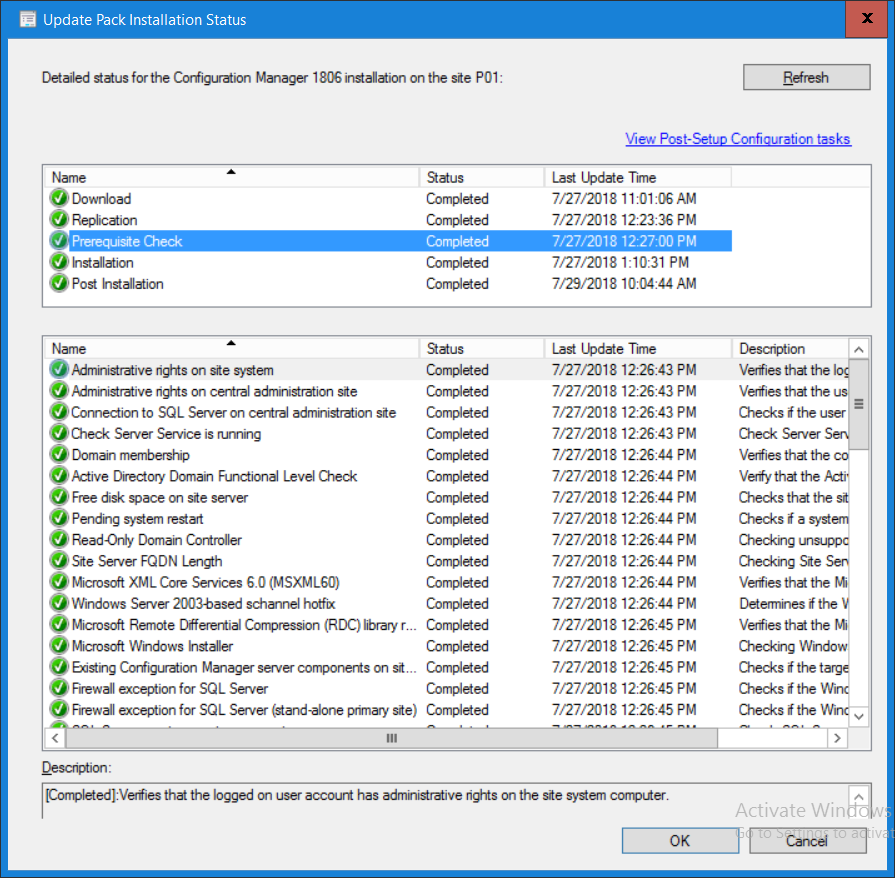 Selecting a phase will highlight what state the update is in, including what (if any) problems it has.

During the upgrade you should monitor the following log files available in <drvletter>:\Program Files\Microsoft Configuration Manager\Logs, you can use CMTrace to do so.

These logs will detail the installation of the update pack. 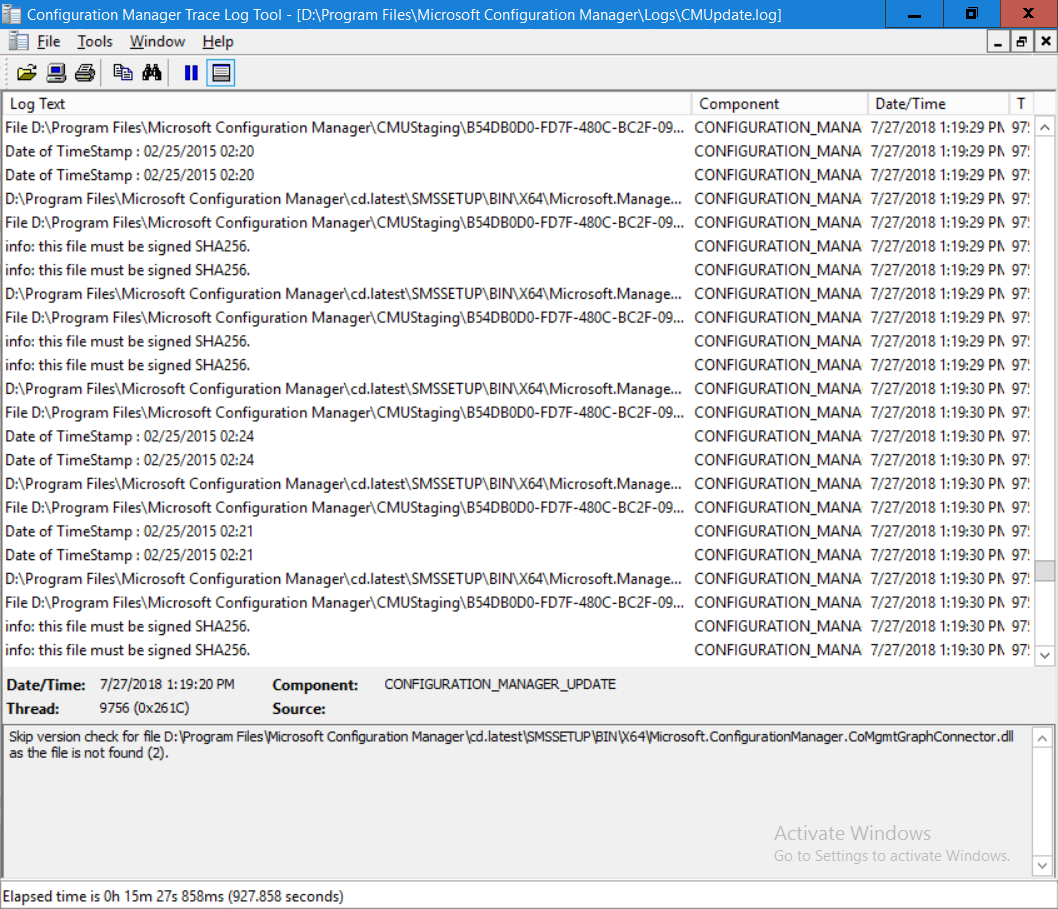 you should also pay close attention to the following log files present in the root of C:\. 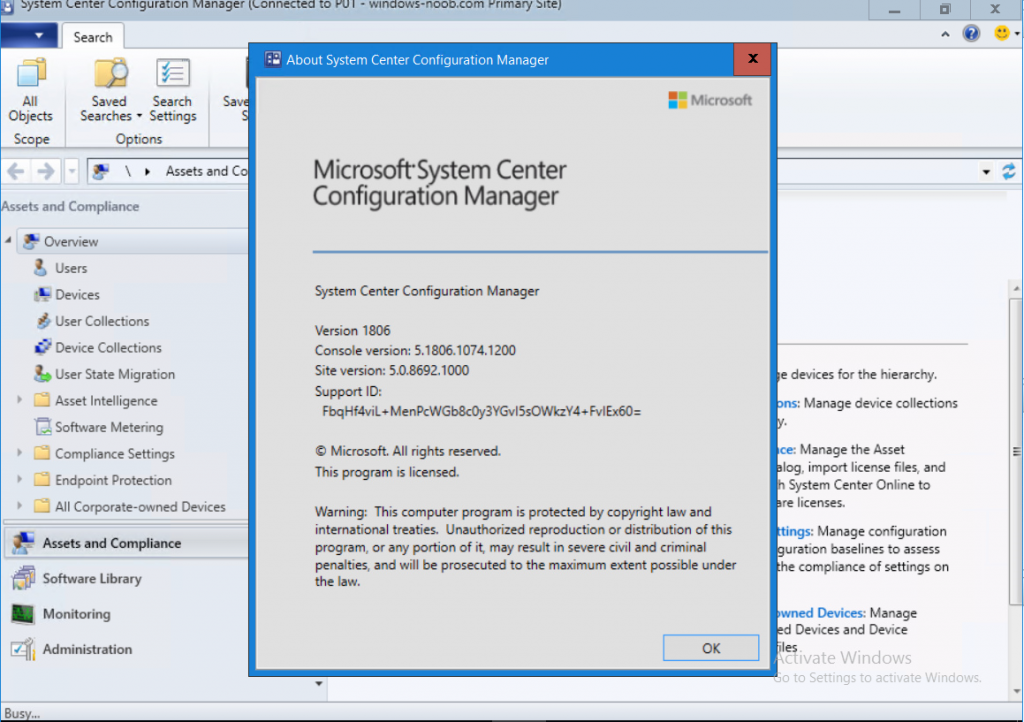 and you can even check your Current Branch history.. 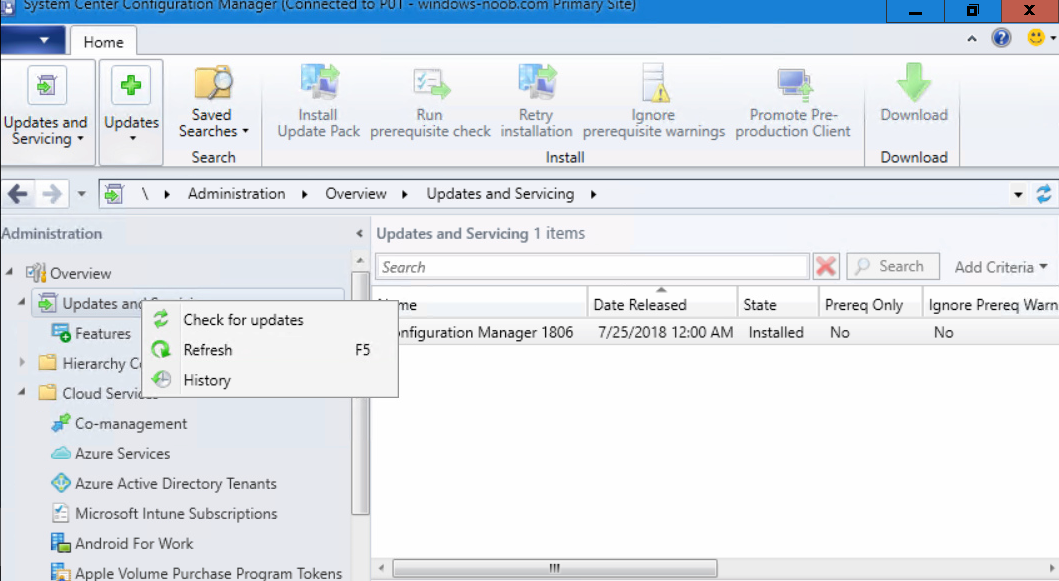 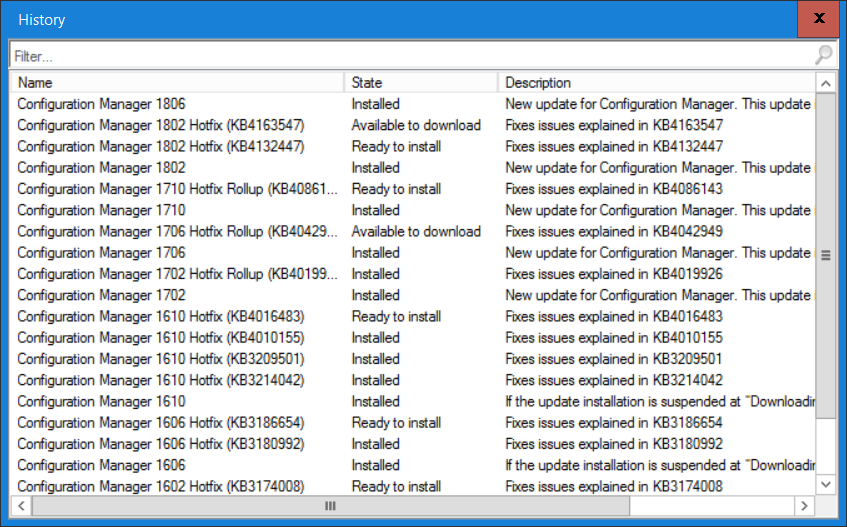 Using HTTPS communication is recommended for all Configuration Manager communication paths, but can be challenging for some customers due to the overhead of managing PKI certificates. The introduction of Azure Active Directory (Azure AD) integration reduces some but not all of the certificate requirements.

This release includes improvements to how clients communicate with site systems. On the site properties, Client Computer Communication tab, select the option for HTTPS or HTTP, and then enable the new option to Use Configuration Manager-generated certificates for HTTP site systems. This feature is a pre-release feature. 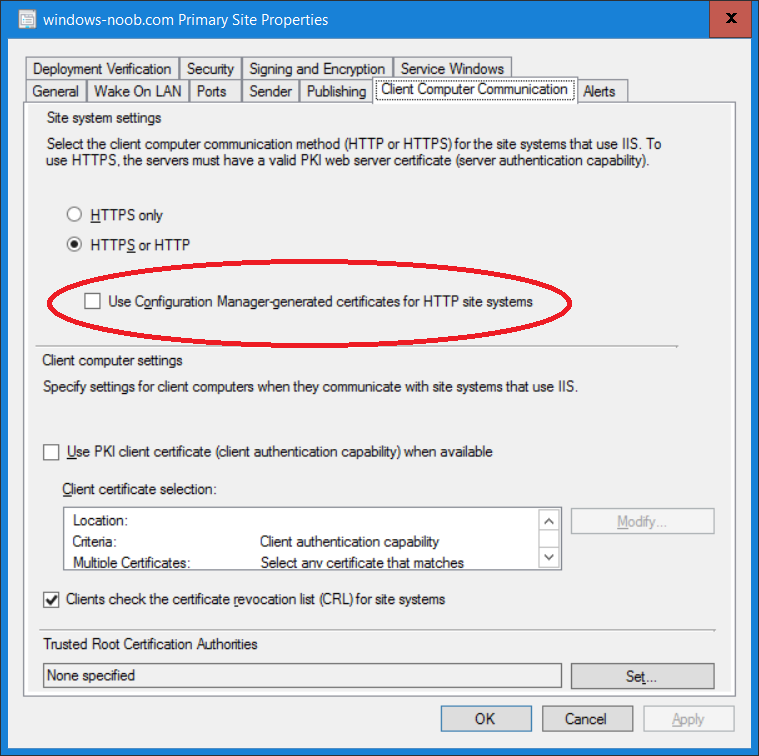