This script has been updated with the following changes: 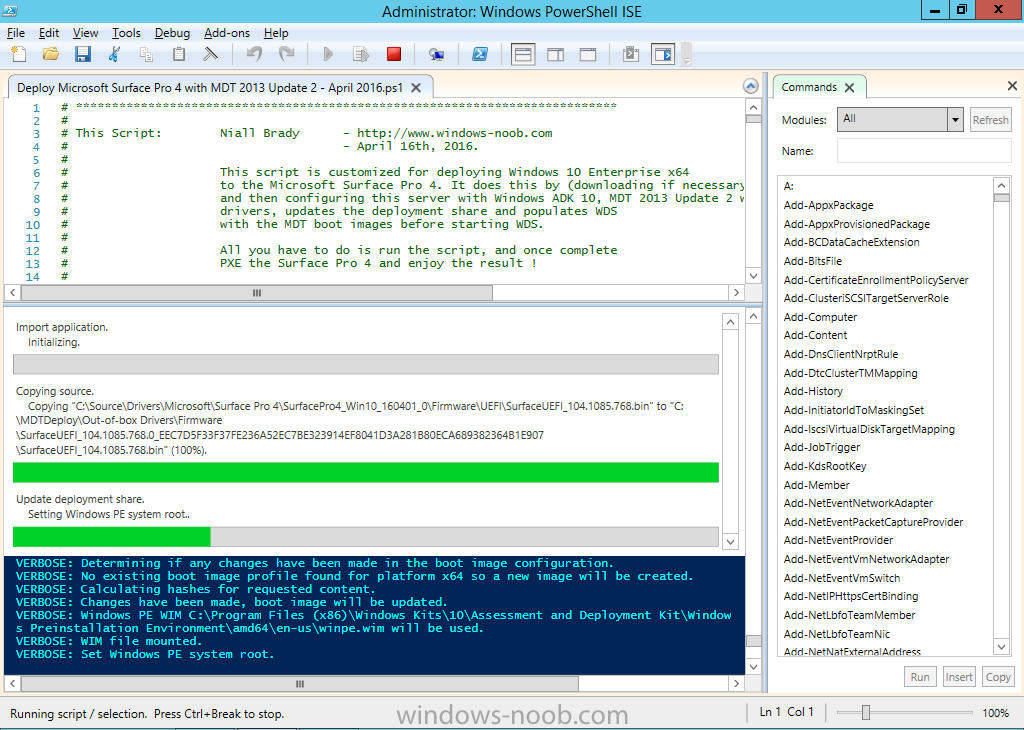 Note: Microsoft has released two versions of Windows 10 x64 (version 1511). The first release was the original and released in November 2015, the second release was an updated release in February 2016. For this guide I’ve used the February 2016 release available on the Microsoft Volume License Site. The script does care which release you use, as the previous release of Windows 10 x64 version 1511 shows up as Technical Preview wheras the February release does not. 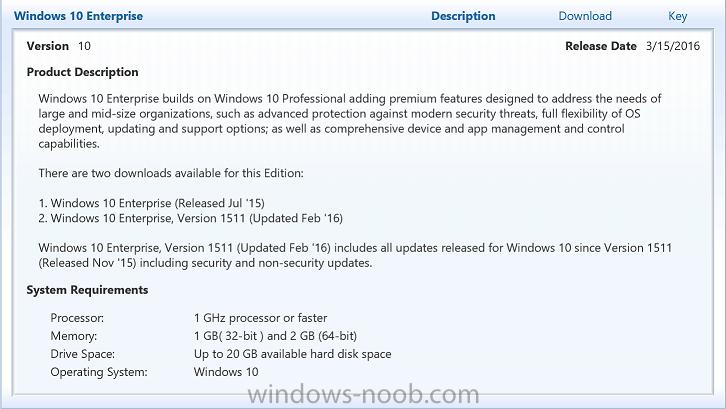 Note: This is fully automated, and as this does install a Windoes Deployment Services server role hosting a boot image, you should modify the script accordingly and test it thoroughly in a lab first.

This script is tailored for one thing only, deploying Windows 10 x64 to the Microsoft Surface Pro 4 with all drivers loaded and MDT 2013 Update 2 pre-configured. Download it and customize it to suit your needs for other hardware if you wish because what it does is pretty cool.

All you have to do is download the script below, modify some variables, then place certain files in the right place such as the Windows 10 x64 Enterprise (version 1511) media. Please ensure you have a working DHCP scope on your Active Directory domain controller, then PXE boot a Microsoft Surface Pro 4 and sit back and enjoy the show.

The PowerShell script will do all the hard work for you, it is in the Downloads section at the end of this guide, download it, unzip it and place it on a server (running Windows Server 2012 R2) that is designated to be the MDT 2013 server. I’ve tested it on Windows Server 2012R2 only, if you run it on a different operating system and have issues then please post your results below.

The most important of them is the $SourcePath variable (line 59) as this decides where to get the content from and where to store it. This variable should point to a valid drive letter, the folder name will be created if it does not exist. 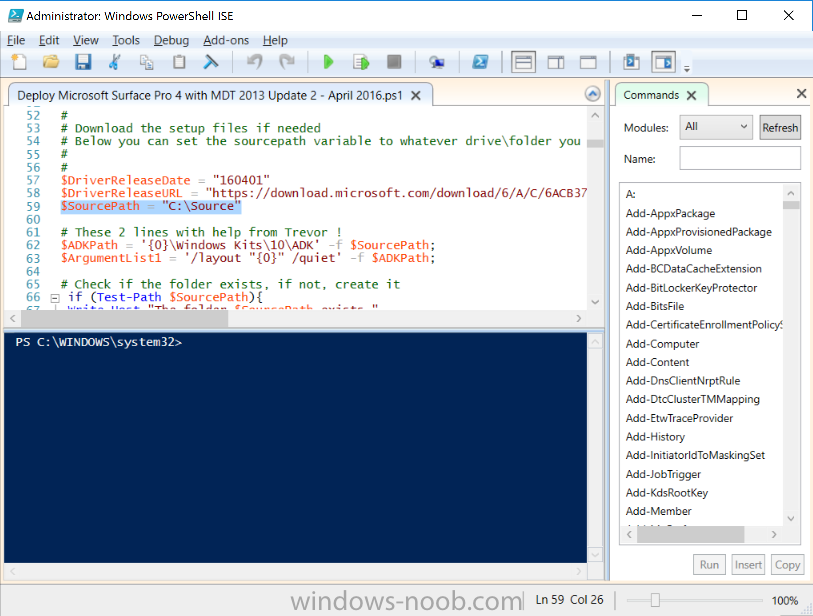 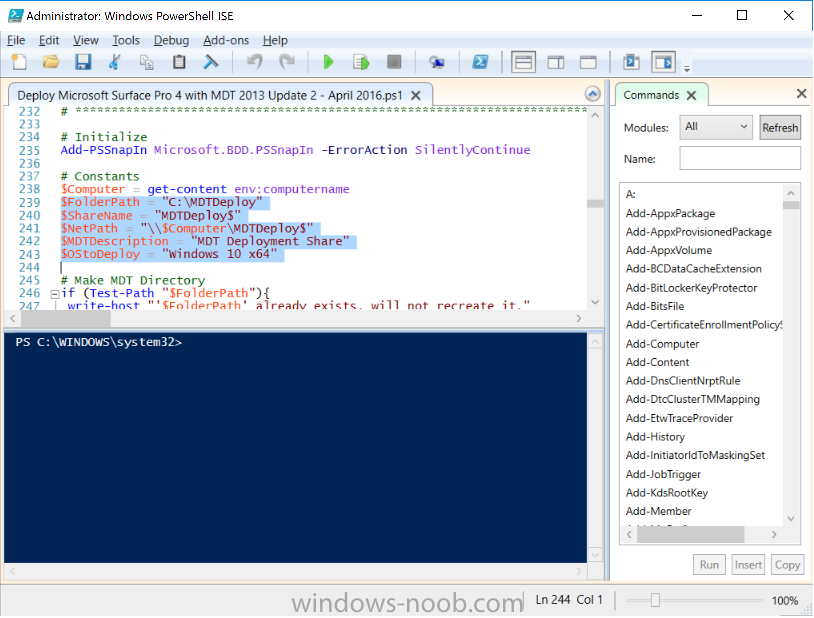 There are other variables to configure, for joining the Domain (lines 316-318) 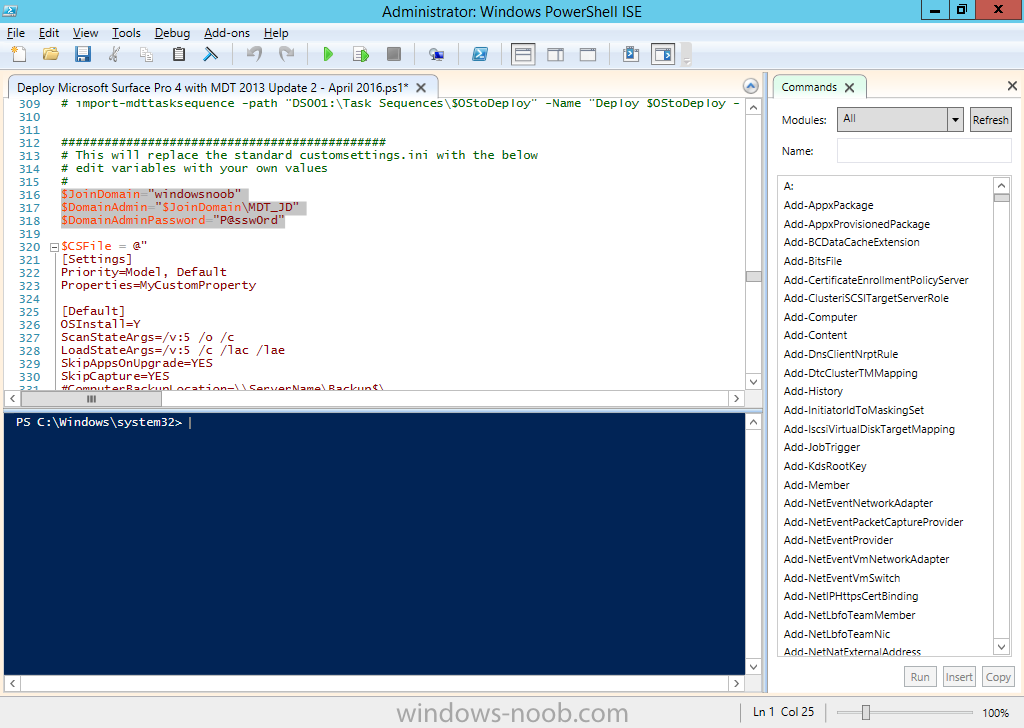 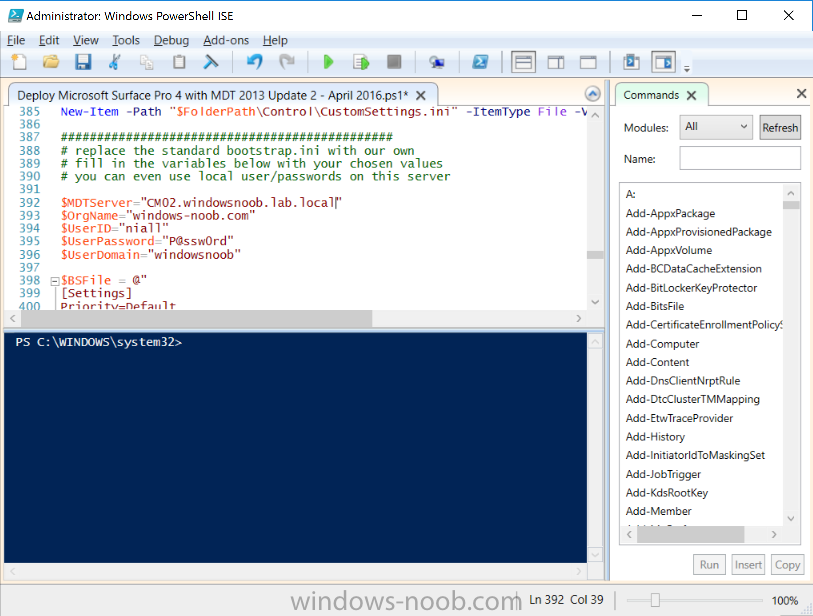 Step 5. Optionally copy your Applications to the respective folders

This is an optional step. If you have apps like Office 365, copy them to their respective folders under Applications

If you do add any applications, you’ll need to edit the corresponding section within the script for the CustomSettings.ini and replace the guid for the App 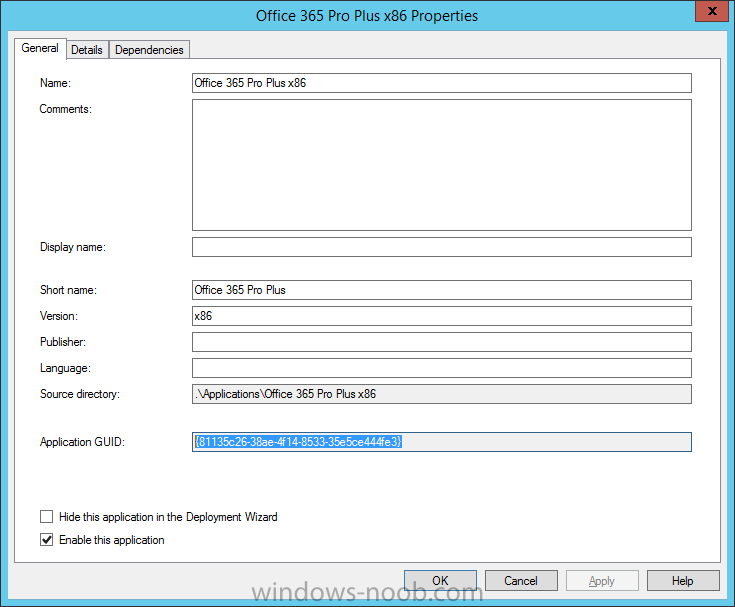 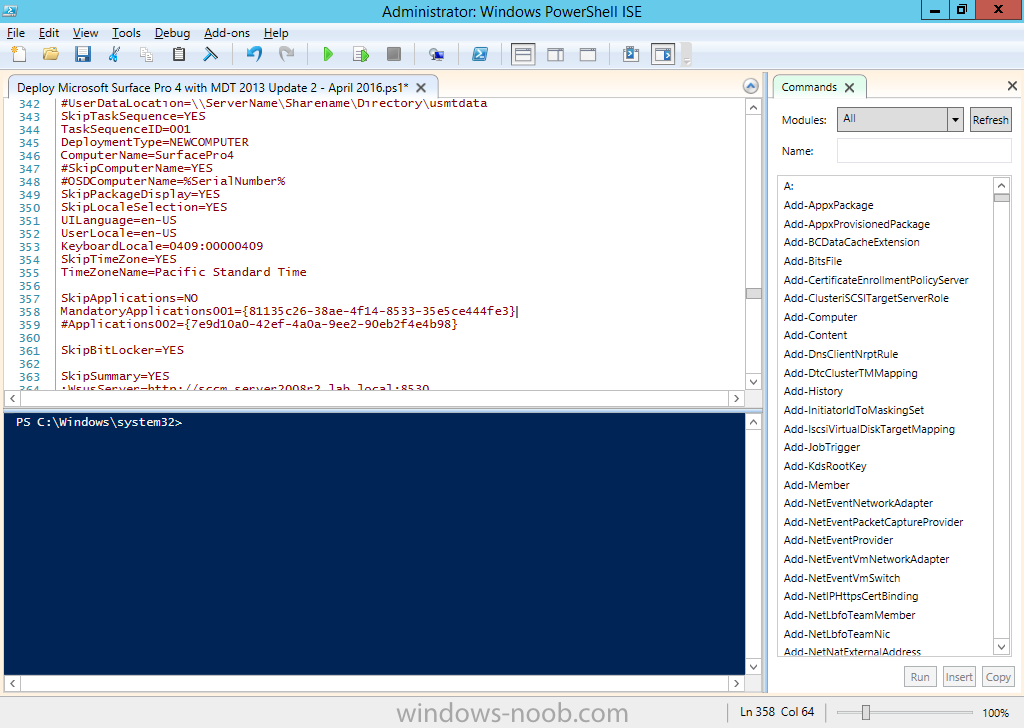 On the server that is to be your MDT server, start PowerShell ISE as Administrator. 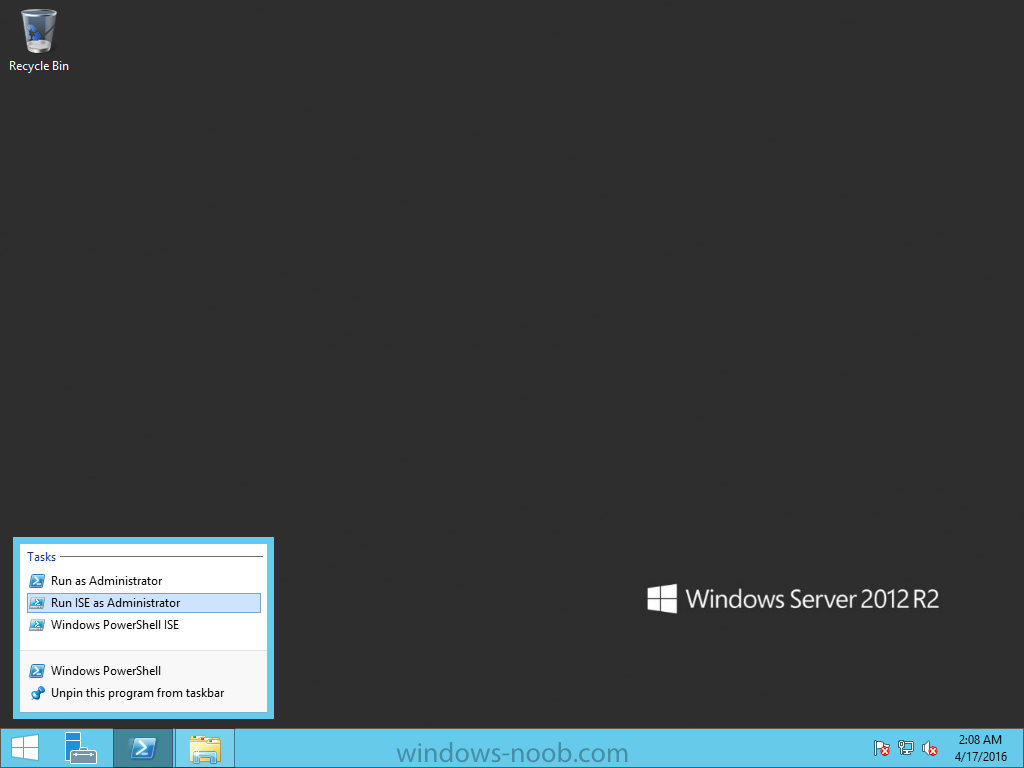 Click on the green triangle to run the script. Below you can see the script in action 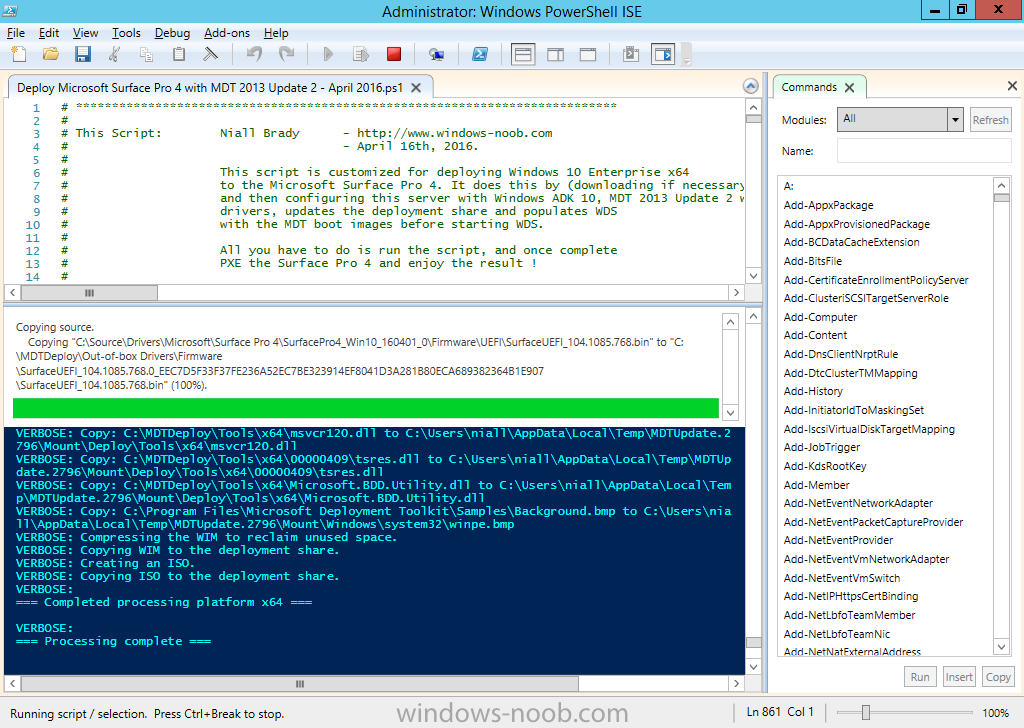 After the script is complete, you are ready to test deploying a Microsoft Surface Pro 4 installation. 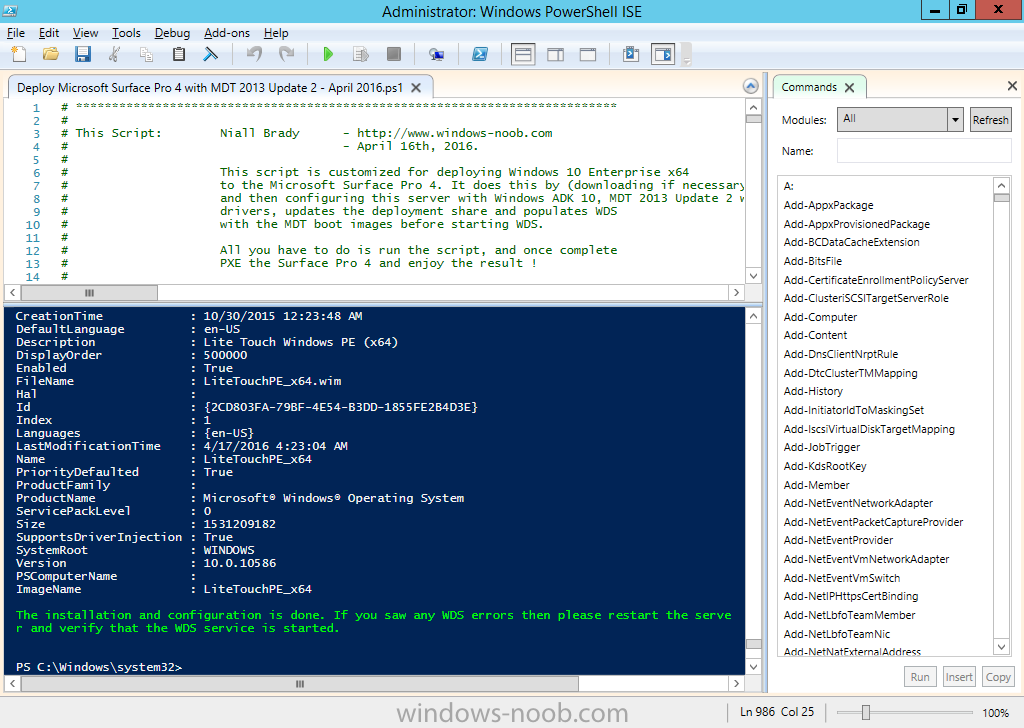 After running the script you can see that WDS is installed and that the LiteTouch_X64 boot wim is imported into WDS.

After opening the Deployment Workbench, you can see the Deploy Windows 10 x64 – Surface Pro 4 task sequence is created 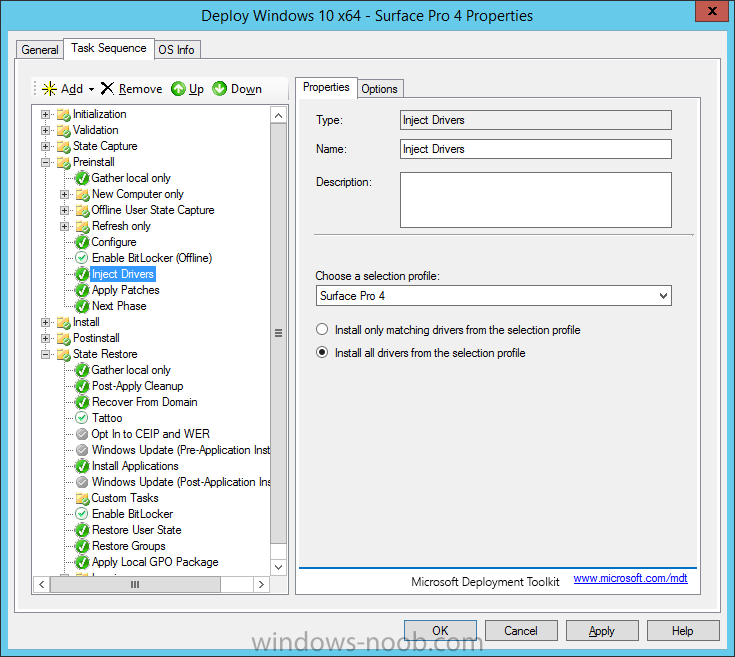 and the WMI query for the hardware is also added 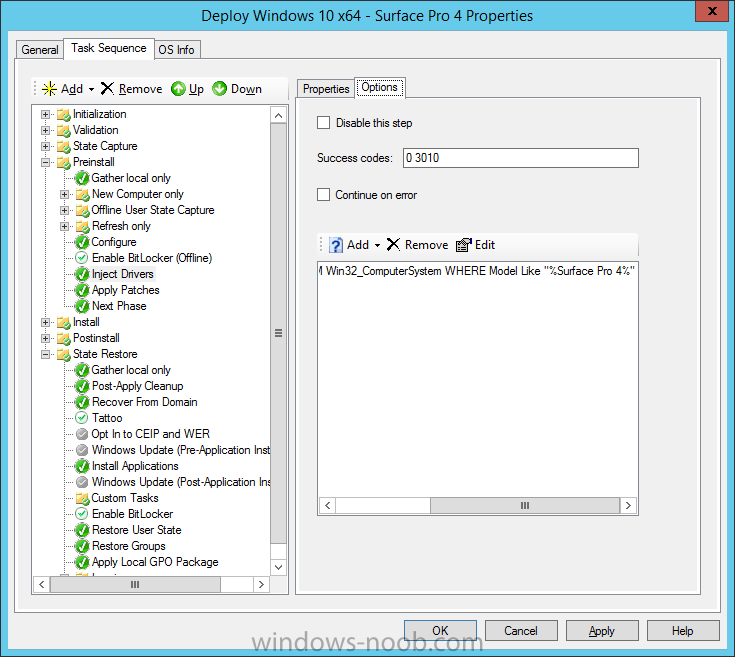 and drivers specific to the Surface Pro 4 are imported 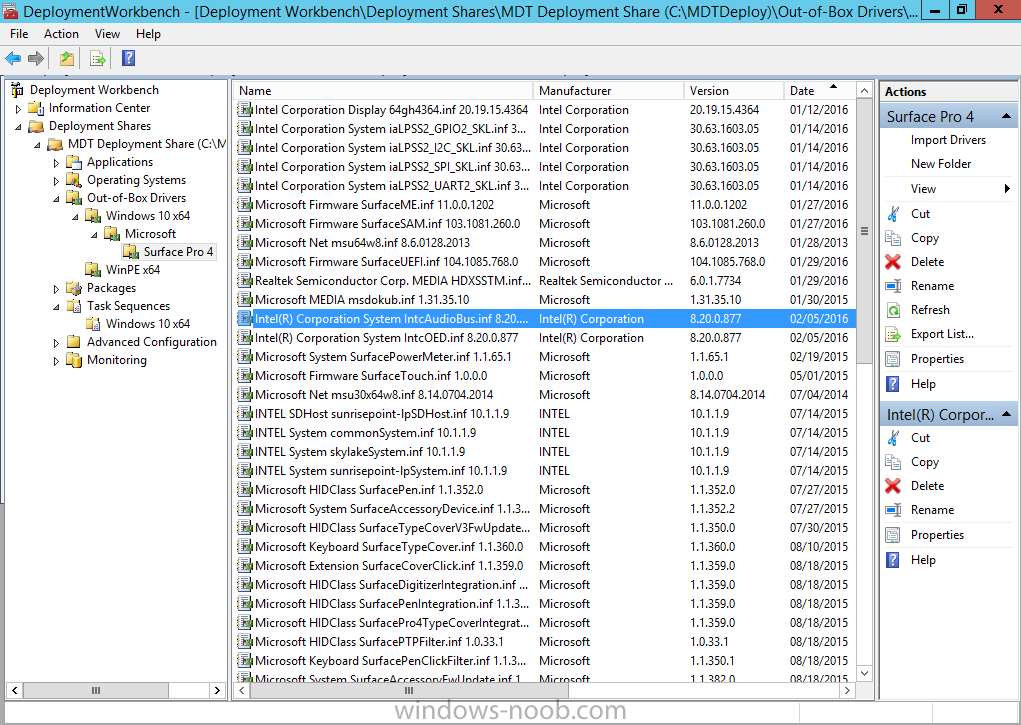 and custom selection profiles are created

Step 7. Sit back and watch the deployment

Take a properly shutdown Surface Pro 4, and power it on using the following sequence. Hold the down volume key and then press the power button while continuing to hold down the volume key, it should PXE boot. Press enter when prompted

and then it will load the MDT LitetouchPE_X64 boot wim.

before prompting you for a computer name, note that it’s currently set to SurfacePro4 in CustomSettings.ini contained within the script, 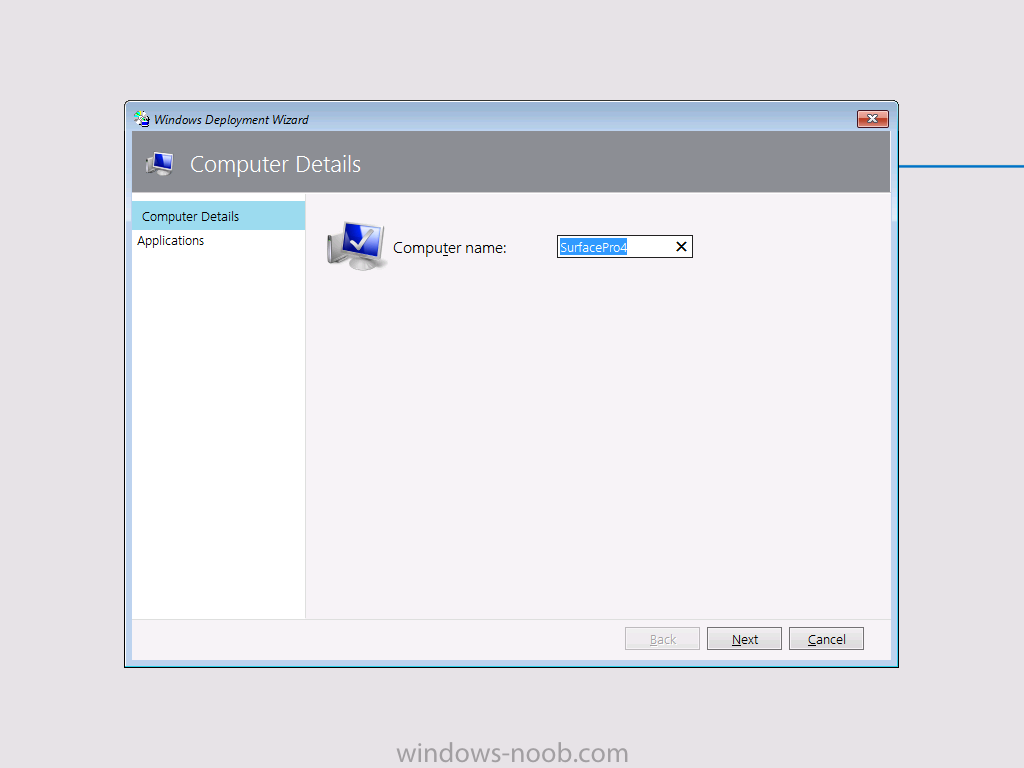 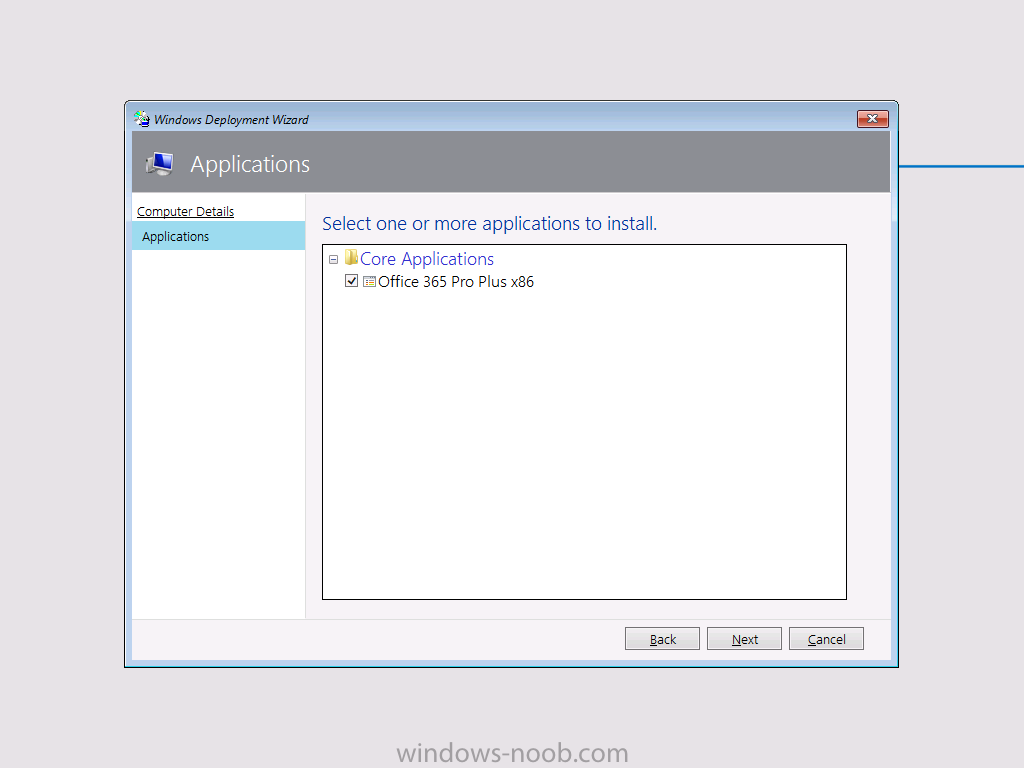 you can change that behavior in the UI itself (CustomSettings.ini on the Properties/Rules of the DeploymentShare) or automate it via the many methods available such as those that Mikael describes here 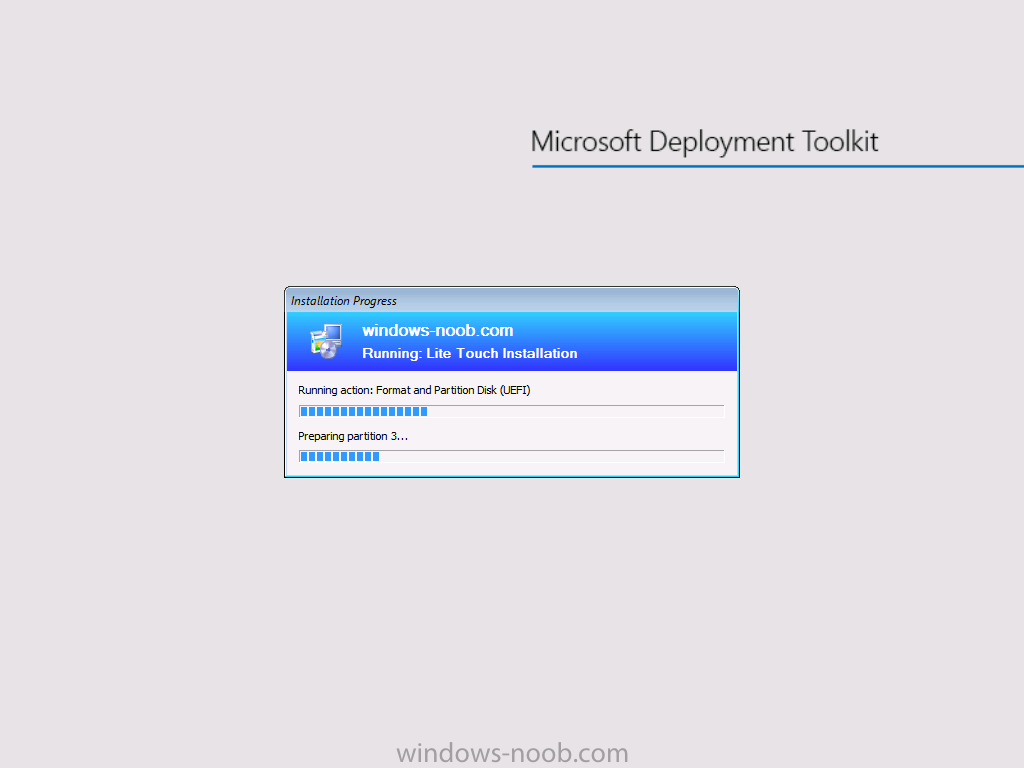 before installing the Applications.. 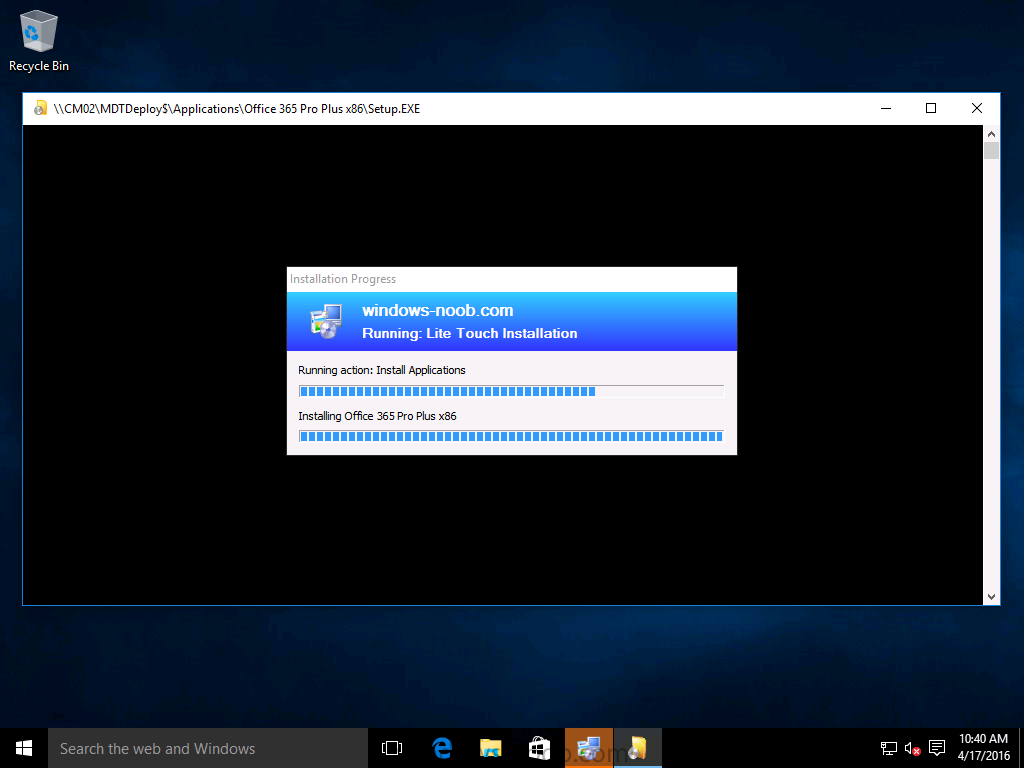 and finally it’s all complete ! 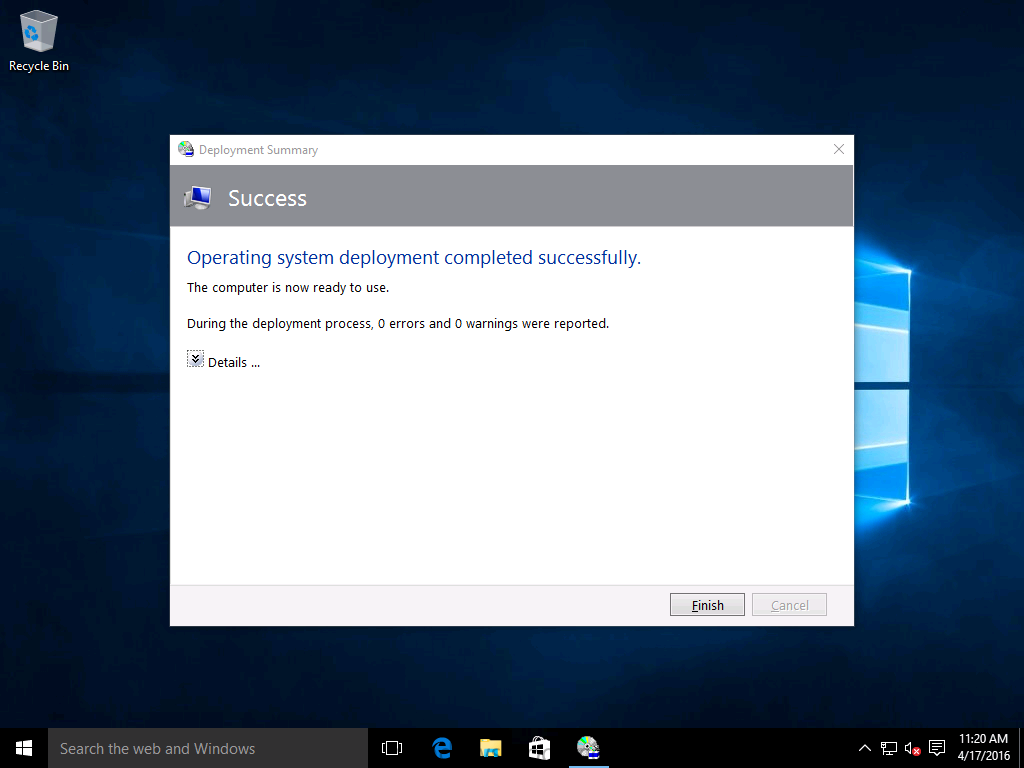 An error occurred while trying to execute the command.
Error Code: 0x41D
Error Description: The service did not respond to the start or control request in a timely fashion.

then restart the server, as you were asked to do at the end of the script ;-).

If you cannot PXE boot, because WDS is not accepting connections (revealed by the PXE Response tab in WDS properties), then look for the following error in the scripts output:

If you see that error, then the user you are logged in as does not have sufficient permissions to configure WDS. To resolve, make sure to Delegate permission in Active Directory for the User you are running this as, and allow that user Full Control of Computer Objects in that OU.

You can test whether the permission change works by issuing the following after the script is complete:

For deployment issues, you can review the logs found in the following locations depending on what part of the OSD process you are in:-

Automating the deployment of Windows 10 x64 Enterprise to the Microsoft Surface Pro 4 is possible and script-able with PowerShell and MDT 2013 Update 2.

You can download a Microsoft Word copy of this guide here –