Why is my System Center 2012 Configuration Manager console in read-only mode ?

There are actually valid reasons for the console being in read-only mode such as the ones listed below:-

in this case it ended up being an issue with my primary server and specifically with the SQL Broker Service. To find out how I determined what was the cause read on.

After powering  on one of my CM12 labs and logging on to the primary site P01 I noticed the following window popup when i started the Admin Console:

(Can you spot the missing ‘r’ in the message below ?) 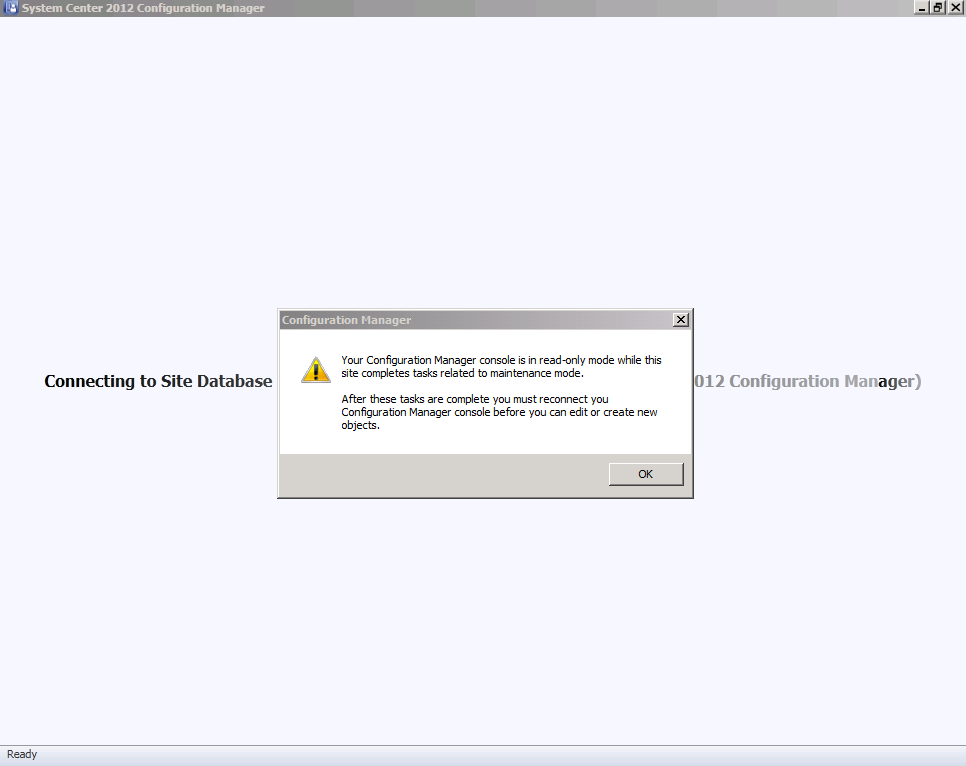 After you click OK you get to see the console but look at the title bar, Connected to READ-ONLY is clearly visible. 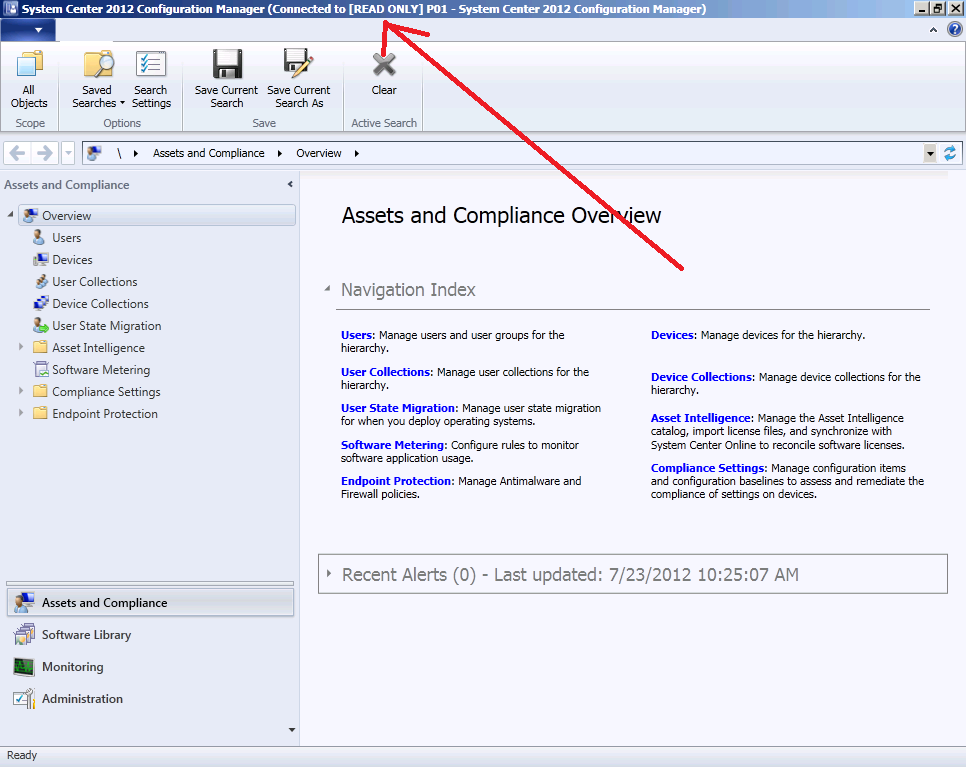 Looking at my Site Hierarchy I can see that the Global Data Replication Status is Unknown between CAS and my Primary site P01 (and vice versa) and in addition the Site Data Replication status is unknown. 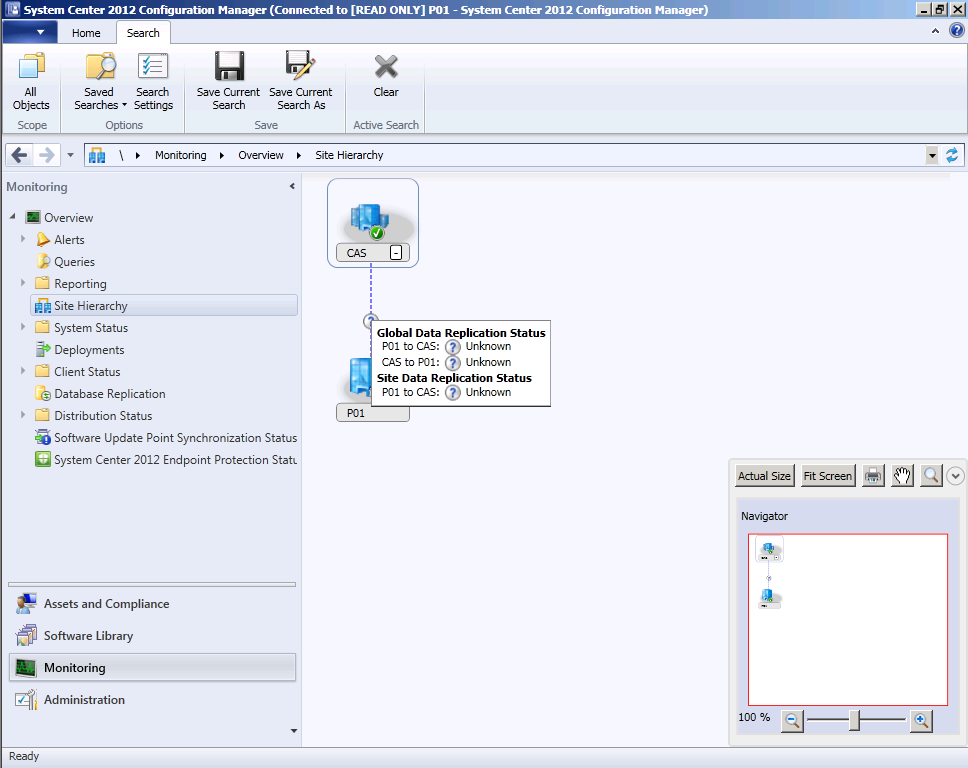 Looking further into this select Database Replication in the Monitoring workspace to get Database replication status, it was listed as Unknown 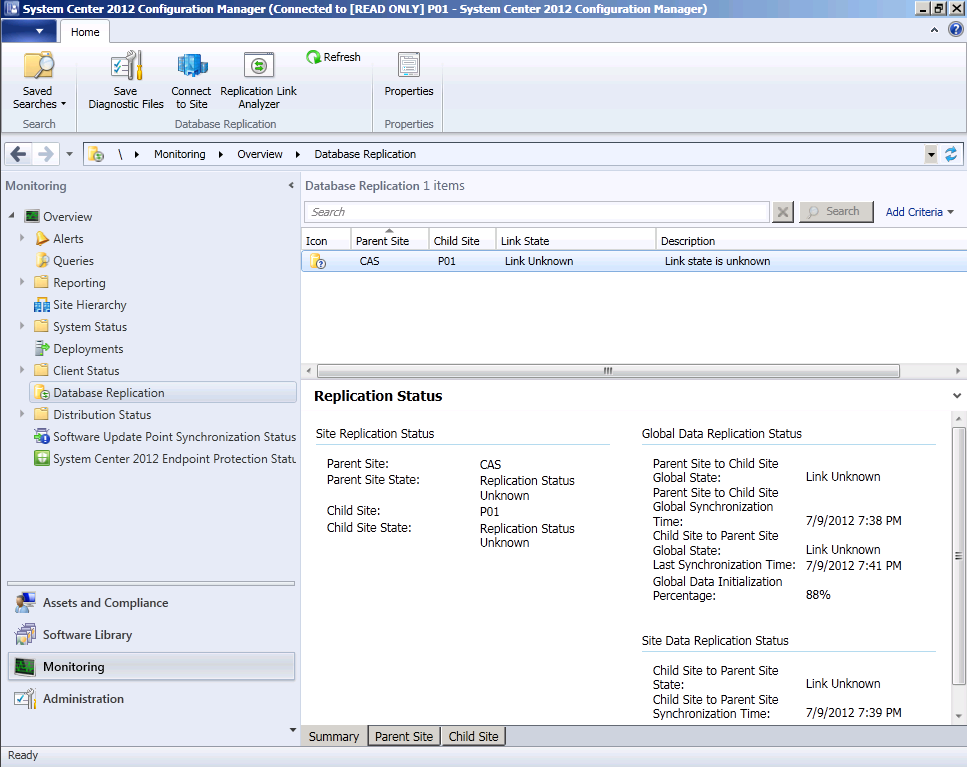 and finally opening the rcmctrl.log file in D:\Program Files\Microsoft Configuration Manager\Logs\rcmctrl.log reveals that the current site status is ReplicationMaintenance. In addition it states that the site is NOT active, so not  calling the DrsActivation Procedures. 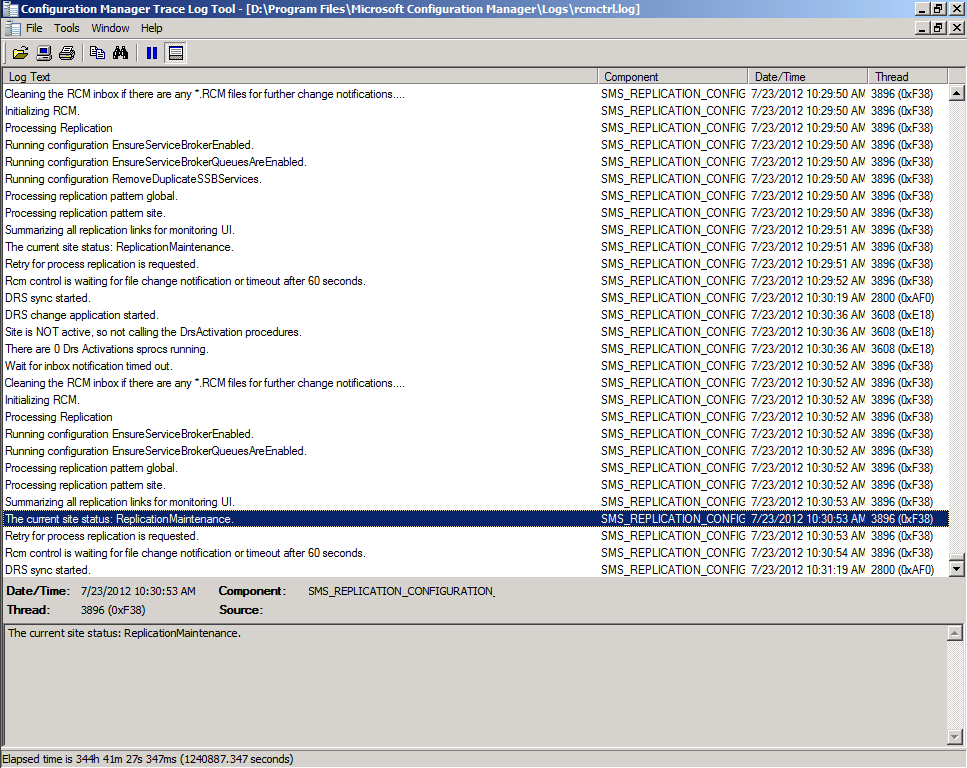 As I hadn’t powered on these virtual machines (one of my CM12 Labs) in a while, this was understandable, so it seemed that all I had to do was wait until it was complete. I waited over an hour and  the site was still the same according to the rcmctrl.log on P01.

To troubleshoot further, I logged on to the CAS server and after reviewing the Database Replication status on that server, I could see it  showed a different story, first of all the Administrator console opened with no problem on CAS and secondly Database replication was listed  as being Active on CAS but the link has failed between it and the primary child site. This was not good, link status can be in one of three states. 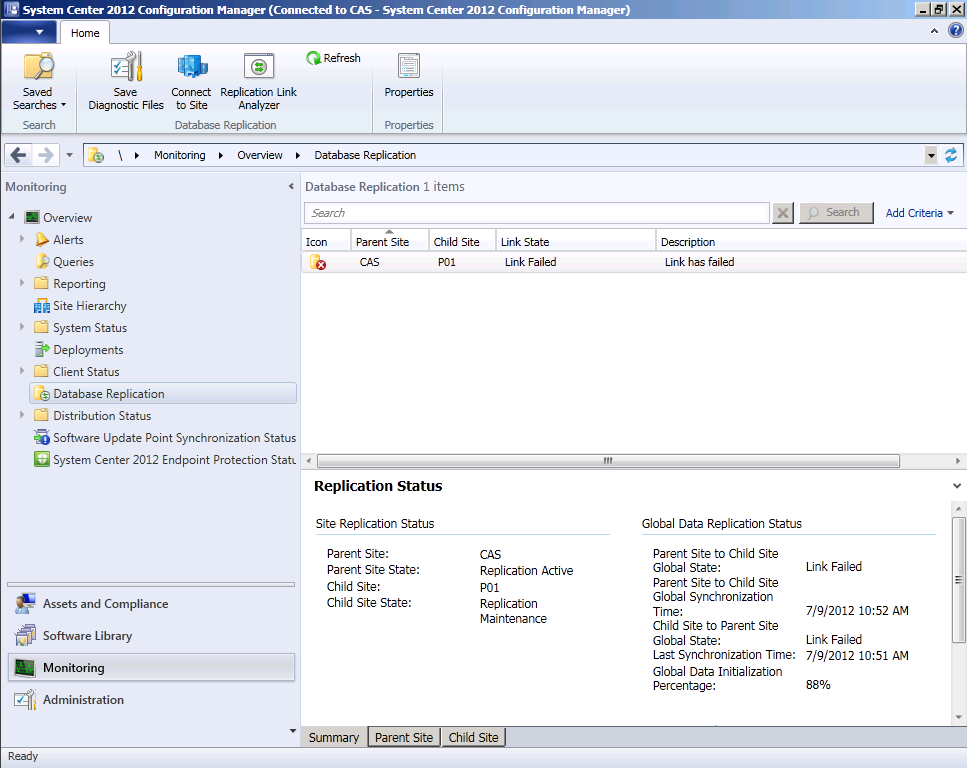 Now was a good a time as any to run the Replication Link Analyzer. I clicked on it and answered yes to the UAC prompt.  The replication link analyzer started. 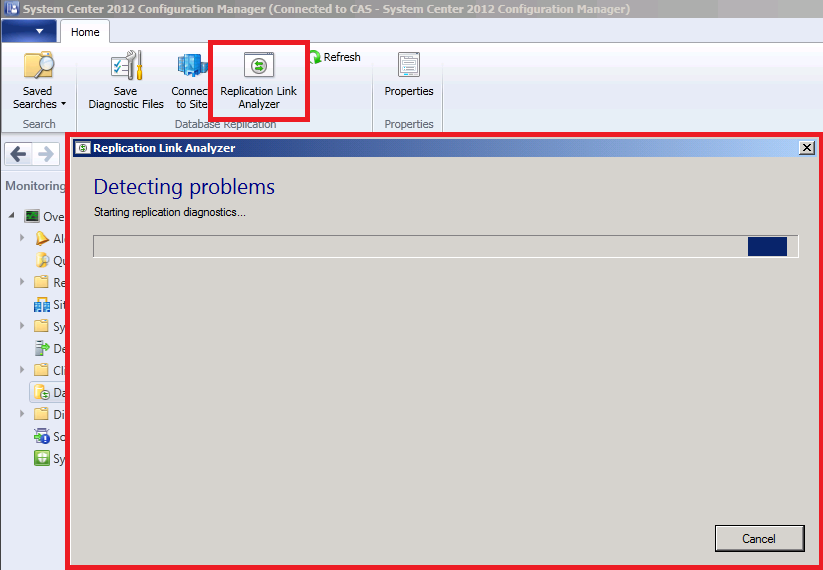 after a while it presented me with the following screen, which wanted to reset queued replication messages (or skip this rule) 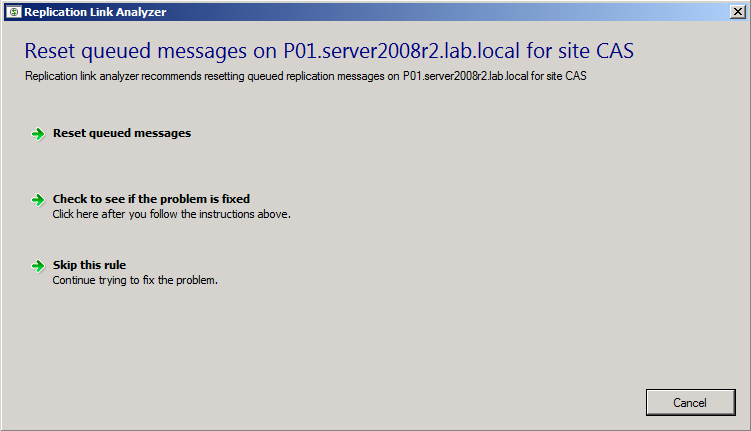 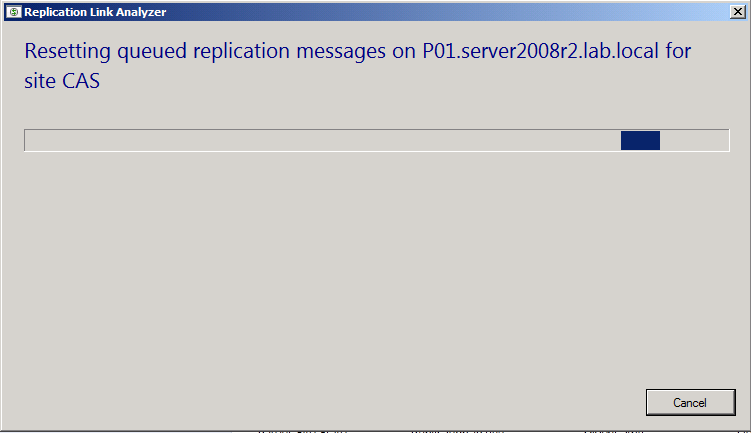 which produced a new message, namely that the timeout had expired while attempting to launch the Replication Link analyzer engine on P01, however it did provide me with a ReplicationLinkAnalysis.log file saved  on my Desktop. 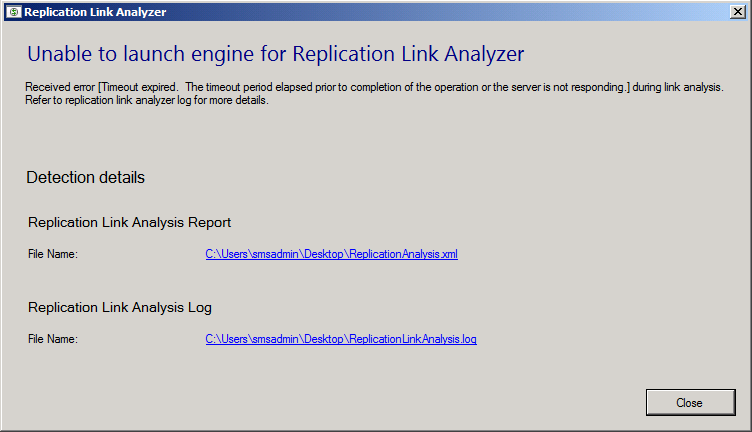 ReplicationLinkAnalysis Error: 1 : Timeout Expired. The timeout period elapsed prior to completion or the server is not responding. 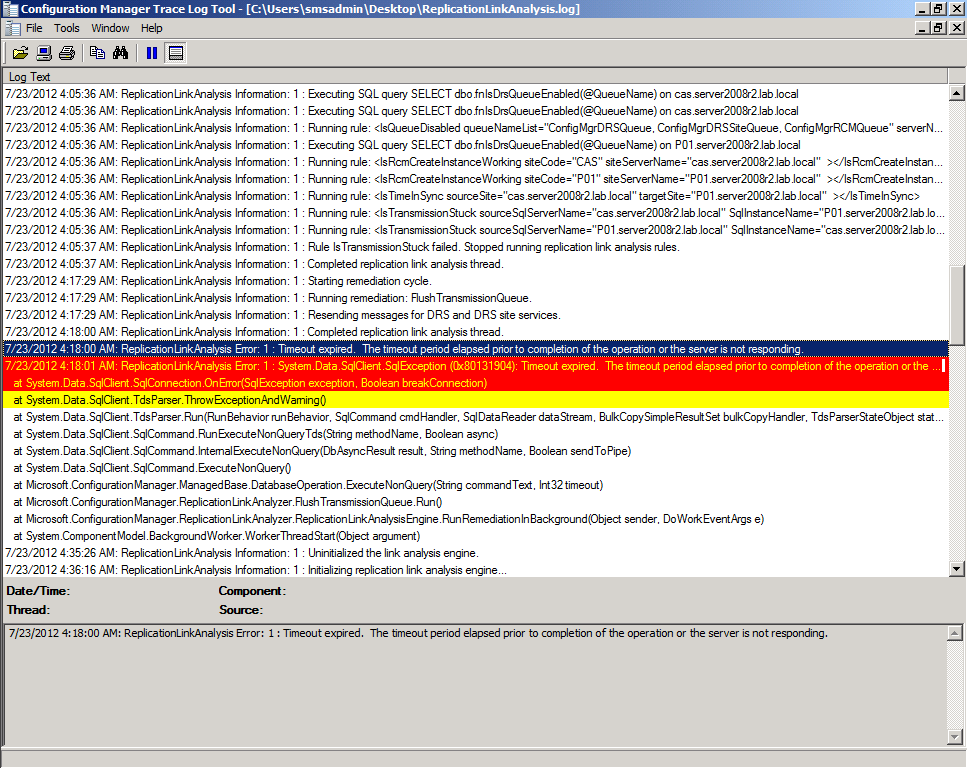 So basically the log file above is telling us that it stopped running tests due to the failure of one of the Replication Link Analyzer rules. These rules are listed in the ReplicationLinkAnalysis.xml file. The following rules are checked:

Looking at the ReplicationLinkAnalysis.XML file placed on the desktop we have more info  about the testing done by the replication link analyzer including where it failed, namely during the DoesBrokerConfigurationExist on P01. 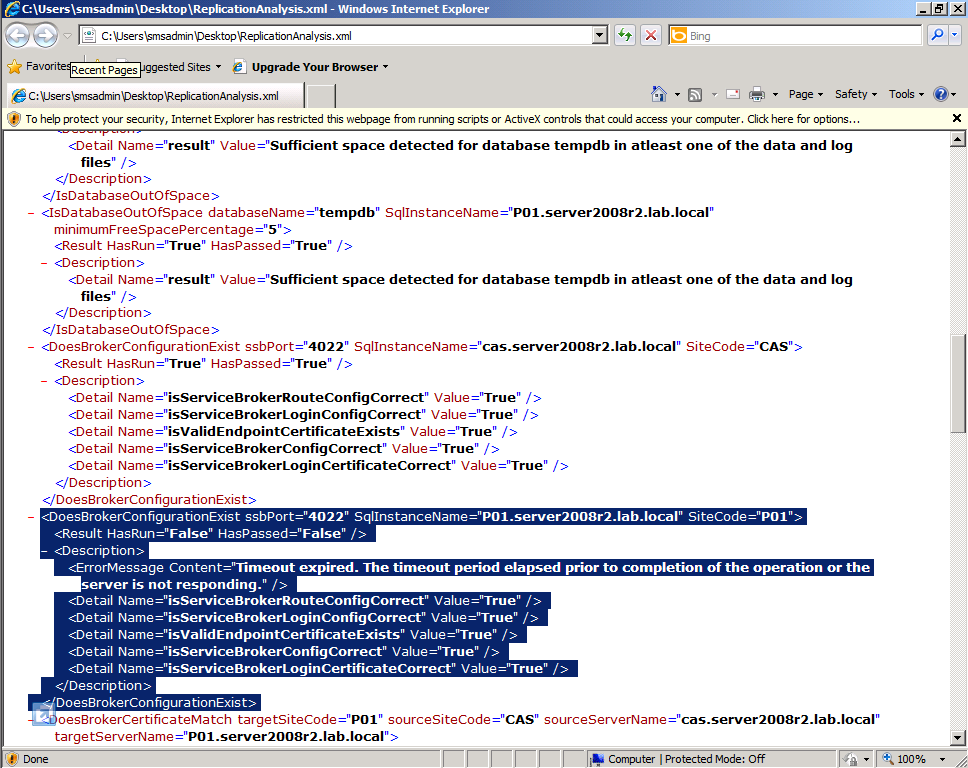 Now we know our issue is related to the SQL Broker Service, so we should check out the error log for SQL to see what it says, that error log is located at D:\Program Files\Microsoft SQL Server\MSSQL10_50.MSSQLSERVER\MSSQL\ErrorLog and that revealed SQL error 3961 which is:

Snapshot isolation transaction failed in database ‘%.*ls’ because the object accessed by the statement has been modified by a DDL statement in another concurrent transaction since the start of this transaction. It is disallowed because the metadata is not versioned.

Ok at this point it looks like the SQL database on P01 is confused,  probably due to server load at the time of booting up the server, and due to the fact that the SQL server itself was sitting on the same PID since the 4th of July along with more than  two weeks of the virtual machine being in a saved state. I could wait some more or try restarting the SMS Executive service or a reboot of the server. As this is my LAB I had enough of the troubleshooting and did a reboot.

After the reboot (of P01)  I ran the Replication Link Analyzer again (on CAS) and this time the SQL Broker Service on P01 was working however the site was still replicating, a few minutes later in rcmctrl.log  I could see that the Current Site Status had finally changed to ReplicationActive. 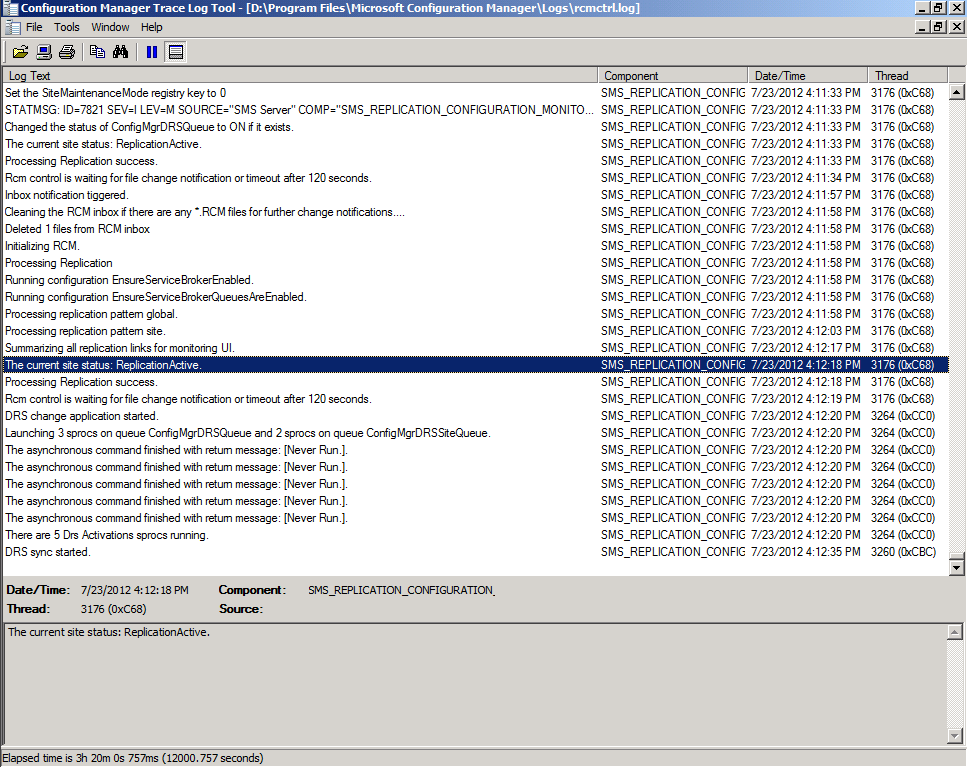 And that means that I can start the console again, without it being READ-ONLY ! 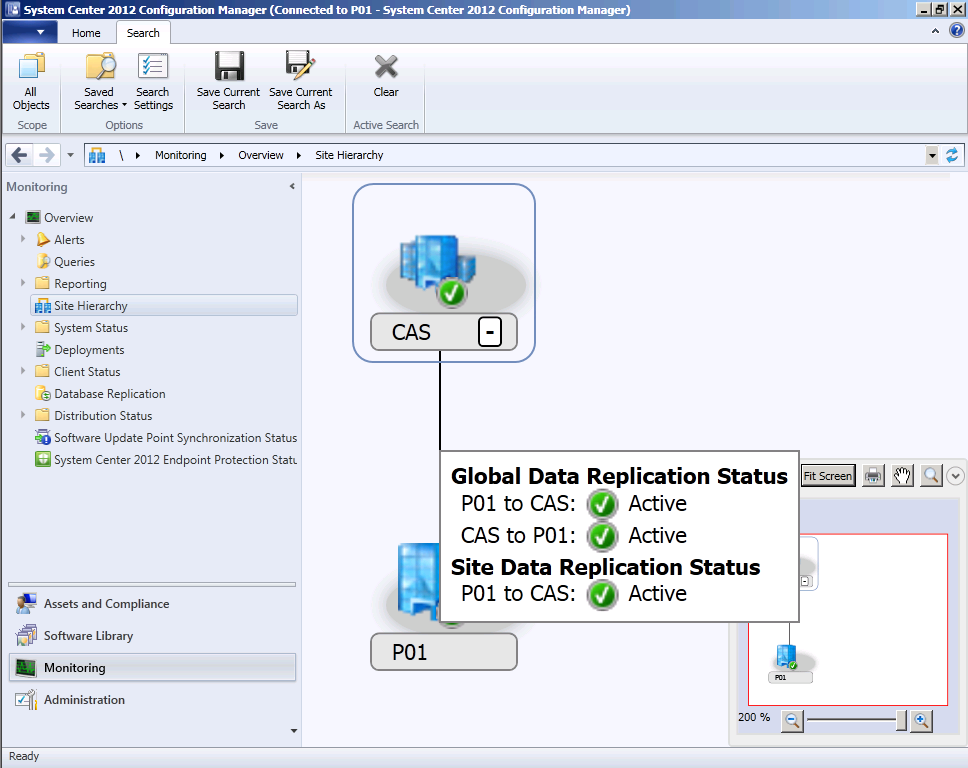 Hopefully this post will help you in troubleshooting site to site replication problems should they occur, to conclude please take note of the following:-

until next time, cheers

2 Responses to Why is my System Center 2012 Configuration Manager console in read-only mode ?